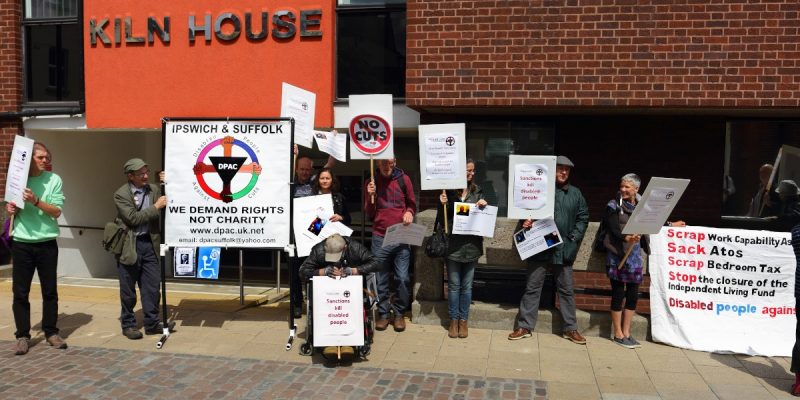 A decade ago as of October, David Cameron stood before delegates at the Conservative Party Conference and first conjured the [modern] image of the benefit scrounger into being. Though the idea of a ‘something for nothing culture’ has existed and been used by right wing politicians for decades, it was this turn that cemented the concept in the minds of the public. Its embodiment is the skiver, the lazy, entitled neighbour of the hardworking striver, who George Osborne argued was ‘leaving home in the dark hours of the early morning, [looking] up at the closed blinds of their next-door neighbour sleeping off a life on benefits.’

Over the coming years, assisted by the media running stigmatising programmes like Channel 4’s Benefits Street and campaigns like The Sun’s ‘Beat the Cheat’ hotline, the public was whipped up into a frenzy about the perceived high levels of benefit payments and welfare fraud. The coalition had no small part to play in these demonising headlines with perhaps the most egregious example being the transparent lie briefed to the national press that 70% of incapacity benefit claimants had been found fit for some form of work.

By the time the Welfare Reform Act (a piece of legislation that would cut £28bn from disabled people in its first five years) passed through parliament, 28 per cent of the public said welfare was the most important issue facing the country. This was over double the 13 per cent who cited Europe as a key political concern. That negative solidarity stoked, so effectively to harm those on disability benefits would in turn be used against migrants as Europe soon rapidly rose up the agenda. Meanwhile the public steadily lost interest as Universal Credit rolled out plunging many claimants into poverty.

The current crisis now means millions of those who actively supported, voted in 2019 to tacitly endorse, or merely didn’t care about such policies are now facing the stark reality of the hollowed out welfare state they created. It is one where claimants may still be sanctioned for not carrying out 35 hours of jobsearch during a global pandemic and mass recession with thousands applying for single entry-level roles.

The swelling in ranks means now more than ever is an opportunity to act. By unpicking the negative solidarity that has taken hold and in its place building bonds of solidarity between those who faced this past decade of demonisation, the newly unemployed can support and shield many from the worst harms of the benefits system. Such organising has a rich history to draw on, most notably in the claimant union movement that sprung up in the late ’60s and ’70s, mobilised claimants and those within their community to take action.

Birmingham was the home for the first claimant union, with hundreds more soon mushrooming in cities across the UK taking inspiration from their model. They were loosely grouped together under the National Federation of Claimant Unions banner, but rather than acting as branches, each new group existed as an autonomous union. In practice most followed the key principles of the ‘Birmingham Model’ such as avoiding moral judgement of each other, trusting one another and facing welfare officers collectively. Rather than merely providing emotional support, the latter meant fighting over claims and basic rules of payment as social security (SS) officers were far from consistent in their use of these rules, often basing decisions on personal conduct of the claimant. Leaflets were printed and circulated that instructed claimants ‘Never meet the SS alone, they never see you alone.’

When it comes to how to organise in this newly hostile environment, it is imperative to listen to and be led by those who have been most stigmatised by it

One key campaign fought by unions’ predominantly women members was against the ‘cohabitation rule’ and its loose interpretation by SS officers. At the time if a woman was even rumoured to be cohabiting with another man, and thus considered to be dependent on him and not the state, this was enough to have their benefits suspended. As a result women could be prevented from having sexual relationships or even close friendships with men, lest they face accusations from neighbours. Unions began national campaigns and demonstrations outside social security centres, taking the fight to government and SS officers as well as mobilising their communities. Calls were made to ‘stop sex snoopers’ and where it was known that public sector workers were being called on by SS officers to spy on women, claimants ensured post office workers unions stood in solidarity with them against the practice.

Organising with this tenacity meant across the UK numerous union branches had reached such levels of strength that they began treating jobcentres like a second home. Writing in 1972 Anna Coote paints a scene of union members ‘standing around exchanging information, conferring in corners, organising, handing out leaflets and words of encouragement.’

However, as subsequent Tory rule crippled the trade unions, so too did the claimant union movement dwindle. Entering a jobcentre today you are more likely to first encounter a G4S contracted security guard directing you to wait silently for your job coach. There is a lot to learn from the claimants of the 70s, and their efforts to collectively organise among themselves and their communities. But when it comes to how to organise in this newly hostile environment, it is imperative to listen to and be led by those who have been most stigmatised by it, and worked to tackle the more modern distrust many claimants face.

Grassroots disabled activists groups like Disabled People Against Cuts (DPAC), Mental Health Resistance Network and Recovery in the Bin, have doggedly fought welfare reforms and the toxic scrounger rhetoric using all the tools available to them. Protesting, lobbying, persistent legal challenges and crowdfunding to ensure claimants can have their assessments recorded, to ensure people are not denied the support they need.

Just last year DPAC Sheffield, embodying the spirit of the unions of the 70s, had had enough of the lies being peddled by the Department of Work & Pensions (DWP) to members of their community, and took action. The five week long ‘Myth Busting’ campaign run by the government with wraparound ads on the Metro paper extolling the benefits of Universal Credit (later judged to be unsubstantiated by the Advertising Standards Authority) had just started when they realised anyone was within their rights to take as many of a free paper as they wanted. Soon they crowdfunded costs and hired a van every day the papers landed, binning thousands and cutting off these mistruths right at the source.

The early months of the crisis brought an explosion in autonomously organised mutual aid networks and groups, often focused on ensuring access to medicines, food and other essential items. Renters’ unions have been active throughout, supporting members and resisting evictions. Claimant organising unions can be but another vital part of this constellation of mutual aid and the ongoing work to create a welfare society – it’s time to get to work.