What it would take to beat austerity

A week on, the feedback from the TUC demonstration seems broadly positive.  To seasoned marchers, it might have seemed like just another trudge along Embankment – but for many it was their first demonstration, and the sheer weight of numbers carried some exhilaration with it.

And yet, we remember: eight years ago, on those same streets, there were twice the numbers, or more.  And what difference did it make?  Labour ignored us, the war went ahead.  And, if they can, the present government will ignore us in their turn.  We know, if we are honest, that orderly demonstrations in central London will not stop the cuts.  Such demonstrations pose no threat to the profit or power of the ruling class: and this, we know, is what makes the difference.

Our task now is to sharpen exhilaration with analysis, and ask: what will it really take to stop the cuts?

Public sector strike action has already begun, as 3,000 NUT teachers and Unison support staff struck in Tower Hamlets on Wednesday.  National strike action in health, local government, education, and the civil service is likely before the autumn.  But in the last three decades, our movement has got used to fighting in a certain way.  Strikes typically last one day, and are tightly managed from above.  National executives call action off when they please, often on the flimsiest of pretexts; and there is little membership participation or control.

Two examples are the Unison disputes over pensions in 2007 and pay in 2008.  We could see something similar in the most recent two Royal Mail disputes.  In each case, the union settled for relatively minor concessions on the basis of very limited action and, more importantly, little genuine participation from strikers.   This is not entirely because union leaders hold their members back.  To an extent, their cowardice reflects the fact that the movement is weak at its base.  But that, in turn, reflects the fact that the movement has no prospect of rebuilding itself on the basis of the limits set by these, the official, methods.

The whole point of the anti-trade union laws, of course, is that whilst they are formally ‘democratic’, they do not correspond to the real dynamics of working class direct action and solidarity; which is – which always has been when effective – an unruly thing, bubbling up from below, crossing the boundaries of official ‘trade disputes’.

The old ways were not sufficient even for the old attacks.  And what we’re facing here is something more.

In 1995, the French working class faced a similar austerity package, including welfare and pension cuts.  Whilst there had been some important strikes in the preceding decades, the movement in general was unconfident.  Unions called a one-day strike in certain areas. What happened next took everyone by surprise.

Rather than just letting trade union officials run the strike, workers – first of all on the railways, then in other sectors – began to organise their strikes through mass assemblies.  These assemblies, which dissolved the divisions between unions at each workplace, reserved the right to determine the direction of strikes and the terms on which they would be ended.  They decided not to go back to work until their demands were met; immediately taking the movement into their own hands, making it more than just another prop for negotiators. Not only did they strike, they occupied; and they made sure it wasn’t only a public sector dispute, as strikes spread into the private sector, often without union authorisation.  Three and a half weeks later, almost all their demands had won.

This sort of thing isn’t impossible for us here.  The 2009 Tower Hamlets College strike lasted four weeks, and was organised by an open strike committee and regular assemblies open to all workers to discuss major decisions.  It was preceded by unofficial action: lecturers walking out in support of a janitor (in a different union) who was threatened with disciplinary action.  Earlier in the same year, thousands of energy construction workers defied laws on industrial action with impunity.

Like the 1995 movement in France, neither were perfect: but they shows we can go beyond the futile old routines.

Public sector workers are typically not engaged in the direct production of profit: we reproduce the society that allows the profit making sections to function, educating future workers (and looking after the younger ones), curing the ill, and doing our best to remedy the social chaos which capitalism routinely creates in the lives of the less well off.  We keep the tax rolling in, and the benefits rolling out.

Our own immediate power lies in disrupting this reproduction.  And we have to be prepared to use it.  To take just one example, consider what happens when teachers and school support staff go on strike as they did on Wednesday, in Tower Hamlets and Camden.  Schools closed.  Thousands of parents were unable to go to work, as they looked after their children.  The strike was just one day.  But what if that was extended?  What if nursery workers and college lecturers joined in, and the strike spread across London?  The economic impact would be huge, as parents of young children became unable to go to work.  During the 2008 NUT strike, the Local Government Association estimated that a million pupils stayed at home.

Many assume that such actions will fail because they ‘lose public support’.  But in France, support for severely disruptive strike action routinely runs at between 60 per cent and 80 per cent.  When other workers are feeling the squeeze as well, as they are now, they are more likely to be supportive: particularly if strikers appear confident and determined, and persuading the government to back down appears to be the best strategy to end the strike.

Aside from seeking to spread strikes to the private sector, what else we can do?  One idea, is that of economic blockades, used to some effect in France during the pensions struggle last year, by the successful student struggle in 2006, and by the piqueteros in Argentina in the late 1990s.  When workers cannot exert power by striking, they can do so by physically blocking the arteries of the economy: motorways, runways, docks, shopping centres, and so on.

The union leaders aren’t going to call a general strike, and there’s no sense calling on them to do so in order to ‘expose’ them.  Any extended strike which crosses union boundaries will be organised from below, by workers taking control of the movement and turning it to their purposes. It’s in our hands.

Tom Denning is a member of The Commune.  He has previous debated anti-cuts strategy with Richard Seymour at New Left Project. 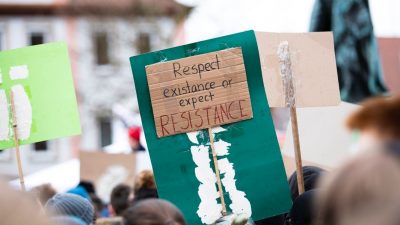