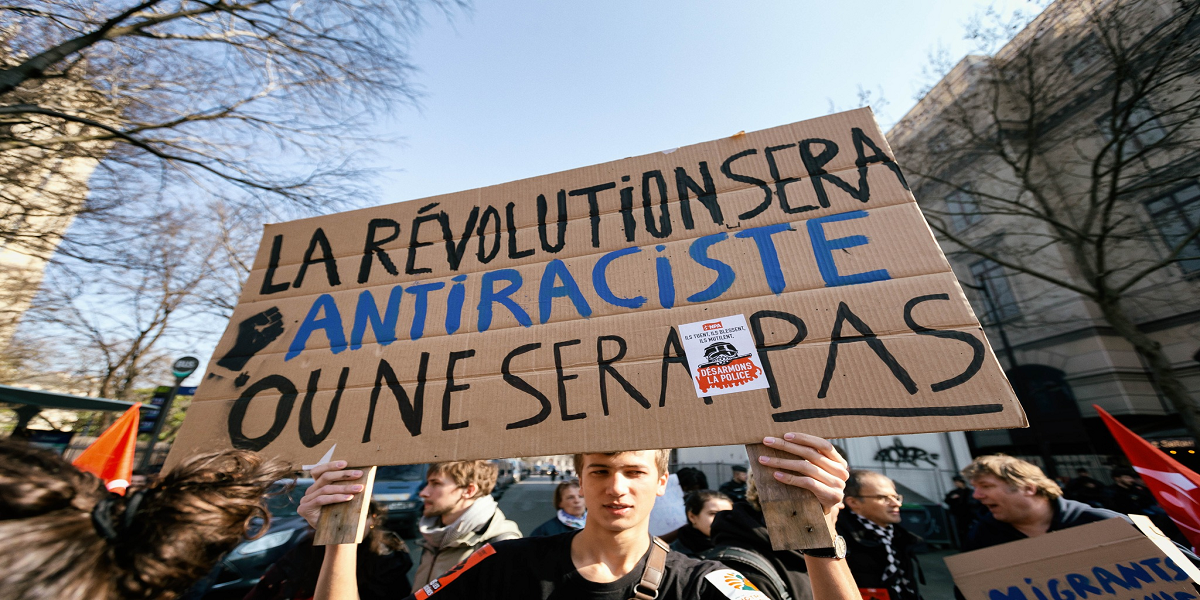 The revolution will be anti-racist or it will be not happen. Credit: Phototheque Rouge, Martin Noda, Hans Lucas

Never has a French presidential election been so boring. The first round of the 2022 election was a tragic repeat of what we saw in 2017 – the ongoing failure of mainstream parties, the complete absence of debates between candidates and, ultimately, the same choice in the second round.

This election’s surprising break with the past has been found in the street. Generally, in France, all street politics are suspended to give space to the various campaigns, yet there now seems to be a growing disconnect between social movements on the street and the electoral dynamics of the campaign. Or, in all likelihood, the disconnect emanates from above – the campaigns have become disconnected from the social problems below.

The results from the first round give an interesting insight into these social antagonisms. They show significant levels of polarisation between urban and suburban areas where radical left votes are found and the fascist vote of the more rural areas. Le Pen’s vote is more geographically spread than ever before. Meanwhile, Mélenchon’s Union Populaire movement saw impressive results in the main cities, Caribbean colonies and the banlieues. In the colonies and the banlieues, Mélenchon won with an absolute majority.

Since 2017, Mélenchon has been the main electoral hope of the left and while his campaign has energised millions of people around the country, it seems to always fall short when it comes to electoral politics. Like the last election, his campaign has driven an impressive amount of energy among people and 100,000 people marched in support for constitutional change (a call the Mélenchon campaign supported). Yet, Mélenchon’s 2017 party machine, La France Insoumise, and his 2022 effort, Union Populaire, did not reach the second round. Internal party mechanisms are opaque and it remains unclear how democracy works inside the machines as the framework changes every five years.

Unlike 2017, the failure of the traditional left (the French communist party refused to back Mélenchon) presented the opportunity to build new solidarities. Mélenchon vocally denounced islamophobia on the campaign trail, energising a rank and file movement of anti-racist activists. Even Muslim organisations, which tend to be generally apolitical, called for a Mélenchon vote. This alliance is largely unprecedented, and could represent the beginning of a larger reconciliation between the left and working class Muslims and other non-white demographics. Ultimately, however, the defeat of Mélenchon felt familiar to many, and ended once again with abstract calls to resist the rising tide of fascism. These events act as an important reminder that hope for change does not lie behind one homme providentiel and his electoral machines.

The growing disconnect between electoral politics and the necessities of the political situation can be neatly summarised by the complete absence of a wider anti-fascist movement in France. It is clear for left parties, from the Socialist Party to La France Insoumise and Union Populaire, that the fascist threat can be supposedly fought off through electoral campaigns – simply vote for us and we will get rid of them. This point of view presupposes the legitimacy of the fascist vote, and posits that they just have to be challenged or successfully debated through the media. Yet it is the media themselves that gives candidates like Zemmour plenty of space to promote their conspiracies and far-right vitriol.

State policy has too played an important role in growing France’s fascist wave. The rampant targeting of Muslims in public life, exemplified by the separatist law, is fertile ground for the racism and xenophobia at the heart of the Le Pen and Zemmour campaigns. The attacks now extend towards what they name ‘wokism’, a collection of LGBTQ+, feminist and anti-racist campaigners. State ministers even staged and supported an ‘anti-woke’ symposium at La Sorbonne and have happily stood alongside fascists in this so-called ideological battle. While Macron may try to turn back the tide in between the first and second round, praising a woman wearing a hijab for her inclusive ideas and generally using his faux-progressivism to attack Le Pen, yet it remains unclear if the forces he has helped create may now topple him. Especially given predictions that many of the left will abstain in the second round.

The future of the left? 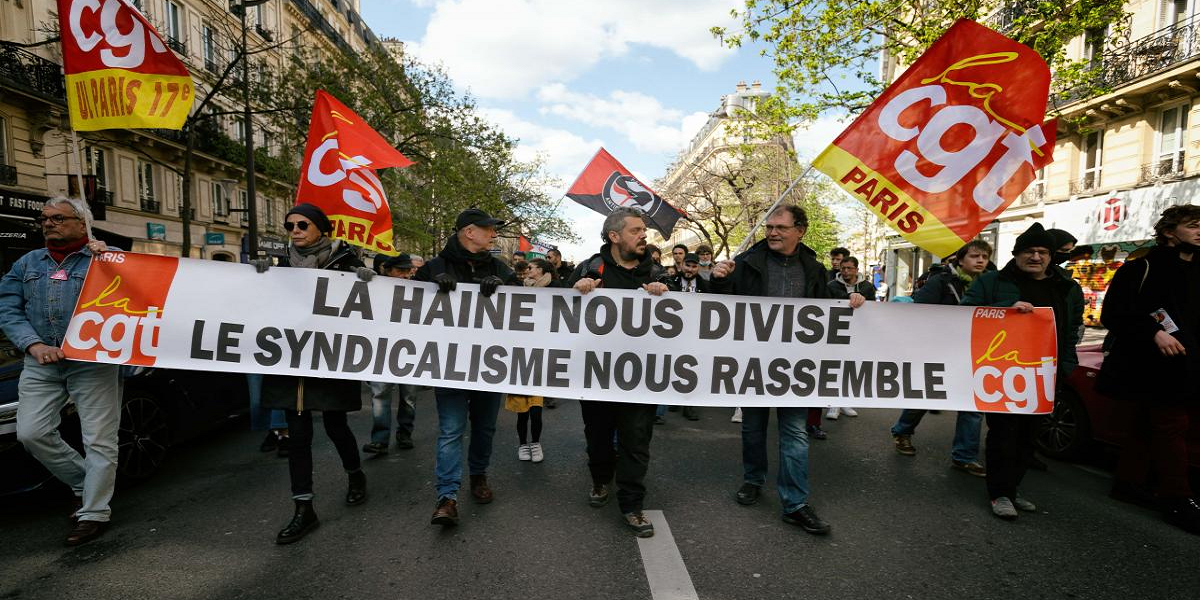 Hope is ultimately to be found among the movements that did not halt for the electoral campaign. Among them is the feminist movement which has benefited from the wave of feminist strikes across the globe in recent years. On the 8 March, a feminist strike was called by the trade unions, feminist groups and left parties. It gathered around 35,000 people in Paris. On 9 March, around 5,000 people marched in Paris against racism, police violence and islamophobia. Very few trade unions or those of the traditional left parties took part in this march. Instead, Mélenchon’s Union Populaire mobilised 100,000 people the day after for its own march.

There is a big temptation to read Mélenchon’s unexpected, but limited, success as a call to continue the electoral strategy. However, because of the limits of France’s constitution, and the paralysis that the electoral rules creates, this route is fraught with difficulties. Countering France’s fascist upsurge cannot be limited to voting. For another political project to exist, the left must amplify politics on the street.

There are organisations in France, like the NPA, who are active, yet the absence of a wider movement that can challenge the dominant ideology remains puzzling. Class consciousness is very strong among multiple generations of migrants – electoral results from the banlieues is evidence enough of this. Yet the absence of these demographics in key institutions is typical of a left that seeks to build an insular movement around itself. Ultimately, a successful left can only emerge if people of colour, feminists and the LGBTQ+ movements sit at its heart.

Selma Oumari is a French-Algerian activist based in Paris.