“It’s not how much money we make, but how we make the money that counts.” It’s a touching sentiment, and one that many businesses would do well to abide by.

It’s not necessarily a point one expects to hear from the Chair of Europe’s biggest arms company. But it’s one that BAE Systems’ Chair, Roger Carr, returned to repeatedly at his company’s Annual General Meeting (AGM).

It’s a strange feeling to own shares in a company that you are actively opposed to. However, it’s something that a lot of anti arms-trade activists do in order to attend BAE’s AGM, which is the one public opportunity we get to ask them hard questions and hold them to account.

It’s not for the faint-hearted. It’s like stepping into a parallel universe where war is seen as an inevitable step on the road to peace, and where the peacemakers of the world are those that buy and sell weapons.

The money line was one of many bizarre and hypocritical platitudes offered by Carr, who also told us that “war has terrible consequences and nobody wants these consequences” and that “the end of war would be good thing for humanity.”

Carr’s contribution to the cause of peace is to lead a company that sells weapons around the world. It is an unfortunate point for his argument that many of the terrible consequences of war that he rightly alludes to have been caused by BAE’s weapons.

This is particularly true in Yemen, where Saudi-led forces are using BAE’s fighter jets to inflict a terrible humanitarian crisis. Tens of thousands of people have been killed as a direct result of the war. Many more have died as a result of the destroyed health infrastructure and the spread of preventable diseases.

Save The Children has found that over 50,000 children died in 2017 alone as a result of starvation  and a lack of access to healthcare. Perhaps the BAE board is horrified by their deaths, but it is also profiting from them.

Only last month, Saudi forces bombed a wedding, killing at least 20 people including the bride. It began as a day of celebration and ended as a massacre. Carr’s conscientious mask slipped when he was asked if he knew if BAE’s weapons has been used in the massacre. ‘You don’t know. We don’t know,’ he snapped at the vicar in the audience who had posed the question.

“We are not involved in the prosecution of war” he insisted. Referring to the ‘clear line’ that exists between the sale of arms and the use of arms, Carr claimed that BAE’s work is “in the maintenance and support, and the supply of equipment” but “the use of that equipment is for others.

One would think that if Carr and his team were really interested in stopping the terrible consequences of war then the least they could do would be to put procedures in place to ensure their weapons are not being used to bomb weddings. Or schools. Or hospitals. Or funerals.

The problem is that they can’t. BAE’s entire business model is based on perpetual war and conflict. To ask questions or to take any kind of real moral stand whatsoever would be to jeopardise their position as a major global arms exporter.

At present BAE is in negotiations to sell a new set of fighter jets to the Saudi regime. The deal could be worth billions of pounds to the company. Why would it undermine its chance to cash in by asking even the most basic questions about human rights?

Instead Carr and his colleagues hide behind the flimsy shield of government. Time and again Carr assured the room that all of these sales were fine because they were overseen by the government’s supposedly rigorous arms export control system.

It is a system that has seen government working hand-in-hand with BAE to maximise sales. As Bob Keen, head of government relations at BAE, told the House of Commons Defence Committee “it simply is not possible to do a major defence deal without fundamental government support.”

The AGM ended on a sour note for Carr, with questions from a pro-democracy Bahraini activist exiled in the UK. “Myself, my family and indeed my people are victims of your work” said the activist, only for Carr to cut him off by asking the room, which was at least 90% full of BAE employees, to clap if they wanted him to move on and ignore the questions (which they did.)

And that was that. For all of the board’s talk of peace and good ethics it will return to negotiations to sell even more fighter jets to the Saudi dictatorship. We, any many others, will continue doing everything that we can to stop them. 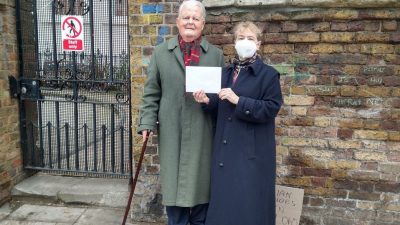