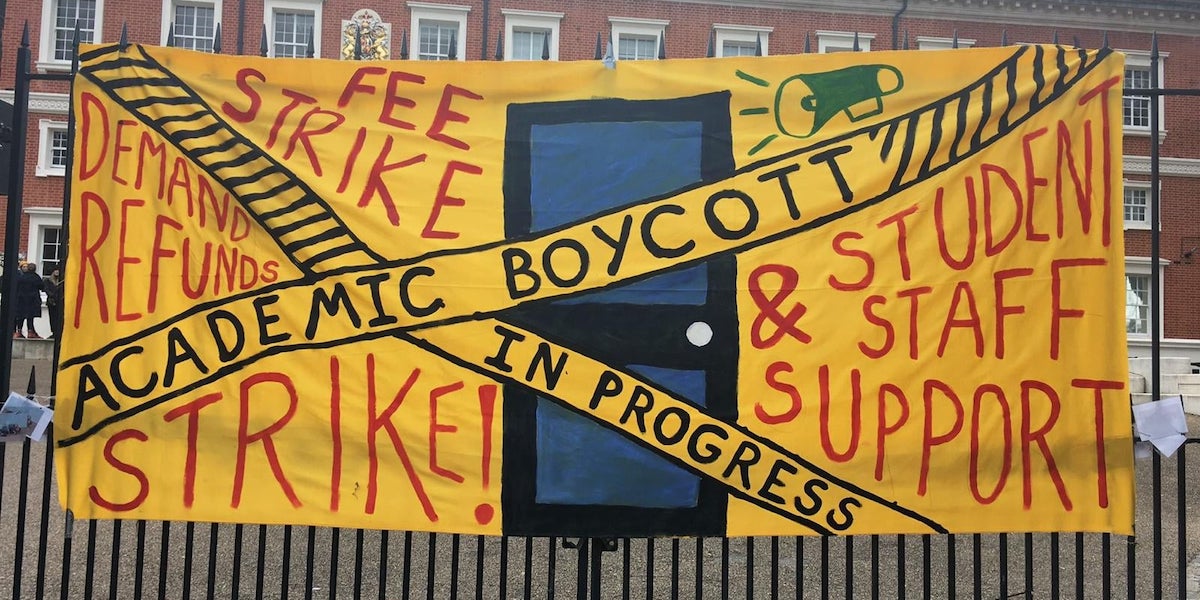 A banner outside the main gates of Goldsmiths, University London (Goldsmiths UCU Facebook)

Red Pepper has launched a vital Crowdfunder to lay the foundations for our future. Donate today!

In late summer 2021, the Goldsmiths, University of London, senior management team announced its ‘recovery programme’. Due to financial difficulties, it stated, the university would be going ahead with largescale redundancies, a ‘cost-saving measure’ intended to bring the university long-term stability.

This first tranche of redundancies calls for up to 14 jobs in the departments of english and creative writing and history to be axed, as well as 32 administrative roles across student-facing services. Alongside these redundancies, management is trying to force through major restructures of administrative work and a wideranging curriculum review.

As the rationale grows increasingly threadbare with improving financial forecasts, however, the ideological dimension of these proposals is becoming clearer.

As a specialised university with an emphasis on the arts, critical humanities and social sciences, as well as strong programmes in education and social work, Goldsmiths has struggled with a hostile political climate for years. The increasing prominence of monitoring metrics in higher education, often unsuited to the strengths of institutions such as Goldsmiths, government cuts and ideological attacks on many of our subject areas have all contributed to a palpable sense of crisis across the sector.

In response, Goldsmiths’ senior management has entered into financial agreements with Lloyds and NatWest banks, brokered by the increasingly scandal-ridden accountancy firm KPMG, which have directly shaped the programme of redundancy and restructure.

The cuts threaten ground-breaking programs such as the masters degrees in queer history and black British literature, as well as the kind of administrative support and care that helps make higher education more accessible.

We are seeing an escalating financialisation of the university, with third-party banks and financial organisations determining the direction of what is, in principle, a public institution committed to education. Accompanying this is an ever-increasing spend on senior management salaries and consultants, and a devaluing of students’ education and the working conditions of front-line teaching and administrative staff.

As with many austerity measures, the immediate effects may be felt unevenly, but the longer-term results will impact everyone.

Those of us working and studying at Goldsmiths are confronted with the possibility of losing our jobs in the midst of a pandemic, or being left to pick up the pieces when the friends and colleagues we’ve relied on for friendship and support through these bleak years are forced out.

The picture at Goldsmiths will, sadly, be familiar to anyone working in higher education in England today. Cuts, managerialism, casualisation and ideological attacks on the democratic value of education have left many of us feeling dazed and defeated. However, workers and students in higher education have been coming together to find common ground and ways to resist.

Grassroots unions such as the Independent Workers Union of Great Britain (IWGB) and United Voices of the World (UVW) have led a sustained and successful fightback against the outsourcing of cleaners and security guards across the public sector with hard fought, high-profile victories in several universities. Casualised lecturers have built networks across the sector, and the University and College Union (UCU) has made casualisation a central issue in ongoing national disputes.

In the past year, local UCU branches at Chester and Liverpool have defeated threats of redundancies through sustained campaigning and strikes, demonstrating the importance of strong local organisation and solidarity.

All of these struggles demonstrate that while the attacks on our working conditions are fierce, it is still important to resist and possible to win.

This is a lesson we’ve learned at Goldsmiths too. An earlier iteration of the recovery programme was stopped by staff and student resistance, while an attempt to slash budgets for hourly-paid lecturers was halted with a successful wildcat marking boycott in the summer of 2020. The current wave of redundancies was delayed by a year due to industrial action last summer.

In the years preceding this upsurge in local disputes for our branch, cleaners and security guards had campaigned successfully to end outsourcing of their jobs, and students organised through Goldsmiths Anti-Racist Action carried out a four-and- a-half-months occupation against institutional racism at the university.

Most recently, short course tutors at Goldsmiths have won important gains towards employment rights (they are currently fundraising for a tribunal here). These struggles have intersected and linked in various ways, opening new possibilities for resistance.

At the time of writing*, Goldsmiths UCU has carried out three weeks of sustained strike action, demonstrating our willingness to stand up for each other and make it clear that any proposed redundancies will be met with resistance.

Students, staff, and community activists organised through the network Goldsmiths Community Solidarity created a wide-ranging teach-out programme that in some ways prefigured the kind of community of learning we hope to build.

We have not yet defeated these cuts and are preparing to take further action in February and March if necessary (you can make a donation to our strike fund here).  UCU has also greylisted Goldsmiths, placing it under academic boycott.

With the solidarity in our branch and the support we have been shown by students, community organisations and the trade union movement, we are confident in our capacity to keep fighting.

The financialisation and restructuring of higher education has resulted in a fragmented sector, with institutions competing against one another for student fees and a segmented workforce characterised by casualisation.

To organise in a sector with so many divergent, at times even conflicting experiences and priorities is by no means an easy task. The challenge for workers and activists in higher education today is to turn that fragmentation into solidarity and a diversity of tactics that can win.

This is important not only to defend our working conditions in the short term, but to stand up against the destruction of public assets and services along with our colleagues across education and the public sector as a whole.

Our universities are there to ensure high-quality, accessible education for all; we cannot allow something so important to be destroyed in the short-term pursuit of profit.

* This article first appeared in issue #235, ‘Educate, agitate, organise’, published in early March 2022 (subscribe here to get your copy). On April 8, 16 members of Goldsmiths staff, including prominent members of the UCU Branch, were notified via email that they had been made redundant. At the time of online publication, the wider Goldsmiths community are planning next steps in their fight against the dismantling of a once-proudly radical institution.