Mythbuster: The truth about the unions

As the Tories and their pals in the press ratchet up the anti-strike rhetoric, Red Pepper knocks down some of the myths they throw at the unions

MYTH: Unions strike at the ﬁrst opportunity, without a thought for the consequences

Nobody takes the decision to strike lightly. Strikes are very expensive – the cost to the unions of 30 November, including ballots, will be millions of pounds. Union members will sacriﬁce up to £100 million in pay altogether.

The unions are taking action because other options have been blocked by the government. It effectively froze negotiations. It is only the threat of strikes that has led to any change in the government’s position.

When the unions do eventually decide they have to resort to strikes, they discuss with employers to organise emergency cover and ensure that no one is in danger and vulnerable people are not harmed.

Home care for the elderly, urgent operations and accident and emergency departments all continue to function. Unions agree with employers that enough people are exempt from the strike to make sure this is the case.

Public sector workers are less motivated by their own pay and conditions than by a strong public service ethos. 53 per cent of NHS staff regularly work additional unpaid hours over and above their contract (Annual NHS Staff Survey). The most common reason for working unpaid hours was ‘because I want to provide the best care I can’.

Public sector unions play a key social justice role, campaigning for decent public services for all. They would like to be striking to this end, but that is illegal. They are only allowed to take action over their own pay and conditions.

But good conditions are part of ensuring quality public services – after all, services will be better if the workers providing them are secure about their futures, rather than anxious.

Unions can hardly be accused of representing ‘sectional interests’ when they do so much campaigning on wider issues such as anti-racism and freedom for Palestine.

MYTH: Unions are a thing of the past – a declining minority of the workforce

The unions are constantly renewing themselves. Many trade unions are in fact growing as they reach out to new groups. For example, Unison signed up 160,000 new members last year – 27,000 of them aged under 30. Unions are also on the rise internationally as more of the world is industrialised and workers start to ﬁght for their rights.

Deindustrialisation and legal attacks have reduced the number in unions in the UK since the 1970s. But with nearly seven million members (National Statistics), trade unions are still the largest voluntary organisations in the country.

And another estimated 3.3 million non-union workers are covered by collective agreements negotiated by a union.

MYTH: Unions are a drag on the economy

Government-commissioned research shows that unions bring an identiﬁable range of beneﬁts to the economy, and the taxpayer, worth up to £1.1 billion every year (‘Workplace representatives: a review of their facilities and facility time’, BERR). This is through their contribution to dispute resolution, reductions in workplace injuries and work-related illnesses, and improved take-up of training.

There are also productivity gains worth up to £12 billion (‘The Facts About Facility Time’, TUC) thanks to improved morale and employee engagement, among other factors.

Even the International Monetary Fund has published research (‘Inequality, Leverage and Crises’, IMF) suggesting that union bargaining helps maintain economic stability, by keeping a lid on inequalities and putting a brake on runaway expansions of household debt.

Nobel Prize winning economist Paul Krugman says: ‘If we want a society of broadly shared prosperity … we need to restore the bargaining power that labour has lost over the last 30 years, so that ordinary workers as well as superstars have the power to bargain for good wages.’

MYTH: Unions only care about the public sector, where most of their members work

The public sector’s conditions are better because unions have fought to maintain standards in the face of a race to the bottom. Union members’ hourly earnings are around 17 per cent higher than those of non-union members.

Unions face enormous challenges recruiting and organising in the private sector because of the nature of much employment. But millions of private sector workers are in unions – and millions more who are not in a union would like to join one. Unions want to level up, not race to the bottom.

According to the British Workplace Representation and Participation Survey, 46 per cent of employees in non-unionised workplaces say they would become members if unions were enabled to recruit and organise there. That alone would easily take total union membership above 50 per cent nationally.

In fact, unions have been working continually to address inequalities and secure greater participation and representation of women, black and ethnic minorities, disabled and young people ever since the social movements of the 1970s transformed understandings of inequality and work.

Unison, for example, has over a million women members – more than two thirds of the union. Women’s representation is growing across the unions, and many now actively encourage women to get involved and become reps.

It’s taken time and struggle, and there’s still a lot to be done, but unions score higher than most institutions on diversity and equalities – including not just businesses but also political parties. Young people today are far more likely to join a union than a political party.

The very role of a trade union is to provide democratic representation of its members in the workplace. The right to form and join trade unions is generally considered to be a fundamental part of any democratic society, and is speciﬁcally mentioned in the UN’s Universal Declaration of Human Rights (article 23).

Unions spread a culture of democracy. Research suggests high levels of union membership are linked to democratic participation more generally, such as voting in elections and campaigning in the community (‘The Everyday Democracy Index’, Demos).

Union leaders are elected democratically by a ballot of every member. Policy is made through the unions’ democratic structures, such as annual delegate conferences. As with any democratic institution there are ﬂaws, and improvements must be fought for, but in few organisations are the leaders as accountable as they are in the unions.

Trade unions’ portrayal in the media could make you think that they are universally despised. But surveys show that this is far from the case.

Even at the height of the attack on the unions, when MORI opinion polls found a majority of people agreeing that unions were ‘run by militants’, 73 per cent still agreed that unions are essential to protect workers’ interests’. Today 76 per cent say they are essential.

A ComRes opinion poll at the time of the smaller pensions strikes in June this year found that a majority of the public thought ‘public sector workers are right to take strike action’. With up to three million set to strike on 30 November, these arguments are ones we can win.

If you want to see more articles like this, please support us by becoming a Friend of Red Pepper. 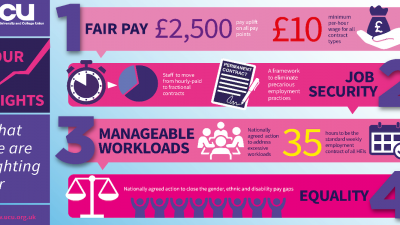 Solidarity with striking lecturers is the only way students win

University workers are right to be angry. Students should actively support their strike, argues Thys Millan 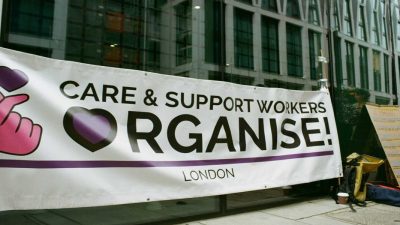