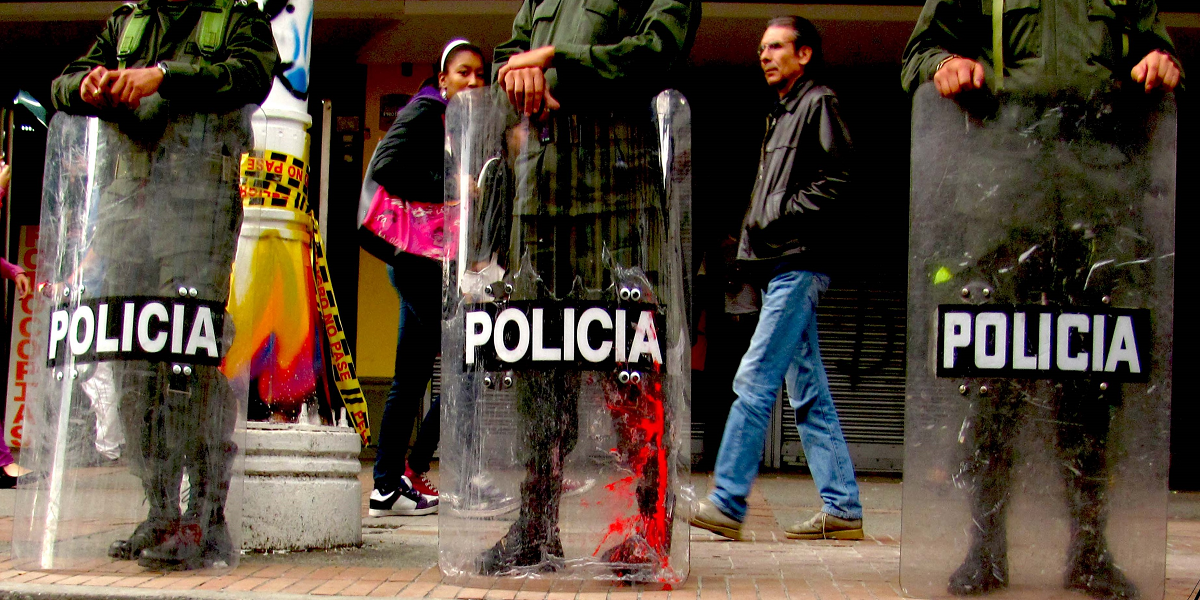 By day in Siloe, a barrio in the south of Cali, the sirens are constant. By night, the cries of people can be heard over shots of tear gas, rifles and pistols. The police patrol the streets and helicopters hover over marches below. Photos and videos ripple out on social media, adding to almost endless accusations of police violence. This portrait of a new normal in Cali could be of almost any other place in Colombia; a country where, until a few years ago, dialogue was the purported mechanism for resolving dispute.

As of 19 May, Colombia marks a third week of mass social uprisings that show no real signs of slowing down. With Colombia’s main cities militarised since 1 May and over forty people confirmed killed at the hands of police, the situation is one of intense humanitarian crisis.

The underlying conditions for the crisis, however, are not new. 54.2 per cent of Colombians live with food insecurity while a quarter of Colombian households have been forced to reduce their daily intake from three to two meals a day as a result of the pandemic. An additional 10 per cent of households have to get by on no more than one meal a day. It is in this context that regressive reforms, proposed by President Iván Duque in mid-April, sought to remove tax exemptions for basic staples and goods such as rice, medicine and utilities.

The proposals have been widely perceived as a direct attack on Colombia’s poor and working class. Social movements and diverse sectors of civil society responded by calling a national strike for 28 April. Since then, hundreds of thousands of students, peasants and workers as well as afro-descendent and indigenous peoples have taken to the streets in what has been described as the most diverse and far-reaching ‘indefinite national strike’ in the country’s recent history. 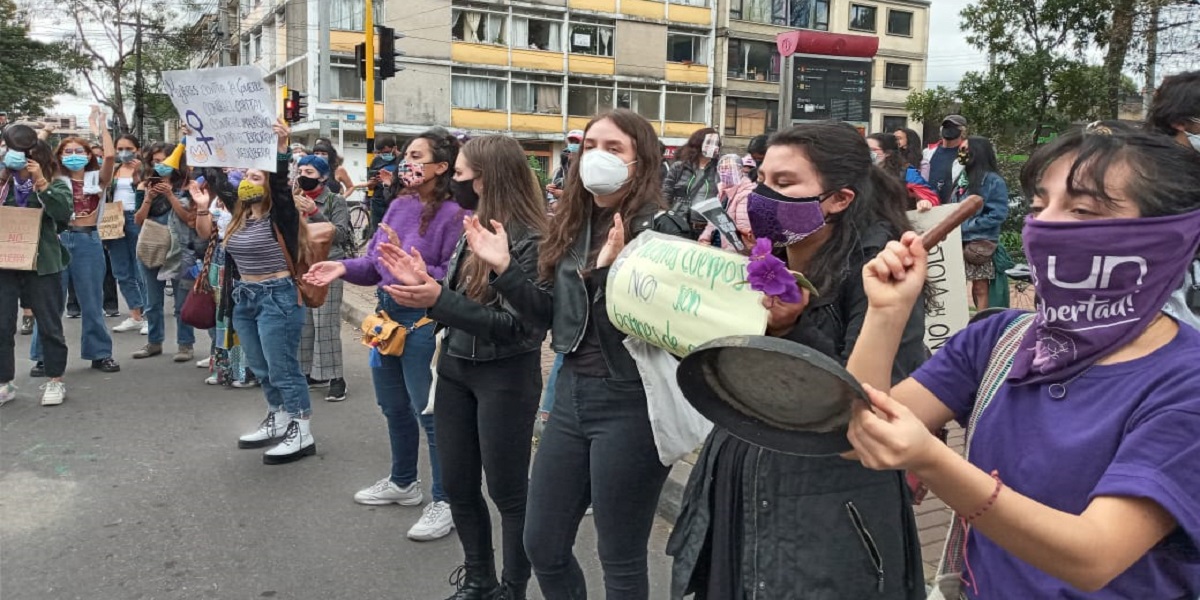 Women at a sit-in against police violence. Credit: Lorena Maria

President Duque’s response to Colombians exercising their right to protest has been to unleash the full force of the state. The Mobile Anti-Disturbance Squadron, or ESMAD, were deployed within the first few hours of the strike and instantly attacked protestors, fired into crowds and broke up peaceful demonstrations.

ESMAD, which received training from the British government between 2018 and 2020, could be described as a kind of armed riot police on steroids. Although their mandate is to only use non-lethal weapons in crowd control, in practice, ESMAD is just as deadly as the military police that deals with insurgencies and paramilitaries. Alongside the regressive tax reforms, Senator Wilson Arias also revealed on 6 May that the government’s economic plans featured increased funding for ESMAD to the tune of £2,721,300.

Temblores, a Bogota based NGO, has been publishing a rapidly mounting count of abuses that, taken together, tell a story of crimes against humanity. Up to 21 May, figures reveal at least 2,905 cases of police violence have been registered including 855 cases of physical violence; 39 cases of eye injuries; 21 cases of sexual violence; three cases of gender-based violence and 500 people disappeared. Added to this are the 43 people so far confirmed killed at the hands of state forces.

A spokesperson for the human rights network Defender la libertad es un asunto de todos, warned that ‘nobody is safe from an aggression. In Colombia today, all of us who are out on the streets participating in the mobilisations are targets of the police’. The network has documented multiple attacks against journalists, human rights observers and medical personnel including cases of interrupted work, destroyed equipment, torture and death threats.

Rather than breaking the movement, the systematic and coordinated use of violence under orders of President Duque has only served to draw greater numbers of people into the streets. For Melissa Salazar Calle, a 23-year-old student at the University of Antioquia and member of the journalist collective, Le Cuento, this is one of many characteristics that makes the current mobilisations stand out. Calle commented: ‘In previous strikes it [has been] the first national march [that] has always been the historic and largest one. In this strike the marches keep getting bigger, more people get involved. I’ve never seen anything like this before.’

Into the streets indefinitely 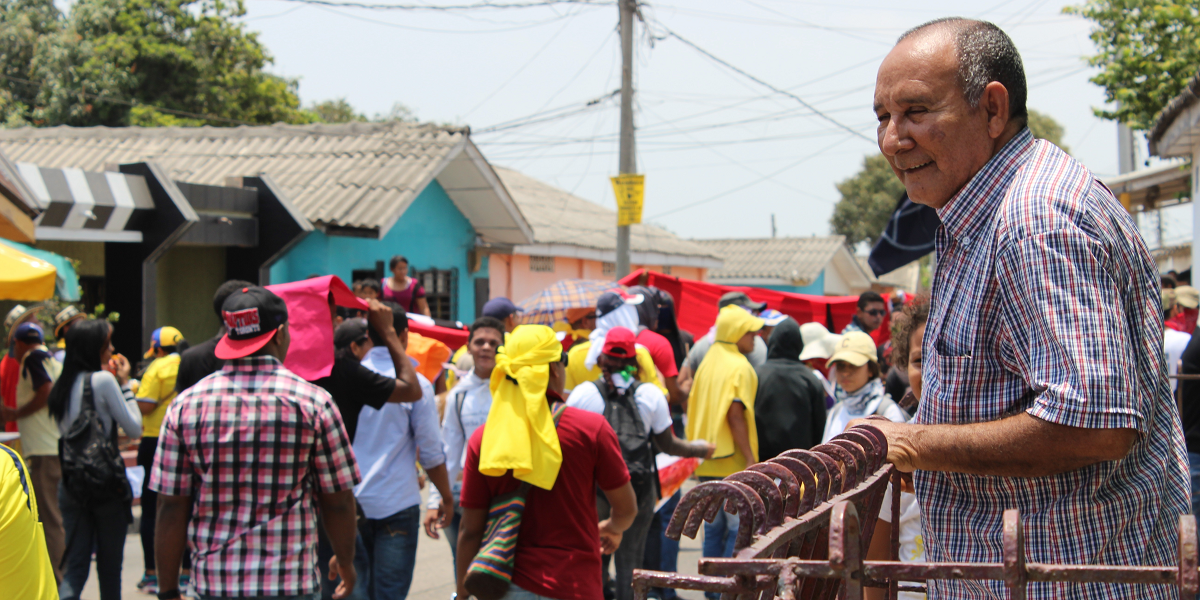 An elderly man looks on at a march in Barranquilla. Credit: Maria Acuña

Those whose lives have been taken by the police and military since 28 April are numerous and deserve to be remembered. Amongst them are Diego Perdomo, 20, from Neiva; Santiago Andres Murillo, 17, from Ibagué; and Lucas Villa from Pereira. From Cali alone, the epicentre of police violence, the dead include Yinson Angulo, 23; Nicolas Guerrero, 22; Kevin Antoni Agudelo Jiménez, 22; Maria Jovita Osorio; Harold Antoni Rodríguez Mellizo and José Emilson Ambuila.

Furthermore, according to the feminist collective Articulación Feminista 8M Popayán and human rights organisations in the region, a 17 year-old girl, took her own life on 13 May having been subjected to ‘instances of physical and sexual violence committed by the national police.’ Police deny any wrongdoing although the officers implicated have since been removed from service.

50-year-old Ruth Solano from Barranquilla told Red Pepper that she won’t be silenced despite the risks. ‘We are going into the streets indefinitely. The time has come to tear this exploitative government down, this regime of death, and for us, as young people and as citizens, to take control and create change for our country.’

In the face of such sentiment, neither the government’s subsequent U-turn on the controversial tax proposals nor the resignation of Alberto Carrasquilla, the minister responsible for them, could hope to stop the movement. Behind the indefinite national strike lurks a far deeper discontent and a collective trauma that is, at the same time, fresh and decades old. The killings, arbitrary detentions and disappearances have awakened a collective memory of a tumultuous and painful history.

It is in this context that the international community must take a stand and amplify Colombians’ calls for the demilitarisation of the country and disbandment of ESMAD as a pre-condition for any negotiations with the government. On the table are a set of seven basic demands around access to education, health and a living wage as well as food sovereignty, the upholding of agreements made under the Peace Agreement and an end to gender discrimination and further privatisations. The independence of certain powers continues to be central to protestors’ demands. Currently the state’s key institutions, including many of its legislative, judicial and executive functions are under control of the current government. As such, they lack the independence to investigate and hold the government to account.

The main sense emanating from Colombia’s largely abandoned youth, afro-descendent, indigenous and worker communities is of a ‘complete rejection of this idea of death politics’ that, according to 22 year-old Le Cuento journalist, Daniel Osorio, currently defines Colombia. Ruth Solano speaks for millions of Colombians when she says ‘we are lifting our voices up to the international community to make this public denunciation so that all eyes can be on Colombia. Don’t abandon us because they’re killing us and we need an international outcry for life, for peace and for the dignity of our people.’

Philippa de Boissière is a freelance journalist and writer who mainly writes on climate justice, social movements and extractivism from the Andes. María Mónica Acuña is a social communicator and journalist based in Colombia. She holds a master’s degree in journalism.