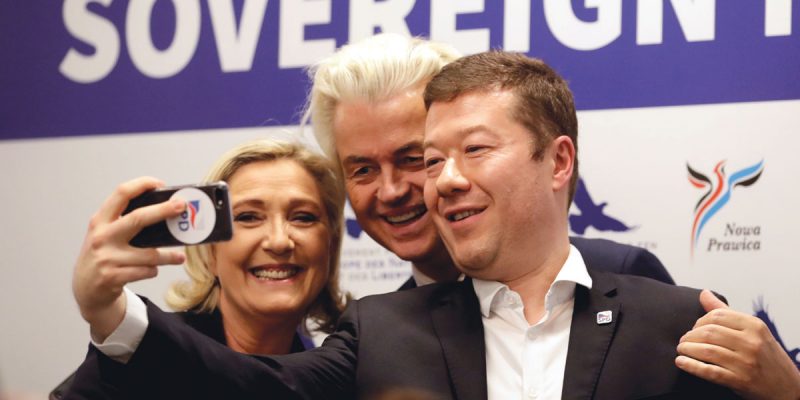 In December 2018, the hard-right United Kingdom Independence Party (UKIP) tweeted: ‘Make no mistakes, the EU wants to control your thoughts through your speech to spread its Postmodernist Neo-Marxist ideology.’ The turn from its more familiar anti-EU fare to tweeting scarcely passable academic jargon may appear puzzling on the face of it. But the particular terminology is key to a reinvigorated and broad ideology, which academic Cas Mudde delineates in The Far Right Today.

While the far right have always attacked racial and ethnic ‘others’, many of its narratives now focus on wider ‘elites’ – with deliberately muddy definitions to encompass as many political enemies as possible. The extreme right still maintains an obsession with race: Mudde points out that ‘a special role in “white genocide” conspiracy theories is almost always reserved for “the Jews”, who are alleged to mastermind all such plots in order to submit the white race to their power’. But a narrative around corruption by subterfuge and a culture supposedly under attack mean an increasing use of claims of ‘cultural Marxism’ and ‘postmodernist’ ideas infiltrating the mainstream via political elites. UKIP’s claim, therefore, is that the EU is attempting a covert stranglehold over the lives of millions: a long-winded attempt to assert the old trope ‘political correctness gone mad’.

‘Cultural Marxism’ is also a well-documented antisemitic dog whistle, originally levelled at the Frankfurt School and now experiencing a resurgence, initially through the online far right. After the massacre at the socialist summer camp at Utøya in 2011, Norwegian neo-Nazi Anders Breivik’s ‘manifesto’ was discovered, and amid much barely comprehensible raving, repeatedly mentioned the term. The concept is not limited to the fringes, however: in March 2019, for example, Conservative MP Suella Braverman used the term twice in a speech, while attacking the EU, then defended doing so during questions afterwards, despite journalists specifically highlighting Breivik’s use of the term.

The far right and its ideas have become increasingly mainstream over the past decade, as the electoral successes of Donald Trump, Jair Bolsonaro, Matteo Salvini, Narendra Modi, Norbert Hofer, Marine Le Pen and others illustrate only too well. Even where it has failed to achieve electoral breakthroughs, its participation in elections has been key to its growing visibility – and normalisation.

UKIP never managed to get a single MP elected through the ballot box (its former leader Nigel Farage failed seven times). The party’s sole representative in parliament crossed the floor from the Conservative Party then lost his seat at the next election. But its participation and vote share in elections – particularly in low-turnout European elections – led to the media and politicians giving them more airtime and their political arguments more credence than the traditional far-right emphasis on street demonstrations and political violence would have garnered.

The doesn’t mean that the far right has abandoned such activities, as Cas Mudde makes clear. Indeed, far-right demonstrations and violence have become more common with the ‘refugee crisis’ in Europe in 2015, and the election of Donald Trump in 2016. After the 9/11 attacks in 2001, police departments and intelligence services became ‘blind in the right eye, worsened by the obsessive focus on jihadi terrorism’, in Mudde’s words, and are only now coming to terms with the increasing incidence of far-right violence and its association with far-right parties and ideas.

The rise of the far right is often attributed simply to economic anxiety. Commentators in the US depict Trump supporters as poor ‘rednecks’, while Democrat voters are depicted as elite, wealthy and out of touch. A similar story is told in the UK and many other countries. This ignores the fact that those who back Bernie Sanders or Jeremy Corbyn are generally younger, with insecure jobs and few to no assets, and disproportionately black or other minorities.

Mudde makes the point that, in respect of the rise of the far right, economic anxiety must be considered alongside cultural backlash. Supporters of the far right believe that either they or their country are absolutely or relatively poor, and the reason for that deprivation is immigration. Nativism in political and public debates intrinsically links migration to the economy, and the far right continues to claim ‘immigrants are taking your jobs’, an argument that has been a mainstay of British tabloid newspapers for decades and is a central plank of all far-right parties.

An under-remarked aspect of the far right is its reliance on gender. Islamophobic arguments often use women, and purported concern for the rights of women and girls, when attacking the local and national Muslim population. ‘Women and girls are often portrayed as vulnerable, threatened by “aliens” (domestic or foreign), and dependent upon the protection of “their” (masculine) men,’ Mudde writes.

It is only within the context of Islamophobia that far-right groups defend gender equality and women’s rights, juxtaposing an egalitarian ‘west’ against a misogynist ‘Islam’. Within this feigned concern is an aggressive possessiveness: the women mentioned are ‘our women’. This is not a remotely feminist argument even on its own terms, but a racist and libidinous mindset that seeks to assert ownership over one half of the population, while constantly advocating arguments against ‘race-mixing’ and continuing to assert the ‘white genocide’ trope.

It is also no coincidence that the vast majority of far right leaders are male, Mudde notes, because ‘a kind of martial camaraderie and an image and practice of violence attract a specific subset of men, while at the same time repelling most women’. The far right engages in both benevolent and hostile sexism: idolising some aspects of femininity, while decrying others, particularly women’s rights and agency. Toxic masculinity emboldens many on the far right, encouraging individuals and groups to show their dominance through aggression and violence. But the assertion of a ‘crisis’ in masculinity is also often used as an excuse for political violence and aggression.

In the same way that ‘political correctness gone mad’ is used as an excuse for racism, the idea that feminism has gone ‘too far’ is wheeled out as a root cause for the behaviour of many on the far right. Women on the far right, particularly the alt right (Tomi Lauren, Lauren Southern, Laura Loomer), explicitly reject feminism while arguing that the left seeks to emasculate men. This accompanies a victimhood narrative among men, particularly that too many men are ‘involuntarily celibate’ and that they are denied ‘their women’, in a manner that dovetails with the false narrative that migrants are taking ‘their jobs’.

Ultimately, Mudde argues, there is no one simple way to fight the far right. Neither complete exclusion nor full inclusion of either the groups or ideas works. Far-right ideas can’t just be ignored but they become more widespread and influential when co-opted by mainstream parties. Too often, in seeking to address the rise of the far right, parties have followed its agenda. In doing so, they have emboldened extremists and allowed them to dictate the direction of the national political narrative.

The far right thrives on talking up problems and imagined threats. Only putting forward a positive argument for a different future will combat the political extreme locally and nationally.

Dawn Foster is a broadcaster and staff columnist for Jacobin magazine

The Far Right Today is published by Polity