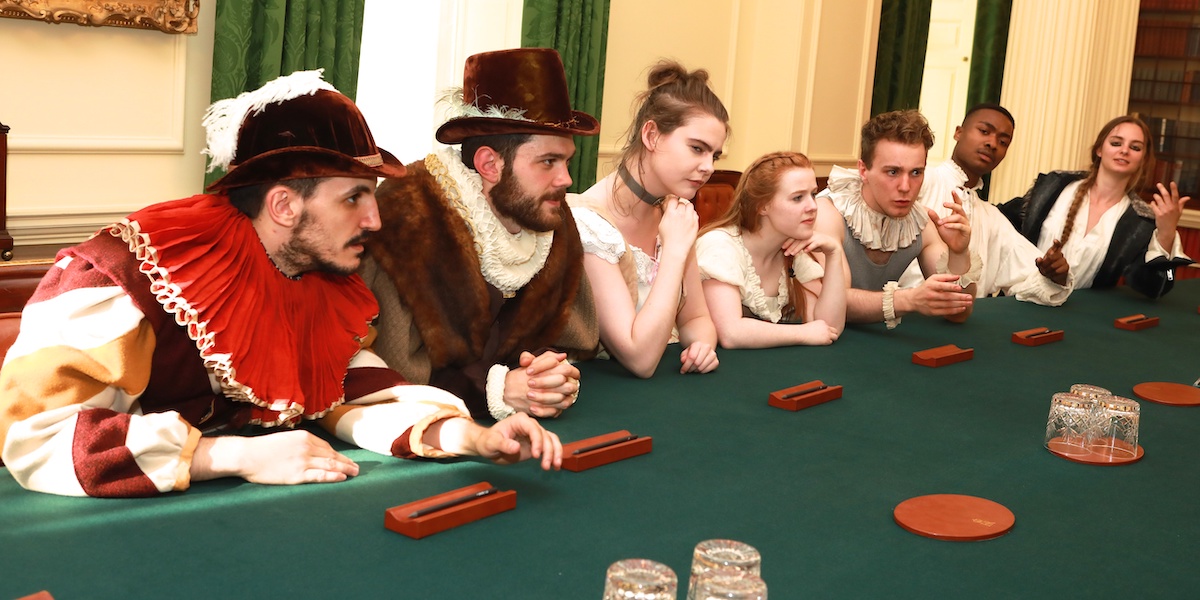 On 22 September 2019, British writer Phoebe Waller-Bridge won four Emmys for her show Fleabag. The coverage was jubilant: a ‘triumph for scrappy British underdogs’, proclaimed Michael Horgan in the Telegraph. A tweet from user @danalani juxtaposed the image of Waller-Bridge – white teeth shining like the sequins on her gown – with an early three-star review of her Edinburgh Fringe staging of Fleabag, with the caption ‘Don’t let the fuckers get you down.’ It gained over 80,000 retweets. A photo of Waller-Bridge leaning back in a deck chair, wearing a £6,300 ball gown, surrounded by her awards, one hand holding a cigarette to her lips, the other a coupe glass, went viral.

The narrative had been formed calcified: from nothing to something, Waller-Bridge was a plucky upstart who had overturned the establishment with her singular genius. It seemed strange, then, to reflect that she is landed gentry, descended from baronets on both sides. Her secondary school charges £16,000 a year. Her father, and his offshore bank accounts, were named in the ‘Paradise Papers’ leak. She went to RADA and her award-winning show was, ultimately, the story of a white woman in north London who can afford a flat all to herself.

Natalie Olah’s Steal as Much as You Can: How to win the culture wars in an age of austerity proposes that this isn’t strange at all. Maybe, far from a quirk, this is the way the arts, with the aid of a complicit media landscape, have been designed. ‘A new era of models, musicians, actors, writers, fashion designers and artists who were blue-blooded and proud’ is Olah’s summary of the 2010s.

The first chapter, titled ‘Education, Education, Education’, lays out the book’s framework. It concerns the ramifications of the education policies of the Blair government and its continuation of Thatcherite economic restructuring. Though Blair’s central tenet of education for all opened up access for poorer students, Olah argues that far from a ‘straightforwardly altruistic’ belief in lifelong learning, this was instead used to prepare young people for the financial markets, service roles and computer-based work that make up much of 21st- century Britain.

Blair’s emphasis on university for all created an environment in which the grade, exam and league table became the supreme arbiters of not just ability but moral worth, leading to schools ‘focusing more on hammering home the assessment criteria than ensuring their pupils developed a thorough and meaningful understanding of a given subject’. Olah also traces how ‘practical education’ – apprenticeships and vocational subjects – effectively vanished, along with the skilled, well-paid industry jobs they provided a route into. ‘Working- class people were perceived to face one of two choices: succeed in education and the professional services or fail,’ she summarises.

I can’t help wishing there was more discussion of the decline of these apprenticeships. Of course, the skilled work they once served has mostly dried up, but their waning influence is also indelibly linked to the rising cost of accommodation and low wages in exchange for menial tasks.

I also wonder if this entrenches the idea that further education and practical smarts are somehow opposed. This line of thinking has been heavily propagated, but if we look back to the 1919 Report on Adult Education, mechanics’ institutes and the foundation of public libraries, we find that demands for continuous learning and the history of the labour movement are inextricable. There’s no mention in the book of the decline in adult education due to funding cuts to councils and organisations such as the Open University, which once meant that learning wasn’t the preserve of 18-year-olds.

One of the most compelling chapters in the book is on tastefulness. Using a Bourdieuan analysis of a middle- class British habitus that seeks to ‘censure and deride the experiences of low earners’, Olah is never better than when she slices to the bone of the liberal bohemian who ‘is often the worst culprit for deriding the “crass” efforts of a group forced, through historic oppression and struggle, to more frequently and explicitly participate in the capitalist system’.

Earlier, she uses the example of EastEnders actor Danniella Westbrook’s endless pillorying in the tabloids due to her ‘chavvy’ all-Burberry outfit – a symbol of attainment warped into a sign of utter failure – as an example of Blairite-era society’s do-or-die attitude towards cultural assimilation. Olah sums it up perfectly: ‘The middle and upper classes are free to mine working-class culture for whatever purposes they like… while their working-class peers are ordered to conform to a narrow set of good-taste principles defined by the establishment in order to be accepted and approved.’

The section on literary tastefulness is especially remarkable – an industry so myopic that it prides itself as being elevated from the capitalist, consumerist landscape it is utterly beholden to, viewing itself instead as an ultimate arbiter of morality and good that is nevertheless ‘depoliticised and stripped of any militancy’. Olah’s description of how as a result of the ‘twee pictures painted by today’s publishing enthusiasts – “curled up on the sofa with the latest Rachel Cusk!” – literature has become increasingly reframed as a lifestyle choice and pastime of the wealthy’ is so accurate that it has started to pop- up reflexively whenever I view the Twitter and Instagram accounts of every publishing-adjacent peer.

It’s for this reason that Olah examines two books under the microscope of ‘bad taste’ – Otessa Moshfegh’s My Year of Rest and Relaxation and Bret Easton Ellis’s American Psycho. She praises the former for not ‘appealing to the tepid tastes of today’s reading class’, which seems an odd accolade considering it was published by Penguin, reviewed positively and has been optioned by a Hollywood production studio.

Olah’s defence of American Psycho as an ‘important’ work of satire against those who judge it to be misogynistic and unnecessarily lurid is more complex. Arguing that ‘mainstream cultural output that shocks, scares, challenges and surprises us also forces us to … look inward and reflect on the emotional responses it creates’, the idea is that what can otherwise be seen as gratuitous is actually a deconstruction of middle-class boundary setting.

But while this can certainly be true – and it is far from a new idea – Olah leaves us without an arbiter of what is or isn’t ‘gratuitous, but a necessary means for challenging our most deeply held assumptions’. Is something that clearly seeks to transgress all boundaries in order to shock, if it retains a thin veneer of societal critique, worthy? (I’m thinking of something as infamous as A Serbian Film, whose director claimed it was a satire and a metaphor for ‘the consequences of postwar society’.) While it is undoubtedly true that taste often functions as a barrier to anything that does not conform to agreed- upon bourgeois conventions, I wanted to know what constitutes a meaningful circumvention of those, and who decides this.

Another recurring thought while reading Steal as Much as You Can is of Labour’s crushing election defeat. It is clear that age and education are now bigger determinants of how people vote than class. These influences intersect in the ways Olah describes – young people from working-class and lower-middle- class backgrounds are obviously most likely to have felt the effects of austerity and career precarity, and the further education encouraged by Blair did, as she outlines, put this group ‘on a fact-finding mission to understand the forces that had so far acted against it’.

This review is from our Spring 2020 issue. Subscribe here