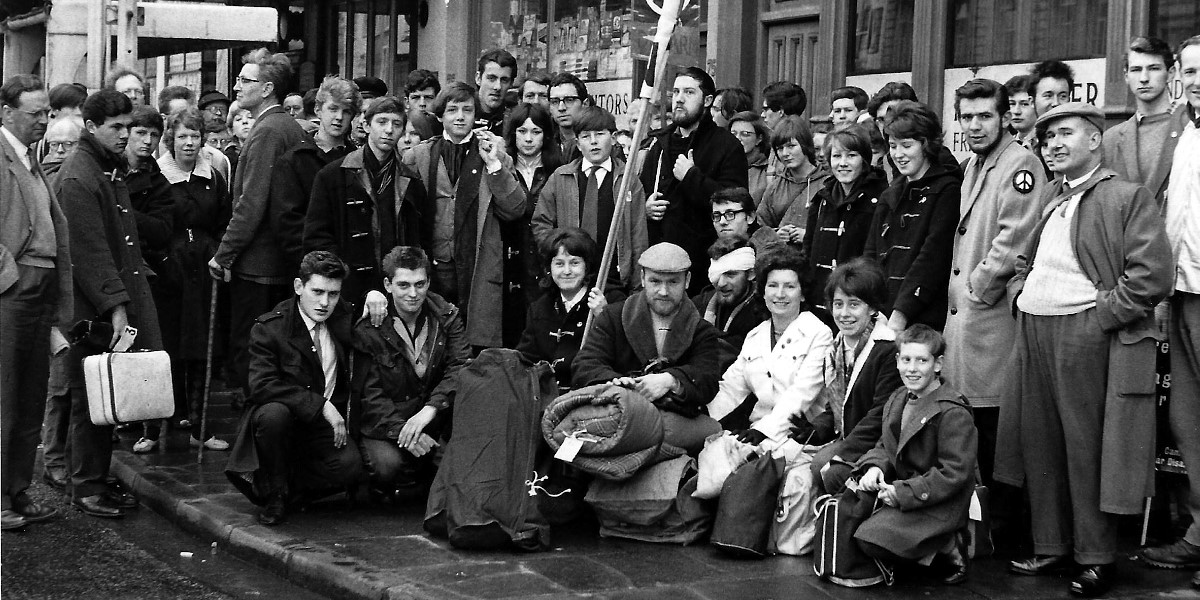 Angela Carter’s time in Bristol (1961-69) and Bath (1973-75) provides the frame to explore the ‘provincial bohemia’ of the period and its influence on her work. This book makes a very real contribution to a Londoncentric literature on 1960s/70s counterculture, broadening our understanding of the era.

Acknowledging that the very term, counterculture, is ‘uncertain and contested’, Hunt provides an expansive definition that includes the spiritual, the political, direct democracy, hedonism, environmentalism, even styles of dress. He then unrolls a comprehensive and evocative array of events, personalities, venues, networks and actions. Bringing a welcome socialist critique, the text ranges across the literary, musical and political scenes of countercultural Clifton in Bristol and, to a lesser extent, the Walcot area of Bath.

This context brings new emphasis to the importance of locality and counterculture in Carter’s life and work. We learn of her engagement with the folk revival, CND, alternative theatre and anarchist debates. Living in Royal York Crescent in the heart of Clifton, Hay Hill in Bath, she moved through the shabby elegant streets

of the two cities interacting with the close-knit and interwoven networks that constituted west country counterculture. Hunt explores most effectively how, in the creative act of writing the ‘Bristol trilogy’ (novels published 1966-71) she found expression for her ambivalent enjoyment of the bohemian characters and ‘festal feel’ of the alternative scene in all its ‘foibles, cruelties, guile and gusto’.

Many further aspects of the counterculture are explored – for example, in a chapter on ‘Dissident voices’, the Dwarf Party, student politics and a marvellous range of alternative political newsletters. A good account is given of the national importance of Bristol Women’s Group (founded in 1969), Sistershow (a feminist agitprop cabaret), Bristol Women’s Centre and the range of feminist and lesbian newsletters and key figures involved. Bath Arts Workshop, Comtek and the festivals associated with them in Walcotare given fair attention, as are many facets of the music scene. The value of recording and celebrating these things goes without saying, especially in a ‘history from below’ when the generation that remembers is dying out.

However, while Carter described herself as ‘in a slapdash kind of way, an anarcho-Marxist’, she was not actually involved with those ‘dissident voices’ and her connection with other events is often tenuous. So structural problems and awkward moments do arise in aligning her specific experience with a wider account of the counterculture.

The role of women could have been further explored. While they certainly played a part in both the cultural and left-wing political scenes, much of the feminist activity recounted here was a reaction against the marginalisation that women often experienced in those contexts. A majority of the interviewees are men. Tellingly, Bob Gale, listing the membership of the Grot Club, names six men plus could not be recalled’. This kind of sidelining was not untypical (and certainly something I experienced at the time) but is not commented on and, rather strangely, given its enduring and significant impact, the feminist movement makes no appearance in the final chapter, where the overall efficacy of the counterculture is carefully considered.

Despite this lacuna, it is excellent to see counterculture placed in a wider socio-political context and approached from a socialist perspective, as it is throughout the book. High employment, affordable housing and a booming economy allowed countercultural activities to flourish in the interstices of capitalism, which the gentrification of Clifton and Walcot and the depredations of Thatcherism brought to an end.

Hunt opines that a fragmented, often individualistic resistance ‘lacked … the wider solidarity to achieve meaningful change … reducing its revolutionary potential’. In this he shares Carter’s ambivalence and distancing from the scene. Yet, perhaps in a similar spirit to hers, he also salutes ‘the 60s utopian counterculture that dared to experiment and explore the possibilities for thoroughgoing social change’ and concludes that ‘in a sense there is no such thing as a failed utopia’.

This article originally appeared in issue #229 ‘No Return to Normal’. Subscribe today to support independent media and get your issue hot off the press!