From creating to ‘taking up’ space, Molly Fleming reports on the ongoing efforts to sustain radical queer traditions 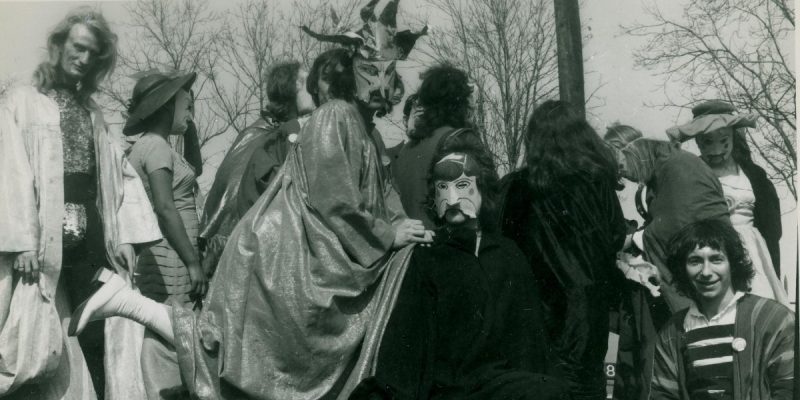 On 13 October 1970, 19 people gathered in a basement room of the London School of Economics for the first meeting of the Gay Liberation Front. The GLF would grow to become a leading voice in the fight for gay equality and a host of associated rights, paving the way for a radical queer movement that outlived the group itself. GLF’s goal was not acceptance into a straight world, however, but freedom from the confines of heteronormativity.

In the 1970s, GLF organised sit-ins in pubs that refused to serve queer people. It staged a ‘kiss-in’ at the conservative Christian Festival of Light and occupied a bank that provided services to aversion therapists. Beyond disrupting straight spaces, GLF members were also creating their own. Radical feminist drag queens set up communes in Brixton and Notting Hill, creating safe spaces for gender expression and exploring different models of cohabitation and polyamory. Radical queer spaces have been, and still are, crucial to our fight.

As public spaces become less hostile and we gain representation in the mainstream, our relationship with our own spaces has become complicated. In its early years, the UK Gay Pride rally once decamped from London to Yorkshire in solidarity with a queer community being harassed by police. Now, police march at Pride alongside prison officers and the Home Office. While straight people now pay to see Ru Paul’s Drag Race on tour, for many being visibly queer in public can still feel like taking a risk. We need to ask: who do queer spaces serve? And how might we define them?

Lucas LaRochelle explores these questions through Queering the Map – a virtual, global archive allowing anyone to anonymously document queer experiences of physical space. Despite two ‘intense’ years documenting it, Lucas notes that ‘queer space’ is still near impossible to define. ‘There are endless possible definitions that are also contradictory. I would move towards something that is transient – queer space is produced through action.’

For many of us, our first experience of recognisably queer space is queer nightlife. Moving through sweaty basements and neon-lit bars, we’re simultaneously seen and anonymous, loudly taking up space so often not afforded to us. But while these spaces foster joy and pride, they can also make us vulnerable.

‘My experience is that most people who fall on their arse in our community do so because they only have pubs to go to,’ says Carla Ecola, founder of the first LGBTQ+ homeless shelter, the Outside Project. ‘We’d get a lot more done and our community would be a lot safer if we organised in community centres rather than bars.’

LGBTQ+ youth make up a quarter of the homeless population and are more likely to suffer from addiction. Lack of welfare for the community is a longstanding issue. ‘Throughout history, having social space based on identity has been really important [for councils] but our community has always been left off that list intentionally,’ Carla explains. ‘We are also quite fearful of stepping through the door of what seems “institutional” when it comes to community centres – that goes back to Section 28 and institutions not being safe for us. So we try to take up space in clubs and pubs.

To ‘take up space’ is the crux of the liberation that GLF fought for all those years ago. But how communal is that joy in practice today? Those who don’t drink are often alienated from queer nightlife, where most venues lack accessibility requirements and the clientele are overwhelmingly white, cisgender, gay men.

Covid-19 lockdowns forced formerly physical queer spaces into the digital sphere, but for some LGBTQ+ people, both a sense of isolation and the importance of online spaces predates the pandemic. Lucas explains: ‘Because I grew up in a rural place, I didn’t have any access to queer people. So seeing trans and gender nonconforming people online on Twitter and Tumblr instilled in me a sense of connection, the possibility of a community future and a community present. Just seeing that there were other people like me on the internet was the most magical and life-sustaining experience.

Moving through sweaty basements and neon-lit bars, we’re simultaneously seen and anonymous, loudly taking up space so often not afforded to us

In contrast, Lucas’s first experience of queer physical space, Toronto Pride, could not have been more alienating. ‘Being a young person seeing almost exclusively white, cis, masculine men – out of all the people who were meant to be my community – was unbelievably alienating. I’ve never been to Pride since.’

This sense of alienation is shared by writer and campaigner Alex Leon, who first found a sense of community at UK Black Pride: ‘I fell apart crying because I thought: I’ve been denied this feeling of pure belonging where I am around people who look like me and love like me.’ While Alex’s experience highlights the desperate need for more QTIPOC-only (queer, trans and intersex people of colour) spaces, anti-racist queer spaces are also vital in a community where racism is rife.

Alienation can be felt from multiple directions, as the DJs and activists of Queer House Party have learned. Set up in the first week of lockdown, their Friday-night live-streamed drag and DJ sets have attracted up to 2,000 people joining remotely. Resident DJ Passer (aka Nik) says it’s opened their eyes to the lack of accessibility in physical queer spaces. QHP soon hired BSL interpreters and are working on audio descriptors. QHP has also offered respite to those forced back in the closet by relocation to family homes.

When ‘real life’ returns QHP vows to carry forward lessons learned during lockdown. ‘We decided to live stream every party going forward. You can’t call yourself a radical space if you don’t take accessibility into account,’ Nik explains. Still, Nik says, online space is no substitute for the real thing. ‘Queer spaces are inherently political because spaces are policed in various ways. QHP has made me realise what it means to be in a [physical] space where there are bodies and identities that aren’t readily accepted elsewhere.’

As we look to recover and understand a new normal, however, we must look again at our queer spaces with a critical and political eye attentive to privilege and gatekeeping in our community. Today, as in 1970, our struggle and our spaces are intrinsically linked.

Molly Fleming is a queer journalist and activist with Lesbians and Gays Support the Migrants. This article originally appeared in issue #229 ‘No Return to Normal’. Subscribe today to get your copy and support fearless, independent media.