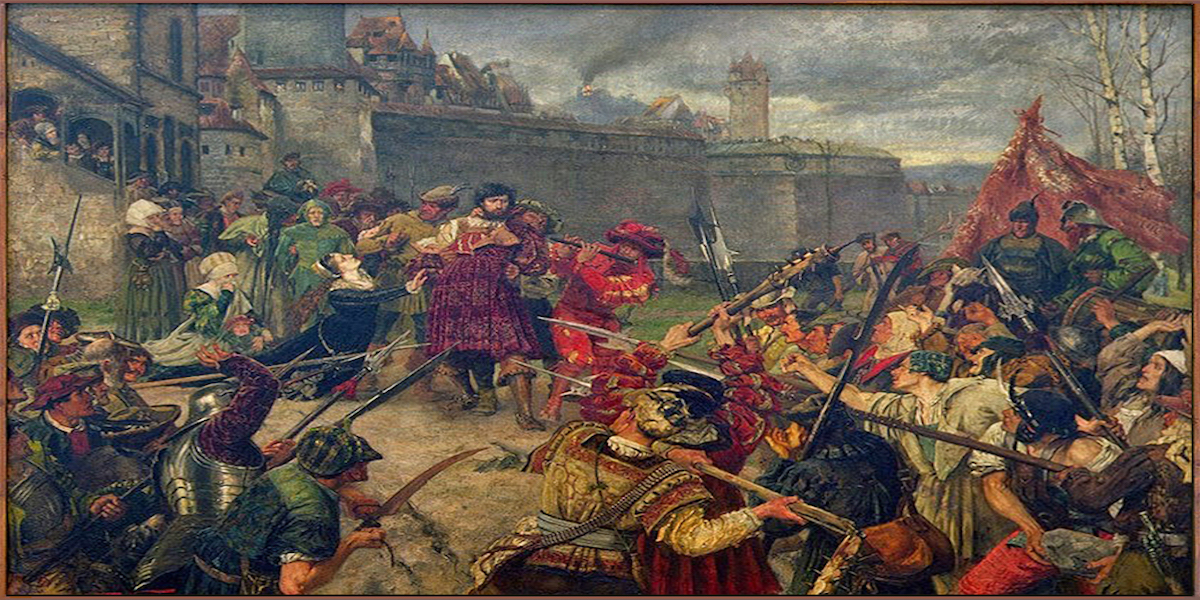 ‘The Murder of Count Helfenstein’ during the German Peasants’ Revolt (Credit: WikiCommons)

As the global economy reaches a standstill, discourse around Covid-19 has become flecked with the rhetoric of apocalypse. But unlike the universal, biblical reckoning of the popular imagination, this breakdown has exploded the claim that we are ‘all in it together’.

In an immediate sense, those with ample living space and gardens face very different scenarios to low-income key workers facing higher infection risks and little prospect of remaining furloughed safely at home. As international attention focuses again on racialised violence in the United States, death rates here in the UK are quietly unfolding along lines of class, ethnicity and locality. Adjusting for socioeconomic background, black people are reportedly almost twice as likely to die from Covid-19 than white people and, for many front-line communities, navigating precarity has long been a fundamental fact of existence.

In The Sovereign Individual (Touchstone, 1997), William Rees-Mogg and James Dale Davidson present processes of disruption and chaos as business opportunities for the burgeoning tech elite. Seen from this vantage, each crisis is a passing melodrama: ‘forecasts are doomed to make silly reading in the fullness of time… And the more dramatic the change they envision, the more embarrassingly wrong they tend to be. The world doesn’t end. The ozone doesn’t vanish. The coming Ice Age dissolves into global warming.’

Silicon Valley’s Peter Thiel, founder of Paypal and Palantir Technologies, cites it as the single most influential book he’s read. Alastair Campbell termed it “the most important book you have never heard of”, and it is no great leap to associate this philosophy with the new breed of Downing Street ‘luminaries’ led by the cyberpunk-reading, amateur epidemiologist Dominic Cummings.

Weeks before it became government policy, many pleaded for a national shutdown and enforced social distancing measures. The government, wary of perceived alarmism, showed a firm recalcitrance to these pleas. We now know thousands may have died as a result. When the threat seemed so blindingly obvious, why the delay?

Medieval and Early Modern Europe saw a blooming of proto-communistic movements intent on challenging the feudal power of monarchs and the church. Often in response to miserable conditions, the peasantry rebelled against their lords, proclaiming the apocalypse – awaiting Christ’s return to cast final judgement on the rife corruption and moral hypocrisy of the ruling class.

In fact, the fleeting utopia of groups like the Diggers, the Joachimites or Taborites usually ended with brutal campaigns of repression. Benjamin Noys notes: ‘the apocalypse that became real was often the apocalypse of repression. The repression in the wake of the Peasants’ War in Germany (1524-26) led to the deaths of over 100,000 peasants, and the eventual execution of its leader Thomas Müntzer who, under torture, proclaimed “Omnia sunt communia” (All things are to be held in common).’ Such reactions point to the palpable fear the ruling class developed, haunted by the possibility of the return of these existential threats.

As the pursuit of capital drew European states to actively pursue colonisation from the Early Modern Period onwards, they inflicted apocalyptic violences on indigenous peoples in Africa, Asia and the Americas. Christopher Columbus’ arrival alone catalysed a 95% population loss through violence and disease – described by Brazilian scholars Eduardo Viveiros de Castro and Deborah Danowski as ‘when the New World was hit by the Old one as if by a giant celestial body…’

Similarly, violences inflicted through chattel slavery reached a register so apocalyptic that, many years later, African-American jazz experimentalist Sun Ra asks us it’s after the end of the world, don’t you know that yet? The allegedly universal arrival of climate change, too, will function along colonial lines. In the near-future, countries in the global South like Bangladesh, Sudan, and Syria will be first to experience the climate chaos of rising seas, desertification and civil conflict.

The violences of the past ramify through the years, entrenching inequities. On the eve of our current plague, they manifested in scenarios like the acquisition of lithium reserves in Bolivia (necessary for the infrastructure of the Green Economy), which trades the prospect of climate change for a doomsday enacted upon indigenous people. And now, since its arrival in the UK, Emanuel Gomes, Belly Mujinga, and Melujean Ballesteros are among the workers that have lost their lives facing down intersections of Covid-19 inequalities.

History shows us that how, or if, we experience ‘the end of the world’ reflects our positions as either beneficiaries or victims of worldly expropriation. For multinationals like Amazon and Deliveroo, this crisis has vindicated some claims of The Sovereign Individual – with an acceleration of the shift towards online commerce, their platforms thrive at the expense of everything else. But rather than freeing the individual, as the book forecasts, such disruptions are merely increasing the power of corporations, further leveraging capital over labour.

It’s not surprising, then, that as Covid-19 tears down the world as we know it, the ruling class is slow to listen. They are buffered from its worst effects. Ignoring protestations that the end is nigh is a necessary condition of wielding violent power. They are not demonstrating their incompetence: they are acting with logics that reflect their own self-interest.

It is too soon to say whether or not government inaction will come back to bite the establishment, or if the stress-fractures exposed in the system will be once more glossed over post-crisis. For leftists – who have been proclaiming end times since Marx first put pen to paper – this moment might indeed prove another example of capitalism’s adaptability, and embarrass proclaimers of the exceptional. Worse, it could trigger the kind of regression Jodi Dean terms ‘neofeudalism’ – a return to the precarious dependency and desperate conditions that spurred peasant uprisings hundreds of years ago.

But beyond this world’s end, a dystopia or utopia will not emerge fully formed – each must be actively created, either by the beneficiaries of the current system or by its survivors. 2008 ultimately failed to usher in the change we needed: the left must be ready this time, prepared to seize the day and start building a new world.