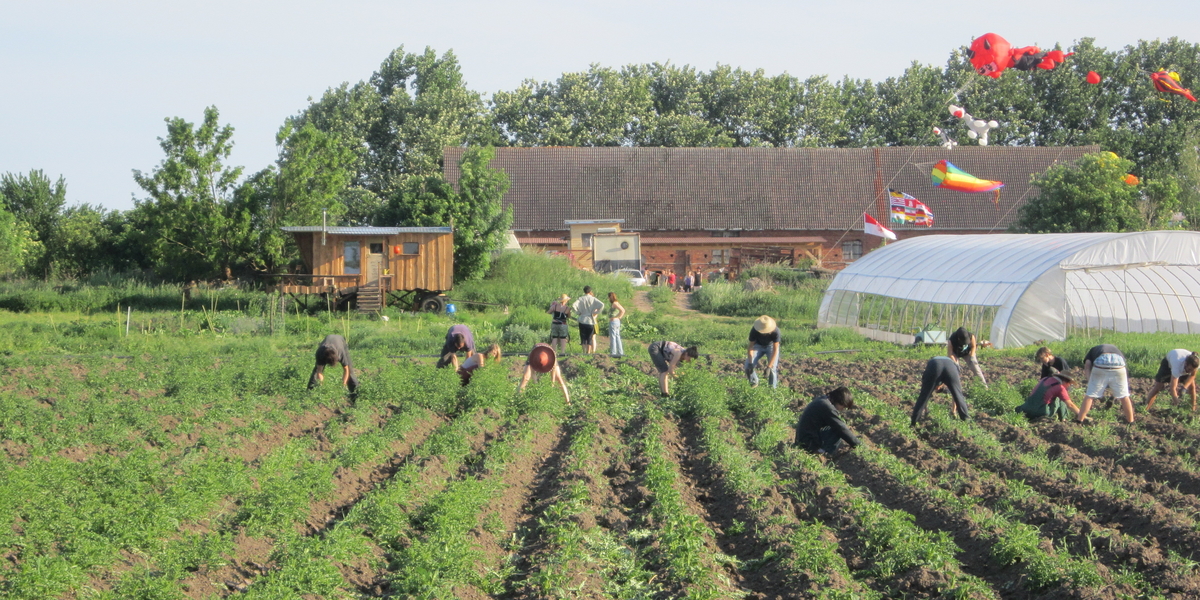 In the past few decades fundamental flaws in the global food system have been increasingly thrust into the public eye. The rise of industrial agriculture – combining increased use of fertilisers and pesticides with aesthetics-focused crop modification and long-distance transportation – has led to devastation of the environment and turbocharged an extractive model that thrives on exploitation of the world’s producers. The relentless quest to maximise production – and profits – per acre is destroying the very land on which this production depends. It is akin to setting your house on fire to save on energy bills.

The fragility of food systems is being exposed by the Covid-19 crisis as global production and transportation have been rocked. The UN Food and Agriculture programme has warned of ‘biblical’ famine threatening hundreds of millions of people.

Alternative models of non-industrial food production have historical roots stretching back decades and are numerous in their iterations. Community-supported agriculture (CSA) is one example. As a practice it seeks to connect consumers directly with producers, with the aim of fostering community, creating fair exchange and sharing risks. The idea’s growth and popularity correlates with the rise of environmentalism.

Basta (‘Enough’ in Italian) is a CSA collective that has been running since 2013 near Berlin. The founders, Anna and Olli, bought a plot of land with the help of the Kulturland Genossenschaft (Cultivated Land Cooperative), in which small producers pool their resources to buy land and take it off the market. Individual farmers pay a yearly tariff back to Kulturland, while the land is owned in common.

The founders borrowed money to invest in tools, a greenhouse and storage space, and started producing vegetables for friends. Word quickly spread and soon they were producing for the wider community. The team expanded to five full-time workers and has grown to feed 150 Berliners. CSA exists in many forms but at Basta they are committed to what they see as its ‘original principles’: localism, ecological sustainability, common ownership and production for need rather than profit.

Basta operates a membership scheme that comes with a host of rights and responsibilities. Members pay an income-dependent monthly contribution designed to cover necessary costs. These include investment in equipment, rent and fair wages for the farmers, who receive the same amount of money irrespective of fluctuations in crop yields. This not only provides security but also means more relaxed working conditions. Decoupling of money from production also provides space for experimentation and non-commercial priorities, such as breeding crops for taste rather than aesthetics.

The produce is transported every Thursday to three self-run spaces in Berlin, where it is divided equally between the members. In the evening, members cook a vegan meal for the wider community in the self-run spaces, with a portion put aside for that purpose. Members are encouraged to fulfill other duties throughout the year, such as financial planning, assisting on the farm and welcoming new members. A few people come from the city to help fortnightly, and twice a year, at planting and harvesting times, they organise much bigger actions. The expected level of engagement garners a sense of responsibility for the upkeep of the project and fosters a resilient community.

As an example, in the first year of the project it rained so heavily that half the crops died. This might have spelled the end for a different venture before it had got off the ground. But in this moment of crisis a whole community was ready and willing to support the farmers, both financially and with their labour, and they made up for the loss over the next three years.

Basta is actively resisting the capitalist imperative to grow in size, limiting itself to 150 members. Its current size allows it to be efficient, while maintaining the human scale that is essential to its success, particularly in difficult times.

The good news is the model is relatively easy to replicate and communities can have an impact without waiting for legislation or big institutional changes. It does require capital to get it off the ground but with the help of supportive organisations (such as, in Germany, Kulturland and the Solidarische Landwirtschaft Netzwerk, ‘Solawi’; and, in the UK, the Soil Association and the CSA Network UK), it becomes a lot easier to overcome early obstacles. It is also possible to find help from other CSAs directly – for example Basta runs training programmes for those who want to start similar projects.

In Germany, the estimated number of CSAs went from four in 2003 to 279 today, spurred in large part by the establishment of the national network in 2011. The growth has been repeated across Europe, where such organisations now feed approximately one million people across the continent.

Projects such as Basta give people control over what they eat in an era when greenwashing and a complex global trade system make it difficult to grasp the full effects of our purchasing. They provide a guarantee of local, low-impact and ethical food we can trust. They can also be a useful vehicle in changing unsustainable expectations. In the context of modern consumer-is-king capitalism, it is hard to sell the idea that we shouldn’t always get what we want, when we want it. But when people interact with food as more than mere consumers, it helps create an appreciation of value beyond the price tag.

A wider shift to organic, local and cooperative growing and distribution would help to keep wealth local and strengthen communities. This can act as a defence against the monopolising and disempowering tendencies of late capitalism – an ever-more urgent imperative as we face the looming challenge of climate change. The food system as a whole accounts for over a quarter of global greenhouse gas emissions, including transportation, refrigeration, packaging and the production of synthetic fertilisers. Uptake of CSA at scale would reduce indirect emissions arising from systemic complexity, while preserving biodiversity and soil fertility.

Crucially, with the knowledge and capacity to create robust sources of local supply, these communities could build resilience into food systems vulnerable to crises such as the Covid-19 pandemic and climate change. Over-reliance on big agribusiness and corporate retailers leaves people vulnerable to food price-hikes and shortages should global supply chains be disrupted. In the future, projects like Basta may become a necessity, rather than a choice. Better we build up the networks, know-how and tools now, rather than being left unprepared if things get worse.

Leander Jones is a writer and journalist living in Berlin

This article originally appeared in issue #228 ‘Climate Revolutions’. Subscribe today to get your copy and support fearless, independent media