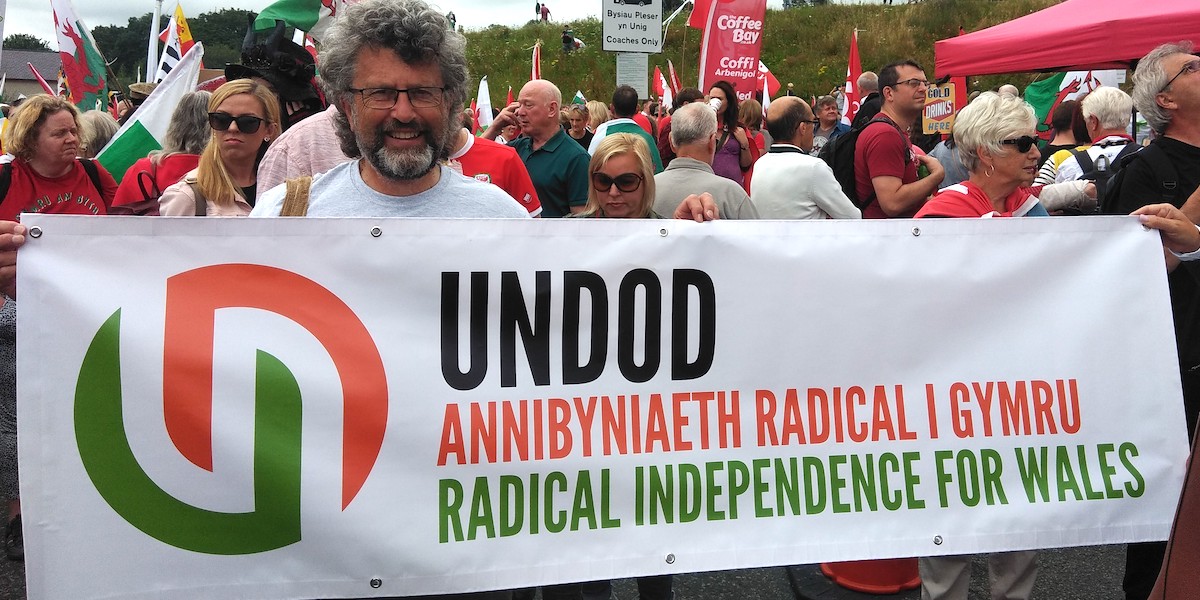 Undod (Welsh for ‘Unity’) is a group of people from all over Wales campaigning for a radical form of independence. We believe that an independent Wales will not be worth having if it is merely a leek-flavoured imitation of the UK state. Therefore, we seek to challenge the status quo in Wales itself by proposing a different ethos to the paternalistic, top-down, neoliberal approach manifested by Welsh Labour over the past two decades. On our blog, we have consistently advocated an approach based on our core values, and been critical of the Welsh Government and Welsh Labour where necessary, for example over aspects of its handling of Covid-19.

How, then, do we respond to Labour’s ideas as presented in the paper We, the People – The Case For Radical Federalism? Commissioned and launched by Wales’ First Minister Mark Drakeford, the report’s clear aim is to salvage the UK through the idea of ‘Radical Federalism’. All of the Labour eminences it quotes are confirmed and dedicated Unionists – from Nye Bevan to Gordon Brown, Mark Drakeford and Andy Burnham. Conversely, the paper is prefaced with W. B. Yeats’ line ‘Things fall apart; the centre cannot hold’ – a strange choice given Yeats’ support for Irish independence!

Between a rock and a hard place

Welsh Labour is caught between a rock and a hard place. The rock is a far-right Tory Government intent on rolling back devolution via its Internal Market Bill, while the hard place is the clear growth in support for independence in Wales – with the evisceration of Scottish Labour by the pro-independence SNP being a recent memory. An even harder place might be the potential morphing of Wales into Western England should Scotland become independent and Ireland move towards unification.

Despite the presence of a Welsh ‘Labour for Indy’ Group within the party, and despite a recent YouGov poll for YesCymru showing that a small majority of Welsh Labour voters would vote for independence, in We, the People the idea is dismissed outright. Labour in Wales continues to be a Unionist party – this paper is about rearranging the constitutional furniture within the UK house. It’s also about decorating the walls with warm fluffy phrases like ‘local citizens’ assemblies’, ‘designing a better future’, and ‘inclusive, collaborative ethos’.

However, a number of positive things can be taken from the paper. First, the recognition that the UK is broken and not fit for purpose. Second, the argument that power should be devolved within England. Third, the idea of extending devolution downward to several layers – regions, cities, towns, villages, communities. Fourth, recognition of the threat posed by the Internal Market Bill, which the Welsh Government is planning to challenge legally. And fifth, the cornerstones of ‘democracy, fairness, justice, climate stability and equality’, which would be accepted by the vast majority of people in Wales.

What We, the People doesn’t say

The core question in this debate should be: what form of governance would be best suited to Wales? Instead of this, the paper’s default position is that the UK as a concept is worth preserving. There is so much baggage associated with the UK, as currently shown in post-Empire angst and Brexit jingoism, that reform has to apply to the whole mindset of the ruling classes – and that includes the Labour Party establishment, as evidenced by Keir Starmer’s recent public embrace of the Union Jack and ‘British’ values. It is characteristic of the UK left that ‘British’ and ‘the country’ are seen as one and the same. And the use of the term ‘patriotism’ in the UK context is all about flag waving, exploiting armed forces veterans as PR props, and couching the concept in terms of Blitz spirit. Whereas the ‘nationalism’ so derided in this paper is about shared civic values, based on equality and internationalist in its outlook. It couldn’t be more different to UK-style patriotism.

The paper’s vision of a transformed future UK reads like a generic wishlist, and there is no real explanation as to how ‘radical federalism’ would deliver it, other than the hope that devolving power downwards would hasten the desired changes. Its ideas on workplace democracy, cooperative enterprises, and improving the lot of women, BAME, disabled and LGBT people, could be worked towards in an independent Wales equally as well as within the UK as currently configured.

Furthermore, there is a marked contrast between the paper’s socialist-sounding aspirations, and the neoliberal policies which have actually been pursued by the Welsh Government for many years. Reform of the UK would not make a bit of difference to this. The Welsh Labour Government’s vision towards 2040, expressed in the draft legislation Future Wales: the National Development Framework, is based on a continuation of the current exploitative and failed inward investment model, and on tying in regions of Wales with regions of England, rather than having an unifying model for Wales. To this can be added the Welsh Government’s full-blown backing for military-based industry, failed attempts at attracting the likes of Ineos, and fanatical support of nuclear power – all pandering to capital and vested interests rather than being of real lasting benefit to ‘We, the People’.

Indeed, the very title of the paper suggests a Labour Party which is a model of how to operate in terms of citizen assemblies, listening to the grassroots, and having a bottom-up approach. However, the election and leadership of Jeremy Corbyn as the ultimate manifestation of such a policy was viscerally opposed by the Welsh Labour hierarchy. Corbynism in Wales was always fighting against the tide, and now it’s back to business as usual.

The paper talks about a UK ‘free from patronage and privilege’, but it makes no attempt to deal with the major constitutional issue of the head of state. If radical reform of the UK is to be addressed, then the monarchy has to go. Not only because it is an anachronism with no place in any modern country, but because of the ongoing haemorrhaging of cash directly to the Queen’s coffers via the Crown Estate. It’s estimated, for example, that £879million annually for 10 years will be given to the Crown Estate after a recent auction of seabed licences for energy projects. It’s also an anomaly that Senedd and Scottish Parliament members have to swear an oath of loyalty to the Crown, but members of the Northern Ireland Assembly don’t.

The paper’s statement that, after its radical reform, ‘the UK state would perform only those strategic tasks which could not be performed at a more local level’ begs the question – how can those tasks possibly be anything other than a continuation of the current England-dominated ‘British’ policies on defence, foreign policy, and infrastructure? There would presumably be no resolution of the nuclear arms issue, which is particularly pertinent to Scotland and its longstanding opposition to Trident submarines at Faslane.

Debate on the future of the UK is essential, but the debate cannot be framed with the presupposition that the continuation of the UK state, albeit in a different form, is the only acceptable outcome. Welsh Labour’s contribution in We, the People is a curate’s egg, but better that than no egg at all!

‘A terrible beauty is born’ is the closing line of W. B. Yeats’ poem ‘Easter 1916’. It may well come to apply after the traumatic convulsions of the UK’s death rattle.

Robat Idris a member of Undod and founder of SAIL, co-authoring its vision for community development in Gwynedd and Ynys Môn.