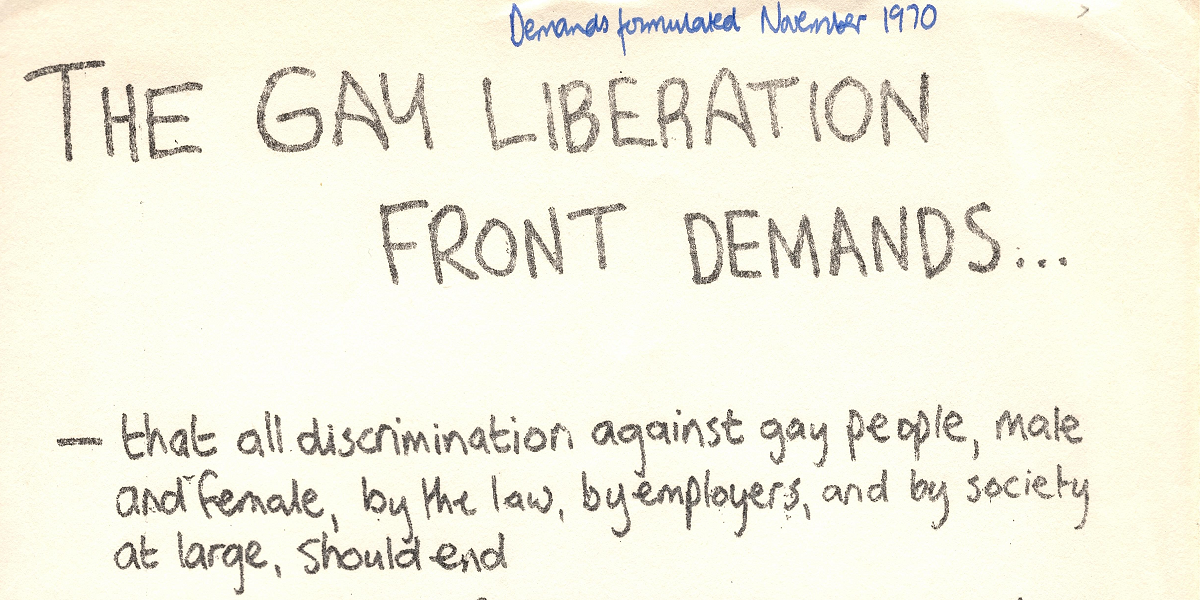 On a mild November evening in 1970, between 50 and 150 people gathered outside London’s Highbury and Islington Station before marching arm-in-arm to Highbury Fields. There they read a list of eight demands, shouting ‘Right on!’ after each one.

The demands included ‘that all people who feel attracted to a member of their own sex should know such feelings are good and right’, ‘that all discrimination against gay people, male and female, by the law, by employers, and by society at large, should end’, and ‘that gay people be free to kiss and hold hands in public’. After this, as one of the demonstrators later wrote, they ‘kissed warmly and perhaps a little dramatically for the press’.

This was the UK’s first ever LGBTQ+ demonstration – and 27 November 2020 marks its 50th anniversary.

The demonstration was organised by the Gay Liberation Front (GLF), formed only weeks before at the London School of Economics. It was protesting the treatment of prominent Young Liberal politician Louis Eaks, who had been arrested for ‘gross indecency’ by policemen acting as agents provocateurs. His ‘crime’ was approaching several men on Highbury Fields–— at the time a well-known place for gay men to meet – and asking for a cigarette lighter.

In the words of GLF newspaper Come Together, GLF members were ‘seething with anger at this [arrest], the latest amongst hundreds of crimes committed against gay people by the police and the establishment every year.’ While the entrapment by ‘pretty policemen’ of Eaks and others was an issue which immediately impacted men, a number of lesbian and trans women also joined the demonstration, as long-standing GLF campaigner Nettie Pollard, now 71, recalls: ‘in defiance and solidarity’.

The protest was a small-scale affair: in addition to a relatively small number of attendees, it only lasted about an hour and a half. However, its significance crosses decades: it marked the emergence into the public eye of the gay liberation movement, and many of the demands GLF voiced that day have since been won.

Beyond the campaigning element of the protest and its demands, the joyous and defiant act of LGBTQ+ people publicly coming together and asserting their presence was also significant. As Aubrey Walter later wrote: ‘it was a very exhilarating moment for homosexuals in Britain, to actually be banded together in public for the first time.’

Stuart Feather, now 80, attended the protest, and remembers the demonstrators feeling ‘very high on the experience and what we’d done’ when they retired to the nearby Cock Tavern for a celebratory drink. As the adrenaline wore off, they began to realise the significance of what they’d achieved. ‘It also began to dawn on you wow, we’ve actually done it, we’ve actually been out in public and held a demonstration. Admittedly it was at night, and there were very few people around,’ Stuart laughs, ‘but nevertheless we’d done it and it really built up one’s courage.’

Nettie Pollard didn’t attend the Highbury Fields demo – she became involved in GLF a few months later, in April 1971. But when she talks about her first encounter with the movement, it has the same revelatory character described by Stuart:

Saying ‘I’m out and I’m proud’, in public, all together, as a unit, was something that had never happened before

‘It was the first time people found other people who weren’t prepared to be inferior, sick or sinful, but actually part of a liberation movement for everybody…  saying I’m out and I’m proud, in public, all together, as a unit, and that was something that had never happened before. Just an enormous sort of solidarity between everybody.’

From past to present struggles

GLF still exists, and today’s activists – a mixture of the older generation such as Stuart and Nettie, and a younger generation of campaigners – will be meeting again at Highbury Fields to commemorate and celebrate the original event (all Covid-19 compliant, of course).

While marking the historic significance of the event and the heroism of those who took part that day is a crucial element of the recreation, this year’s event also has vital political significance. Some of the demands the protestors read out in November 1970 may have been secured, but others remain heavily contested.

The demand ‘that gay people be free to kiss and hold hands in public, as are heterosexuals’, for example, remains unrealised, with the latest National LGBT Survey finding that over two-thirds of LGBTQ+ respondents had avoided holding hands with a same-sex partner for fear of a negative reaction from others. And it is a continual struggle for ‘people who feel attracted to a member of their own sex [to] know such feelings are good and right’, with Stonewall research revealing that one in five LGBQ+ people have experienced a hate crime or incident in the last year (rising to two in five among trans people).

GLF’s focus on ‘liberation’ and the freedom to live a full, thriving, dignified life highlights what the academic Jacob Breslow recently called the ‘disjuncture’ between the ‘mainstream cultural imaginary in which gay rights have been won’, and the daily reality of LGBTQ+ people in the UK, where harassment is widespread, hate crimes are a daily event, and vocal expressions of transphobia by prominent public figures are treated as a matter of free debate.

According to the mainstream understanding, as long as negative liberties – freedom from legal discrimination, for example – have been granted, then ‘gay rights have been won’. Under this conception, according to Brislow, ‘social justice happens immediately through the law’. But GLF challenged such complacency with their focus on the necessity of positive liberties, such as being free to live in a society in which all sexualities and gender identities are recognised as ‘good and right’.

Dani Singer, 30, is one of the younger generation of GLF campaigners. Dani’s experiences organising with PreEPster and others for the roll out of the HIV prophylactic PrEP have made Brislow’s ‘disjuncture’ all-too-clear. Reflecting on the painstakingly difficult battle that had to be fought to make PreEP generally available, Dani notes that the homophobic outlook and prejudiced moralising which underpinned the arrest of Eaks is still widespread:

As Nettie argues: ‘you can’t just separate gay rights from the whole of the rest of society, and what kind of society we want, and what should we be working toward … rights can be taken away, can’t they? The only hope, really, is for a radical transformation of society. That’s the only way it might actually work, and end up with people being free.’ 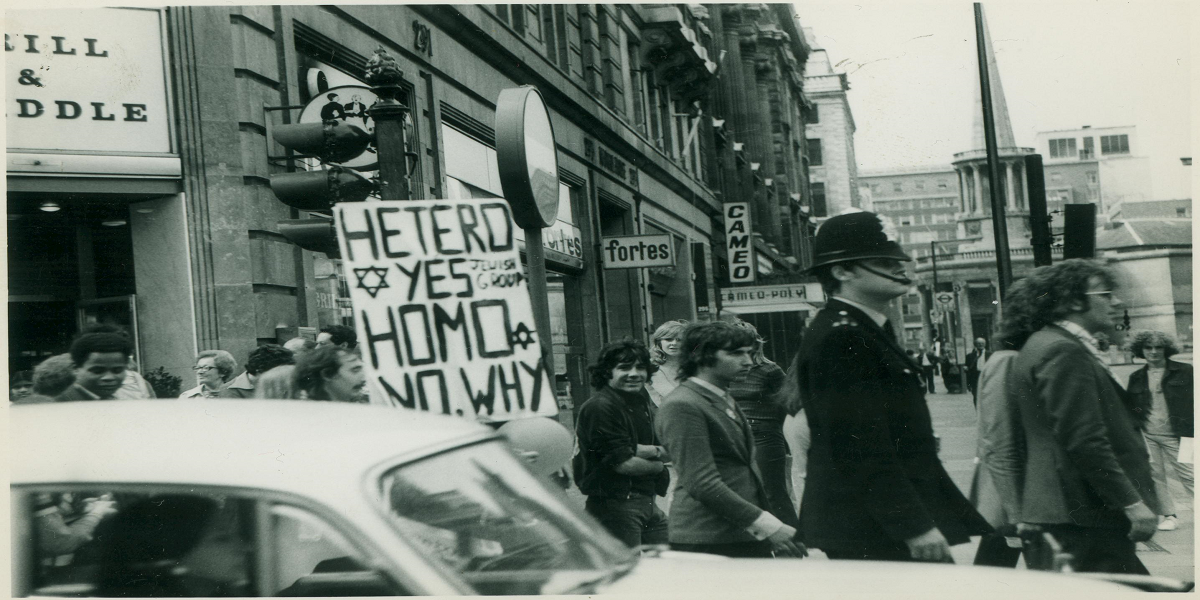 ‘Magic and power and inspiration’

The protest, and the defiance of those who marched that day, continues to serve as a wellspring of strength and inspiration for a younger generation of activists. ‘I can only really imagine,’ Dani says, ‘and have sort of vaguely relatable experiences, of just being there as an out queer person, in a situation when you know that’s not wanted, but doing it with such juicy pride, oh gosh, it just makes me shiver a little bit. I think that’s the feeling that sparks my activism and my desire to become a spectacle of queerness in a world that still doesn’t really want it.’

For Nettie, the impact of the demonstration was profound, then and now. ‘GLF was just like an explosion of magic and power and inspiration – and it still is.’

Stuart views it in slightly more plaintive terms: ‘I always thought of [GLF] as a stellar event … it was like a comet passed over this country, if you like, and it came, and it was suddenly there, it appeared in the sky, and after a while it disappeared.’

But the comet hasn’t passed out of sight for good – and longstanding GLF campaigner Andrew Lumsden, 79, is confident that it will light up the sky again in 2020. ‘It’s going to be visually spectacular,’ he says, his eyes twinkling, ‘and the biggest, most important gay rights event since roughly the time of Nero, I should think.’

Sam Stroud is a social researcher and journalist from Cardiff. Details of GLF’s 50th anniversary celebration can be found here