Today, on the UN International Day of Solidarity with the Palestinian People, students at over 30 UK universities are taking action on their campuses against Israeli apartheid. Here are 5 reasons why.

UK universities are complicit in the Israeli occupation

Despite most institutions holding “social responsibility policies” which often include restrictions on investing in companies who conduct business which leads to human rights violations, UK universities remain deeply complicit with Israel’s apartheid regime through their investment and institutional links. This complicity manifests in numerous ways. One example is the University of Manchester’s ongoing investment in the company Caterpillar, which supplies the armoured bulldozers for the Israeli army to demolish Palestinian homes, schools, olive groves and communities. Other universities such as Sheffield Hallam lease their spaces and equipment to arms companies including BAE systems, a supplier of arms to Israel and Saudi Arabia. Meanwhile, King’s College London has established a partnership with the Israeli Institute of Technology in Haifa, known as the Technion. This institution collaborates with numerous arms companies on technological endeavours which have seen the creation of remote-controlled bulldozers used to destroy Palestinian homes, as well as the notorious electronic surveillance system used for Israel’s illegal wall in the West Bank. All of this whilst King’s proudly parades Desmond Tutu as one of their high profile alumni – a man who famously called for a global boycott of Israel and condemned it as an apartheid state. In the face of such blatant hypocrisy by UK universities, students are doing vital work holding their institutions to account and demanding they live up to their social responsibility policies.

Students should have a say in their institution’s investments

In the current highly marketised UK higher education system, there is very little scope for students and staff to formally shape their institutions’ investment and partnership policies. This fundamental lack of democracy means that even if students collectively disagree with university funds being invested in human rights violations, the formal structures of UK universities deny them meaningful opportunity to change this. That’s precisely why students up and down the country are building grassroots campaigns, both inside and outside of committee meetings and board rooms, aiming to force universities to change their positions. This was seen most recently in Leeds, where the university announced they were divesting $1.2 million from three corporations (Airbus, United Technologies and Keyence Corporation) which trade military equipment with Israel. Despite the university refusing to publicly acknowledge it, this followed a sustained BDS campaign run by Palestine solidarity activists. These campaign models have seen success in other areas too; perhaps most notably the nationwide Fossil Free campaign which has seen dozens of UK universities pledge to divest from fossil fuels following sustained local campaigns by student activists.

UK universities are notionally committed – at least in principle – to the idea of education as crucial pillar of society. But in reality, they are helping to prop up a regime which hampers access to education to countless Palestinians every single day. Israel is the only country in the world that systematically prosecutes children in military courts – between 500 and 700 each year. The Israel Prison Service revealed that an average of 204 Palestinian children have been held in custody every month since 2012; children who should be going to school and getting an education. Secondly, Israel is notorious for its military targeting of public services included schools and other educational institutions. During Operation “Cast Lead” in 2008/9, Israel bombed the Islamic University of Gaza, and they struck it once again during their 2014 assault on Gaza. These factors, combined with daily harassment and violence, restriction of access to vital resources, and deliberate obstruction of movement at checkpoints, means that Palestinians’ access to education is profoundly hampered. It is of significant political importance that UK universities stand against this in every possible way.

Students taking action today against Israeli apartheid follow a long and rich history of UK students practising international solidarity and promoting peace and justice across the world. From anti-Vietnam War protests in the 60s, to anti-Iraq War walkouts in the early 00s, students have often been a crucial part of mobilisations against military repression and violence. Perhaps the most notable example, which has numerous parallels with contemporary Palestine solidarity activism, was student action against Apartheid in South Africa during the 70s and 80s. Alongside coordinating a number of large street protests, the National Union of Students, in collaboration with students’ union across the country, threatened a nationwide boycott of Barclays Bank if it did not withdraw from South Africa. After a sustained campaign, Barclays eventually decided to withdraw its support, citing NUS as a significant factor of influence. The call for the global community to boycott Israel until it complies with international law was made by Palestinian Civil Society in 2005 – UK students are today answering that call and continuing to practise international solidarity with oppressed people, as they have done for decades.

The global Boycott, Divestment & Sanctions (BDS) movement is growing in strength. Whilst Israel continues to flout international law and commit human rights violations against Palestinian people, BDS is a tool which enables both individuals and organisations who believe in freedom, justice and equality to take non-violent action to oppose Israel’s crimes. Just last week, 2 big victories for the global Boycott, Divestment & Sanctions (BDS) movement were announced. The first saw the Quakers in Britain commit to divesting their central funds from all companies profiting from Israel’s occupation of Palestine, whilst the second saw the home rental company Airbnb commit to removing listings in Israeli settlements in the occupied West Bank. These announcements follow a host of other victories for the BDS movement in recent months, including decisions by artists Lana Del Ray and Lorde to pull out of planned concerts in Israel in accordance with the call for a cultural boycott. History has shown us how powerful and effective this tactic can be, as is further illustrated by Israel’s attempts to clamp down on BDS activism. Today, action by UK students is just one part of the growing global movement calling on Israel to end its oppression of the Palestinian people and respect human rights.

Huda Ammori is the Campaigns Officer at the Palestine Solidarity Campaign

Israel claims to be acting in self-defence when its army shoots down Gazan protesters. Norman G. Finkelstein and Jamie Stern-Weiner debunk that myth. 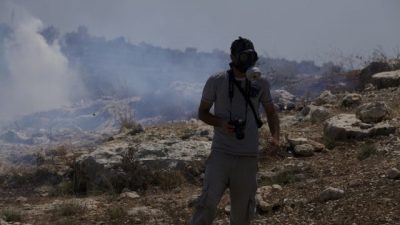 The move is a stamp of approval for Israel’s brutal occupation, writes Asad Rehman.