#PostReferendumRacism has exposed the racist and xenophobic belly of Britain. Luckily, there is a lot that you can do. Siobhan McGuirk has gathered 10 suggestions, feel free to add your own below 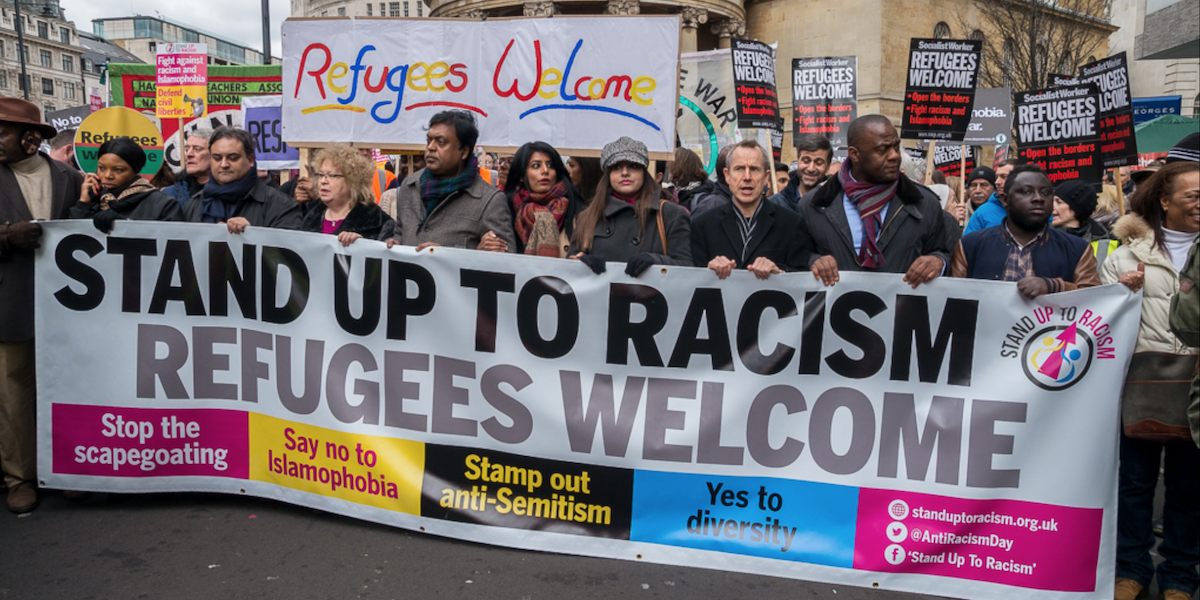 Following the EU Referendum result, racially motivated attacks have increased dramatically across the UK. Though the Leave campaign did not make Britain newly racist or xenophobic, the anti-immigrant rhetoric of Brexit debates was a shot in the arms to right-wingers. British fascists have been emboldened.

Onlookers recoiled in shock as news broke of another Polish child threatened, another Muslim woman cornered and heckled, another xenophobic banner unfurled (as it was in 2013, and 2011). Now, that shock is fading, and media attention turning away. Yet the attacks continue, and Britain is still institutionally racist. Symbolic acts of solidarity won’t address the problem. Building on advice offered by anti-racist collective Wretched of the Earth, here are some ideas for taking action:

Anti-fascist and anti-racist organisations (from faith-based initiatives and offshoots of political parties to creative projects and radical campaign groups) have been active in the UK for decades. Although they sometimes work together, the organisations listed below take different approaches to their work and prioritise different types of campaigns. Some work at the national level, others have local chapters. Grassroots groups often emerge to respond to specific local issues. Find a group that fits with your own outlook to ask how you might support their activities: attending meetings, handing out flyers, donating funds, writing letters to elected officials, joining rallies and protests, translating literature – whatever works for you.

We must address structural discrimination as well as sporadic acts of violence. Immigration policy is one area of pressing concern. The xenophobic outbursts we have seen on busses and in city streets are echoed in the cells and hallways of UK immigration detention centres, where imprisoned asylum seekers go on hunger strike to protest over horrific conditions. They are echoed in the Chamber of Commons, where the Prime Minister decries the “swarms” of migrants in Europe fleeing turmoil , and where Theresa May suggest immigrants do not have human rights. They are echoed on the front pages of our national newspapers, which demonize migrants and call for harsher treatment of refugees. A variety of groups are fighting punitive immigration laws and supporting immigrant communities. Join them, and follow them on twitter for news that you won’t see elsewhere. 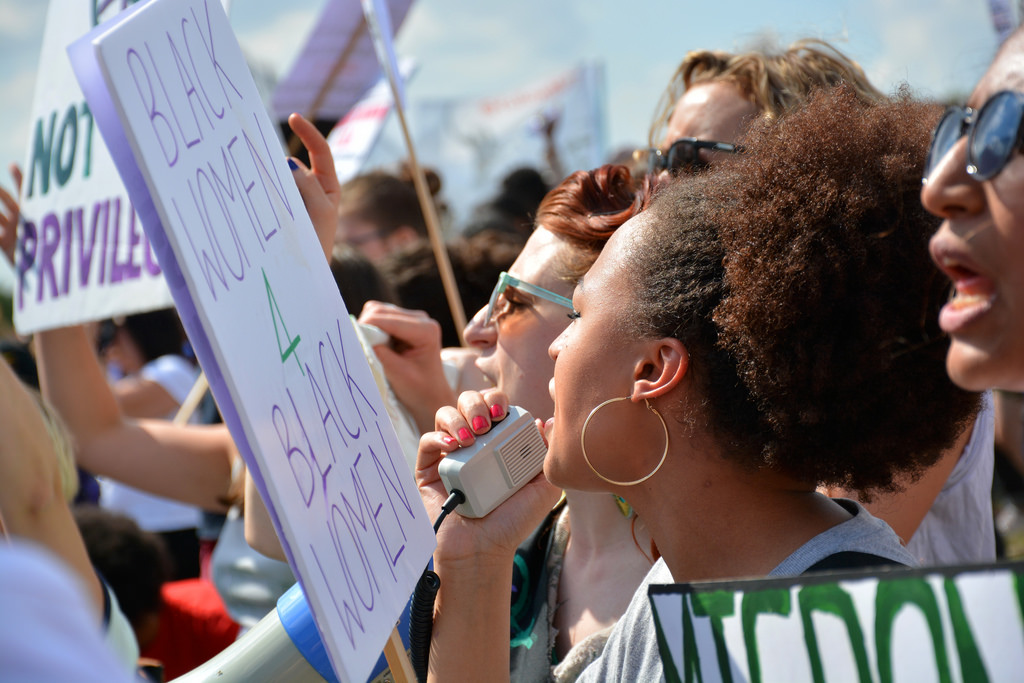 A protest to shut down Yarls Wood Migration Detention Centre

The explosive rise in #PostReferendumRacism cannot blind us to Britain’s longstanding history of xenophobia, racism and fascism — the deep roots of which can only be dismantled through dedicated and broadly focused action. Silence is complicity. The Metropolitan Police Force uses racial profiling, so speak out. The British judicial system is institutionally racist, so speak out. Universities are monitoring Muslim students, so speak out. British employers habitually discriminate against Muslim and non-white workers and job candidates, so speak out. Local housing authorities similarly discriminate, so speak out. Black Lives Matter marches and rallies are taking place across the UK. Join them.

The London Campaign Against Police and State Violence

The groups listed above focus on political campaigns. National and community cultural centres and places of worship host a diverse range of educational programs and celebratory events, such as film series, art and dance evenings, guest lectures, language classes, and religious festivals. You can support local communities by learning about, participating in, promoting or helping to fund those event. Reach out to your local Mosque, Synagogue, or Gurdwara, for example, to ask how you might best support them in every day terms or in the face of oppression. Online you can follow independent bloggers and vloggers telling their own stories and sharing direct experiences of oppression and resistance – you might have your own experiences to share or benefit from listening carefully to other points of view.

5. Intervene and report attacks — when it is safe to do so

In recent weeks, videos of emboldened racists screaming at people on buses and trams have gone viral. In the clips, bystanders often lower their gaze, and keep quite. The prospect of intervening can be terrifying, and it may be unsafe to place yourself in the line of fire. Yet explicitly challenging racism remains important. United Against Racism has an excellent guide to respond ing to racist incidents. You can also record and report what you see to the police. Be wary of involving the police without consulting with the targets of abuse, however. Police intervention is not welcome or comforting for many.

iStreetWatch is an independent group monitoring racist and xenophobic harassment

You do not need to wait around on busses or High Streets to encounter racism and xenophobia. Pick up a copy of The Sun, or The Daily Mail. Look at what people are being told to think, fear and hope for. If a headline disgusts you, write to the editor. Write to your MP—whatever their party—to raise your concerns and ask them what they are doing to address racism, incitements to violence, and discrimination in your constituency. Talk to your friends and family, sharing your concerns and—if relevant—taking time to engage with them on issues they see through a racialised, or xenophobic lens. Tell them if their harmless jokes are not harmless.

The day before a far-right fanatic murdered MP Jo Cox, Gary Younge argued in The Guardian that the Labour Party had long failed to contest racism and xenophobia, choosing instead to pander to anti-immigrant sentiment in an effort to win votes. Indeed, policy proposals suggested by some senior Labour MPs are deeply worrying. Yvette Cooper, for example, says the Conservative proposal to initially deny benefits (including child and in-work support) to EU immigrants is “a good start”. Although Cooper has previously advocated for refugees, she here calls for “stronger border controls… to tackle the serious problem of illegal immigration”. Her word choice is telling. The Labour Party cannot out-UKIP UKIP, but it seems eager to try. We must demand that our MPs take heed of Younge’s insight and engage with voters honestly about the positive realities of immigration. Pandering to xenophobia is only politically expedient to the right.

While their austerity measures ravaged the UK, right wing politicians eagerly pointed to immigrants as causes of economic degradation. With Brexit, their scapegoating has come back to haunt them. Members of the British working class are being manipulated—encouraged to divide and hate rather than oppose austerity and neoliberalism. Yet, despite polemic geographic depictions of British society in the media, the British working class is now incredibly diverse, and includes many immigrant labourers (including many living in London). In fact, immigrants to the UK often work in the lowest-paid jobs and experience significant workplace discrimination. They are exploited in the same, often worse ways as all people who has seen their wages frozen, benefits cut, zero-hour contracts embraced, health services slashed, and their libraries, parks and other public amenities disappear—while being told that the economy is recovering. The 2015 UK Immigration Bill laid groundwork for further exploitation. Austerity has bred disillusionment and despair. Defending and strengthening workers rights in the UK is intertwined with combatting racism and xenophobia—and improving standards of living, for all.

9. Recognise your complicity – and refuse to perpetuate oppression

Communities become “marginalised” when they are pushed to the margins of society. Marginalisation is being forced into low-paid jobs with few if any labour protections; being displaced because of soaring rents and shortages in public housing; having welfare support payments slashed year upon year; seeing higher education become unaffordable. In the UK, millions of people—rightly or wrongly—feel severely marginalised. They are angry and vulnerable as a result. In Britain’s urban centres, low-paid workers clean high-rise offices while young middle-class graduates and property developers fuel rapid gentrification. The sheen of multiculturalism cannot disguise deep-seated and perpetuated inequality across the UK, fuelled by austerity, privatization, rollbacks of labour protections, (see above) and cuts to social housing. If you are not feeling squeezed right now, you are likely gaining because others are being marginalised. You must be ready to redress the balance.

SHOUT is a national campaign for social housing

10. Be ready to critique the EU

Over recent weeks, accusations of racism and xenophobia have been laid solely at the feet of Leave voters and campaigners. By implication, the EU has been reimagined as a beacon of tolerance—a place of open borders, free from racism. This is simply untrue. While Brexit may be painful and disheartening for many reasons, we must not let nostalgia for the EU obscure its faults—otherwise, we cannot learn from them. The EU has, for example, repeatedly moved to fortify its borders and enacted policies to make crossings increasingly perilous for migrants. Recently, EU member states united behind legislation to criminalise people offering humanitarian assistance to immigrants—people such as you, potentially, if you are reading this. The EU, on the whole, is also pro-austerity.

Overall, we must not forget that if the Referendum result had been different, racism and xenophobia would still exist in the UK—and throughout Europe. Far Right parties have been gaining traction for over a decade, and popular European governments have enacted startlingly racist and xenophobic laws. The Referendum has only opened some eyes to racism and xenophobia — it has been here for a long time. To fight back against it we have to be in the fight for the long haul.

We encourage you to add your own suggestions in the comments below.