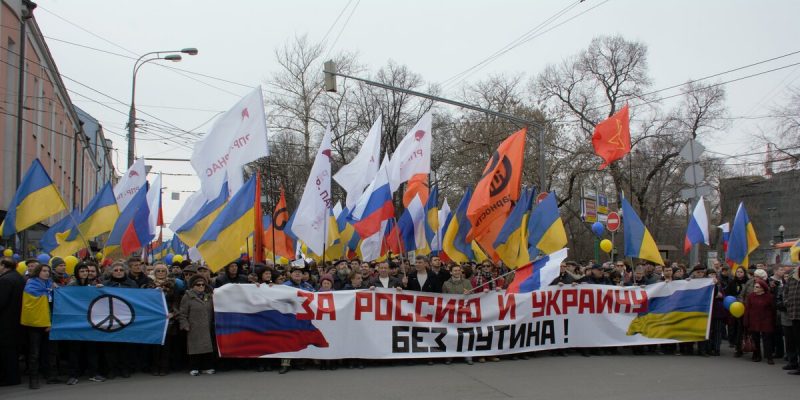 One early initiative in the ‘no war’ movement of Russian citizens, now filling the squares of Moscow, Saint Petersburg and other cities and facing brutal repression, was this public statement opposing military action in Ukraine. One of its organisers, Dmitri Makarov, writes with Mary Kaldor against Cold War thinking and the importance of solidarity and dialogue between anti-war movements across these former divides.

The only way to end the war in Ukraine is through a combination of Ukrainian resistance and Russian opposition. Despite the crackdown on all forms of opposition in Russia, thousands have been brave enough to protest the war in at least 53 cities across Russia; thousands have been arrested, yet the protests are continuing. Many local councillors, two members of Parliament, theatre directors, sports personalities, chat show hosts, as well as the newspaper Novaya Gazeta are publicly expressing opposition to the war.

The mood in Russia is a mixture of confusion, despair and defiance. Those who are part of the regime’s support group are engaged in a self-fulfilling prophecy, pointing to the Western response to the war as evidence of Western aggression. Many others have lost hope and are discussing how they can leave the country. And there are also large numbers who are asking how they can build an anti-war movement in the face of widespread repression. This petition was a first step in this direction; now there are many discussions among different groups and networks about how to take this forward.

What is needed now is for peace and human rights activists in the West to organise an intensive dialogue with peace activists across Russia in order to develop a common transnational strategy. It is a dialogue that needs to include activists from Belarus and Ukraine as well.

A starting point is the need for a shared understanding of the war in terms of democracy and human rights. The primary concern of the Russian regime is to stay in power, and they fear that democracy in Ukraine could offer an example to be followed in Russia. They cannot accept democracy in Ukraine any more than the Assad regime could accept democracy in Syria. Such an understanding is needed to counter dominant interpretations of the war that tend to focus on geopolitics rather than democracy and human rights, and which also marginalise the role of anti-war activism.

There is a tendency to explain the war in binary terms, just as during the Cold War: the Western establishments attribute the crisis entirely to aggressive behaviour by Russia while the Russian state justifies its behaviour as a response to NATO expansionism. Any anti-war movement in Russia is treated by the Russian state as a creation of the West, while those in the West who oppose NATO expansion have often appeared to be condoning Russian behaviour.

During the Cold War period, activists were caught in a similar trap. Peace campaigners in the West were politically marginalised because they were viewed as a Soviet fifth column, while human rights activists in the Soviet Union and Eastern Europe were treated as tools of Western Governments. It was only by coming together, by stressing both peace and human rights, that it was possible to expand their political influence.

History is usually told from above, so the importance of the dialogue between peace and human rights movements across the East-West divide in contributing to the end of the Cold War is often underestimated.

In recent years in Russia, major protests have been suppressed and the apparatus of civil society – human rights institutions, opposition political parties, NGOs of various types and independent media – has been attacked and dismantled by the state, making active protest more and more difficult. The crackdown on civil society is rationalised by the argument that such groups are “foreign agents” promoted by the West.

If we want peace in Europe, then anti-war activists in both the West and Russia need to abandon binary world-views. It is very important for those who oppose militarism and arms races in the West to engage in a dialogue with those who press for peace and human rights inside Russia, and find ways to jointly pursue their common aims.

Aggressive behaviour by the Kremlin needs to be understood as the manifestation of a very contemporary phenomenon – a new form of right-wing authoritarian populism that combines crony capitalism and exclusive nationalism – which can be found not just in Russia but in Johnson’s Britain or Trump’s America, not to mention Modi’s India or Bolsonaro’s Brazil. It can be argued that the West contributed to this phenomenon in two ways.

First of all, when the Cold War ended, many hoped that this would lead to the demilitarisation of Europe. The Soviet alliance, the Warsaw pact, was dissolved – but NATO continued to exist and indeed expanded. This was partly inertia, partly a response to requests from aspiring members in Central and Eastern Europe, and partly a consequence of pressure from the military-industrial complex. Putin would probably have acted in an aggressive way even without NATO expansion, but it was quite unnecessary for the West to provide him with a pretext. A chance to restructure European security architecture with a focus on human security and complex crisis response was missed.

More importantly perhaps, the West introduced market fundamentalism to all the post-communist countries. Privatisation and liberalisation produce the combination of crony capitalism and socio-economic inequality that has provided the context for the new authoritarianism in many places. Despite some critical rhetoric and talks of sanctions, Western elites have mostly condoned the stocking of extracted Russian wealth in its own financial centres, breeding further corruption and impunity.

There is a need for activists all over Europe to come together and resist the new right-wing authoritarianism. There is a need for intensive transnational communication – which, with the internet, is much easier now than during the Cold War – in order to develop shared analyses of what is going wrong and how to counter dangerous tendencies. All of us need to draw attention to widespread human rights violations in Russia and in the countries around it, especially in the Crimea and Donbas region as well as other grey zones and contested territories. The key focus should also be on defending and helping to strengthen the institutions of civil society that are under attack in the post-Soviet space as well as at home. And anti-war activists, wherever they are based, need to challenge continued militarism and arms races by all sides and also build connections and networks with each other.

We need to engage in a common search for solutions to this continuous and urgent crisis, which has not only a military or human rights dimension, but also a conceptual one. Can we envision a Europe which doesn’t stop at the borders of the EU? A civil society that sees beyond national differences and resists the isolation and divisions reminiscent of the Cold War era?

Above all, this crisis offers an opportunity for a new pan-European security system that is based on human security rather than national security, multilateralism rather than geopolitics. Human security is about the security of individuals and the communities in which they live. The implication is that the security of Ukrainians and Russians matter just as much as the security of Brits or Americans. It is also about security from poverty, disease, and environmental degradation as well as from repression and armed attack. It has human rights, the rule of law and justice at its core.

A discussion about creating such a system would include three components:

A call for such discussion is being made in this recently published appeal by civil society activists, academics and politicians from across Europe. Arms races and militarization do not ultimately ensure the basic human need of security and protection if not supplemented by human rights, participative democracy, economic and social justice. People who believe this should join the call and contribute to the movement.

Dmitri Makarov is a human rights and anti-war activist, and a Council Member of the Moscow Helsinki group.

Mary Kaldor is Professor of Global Governance at the London School of Economics and a peace and human rights activist.