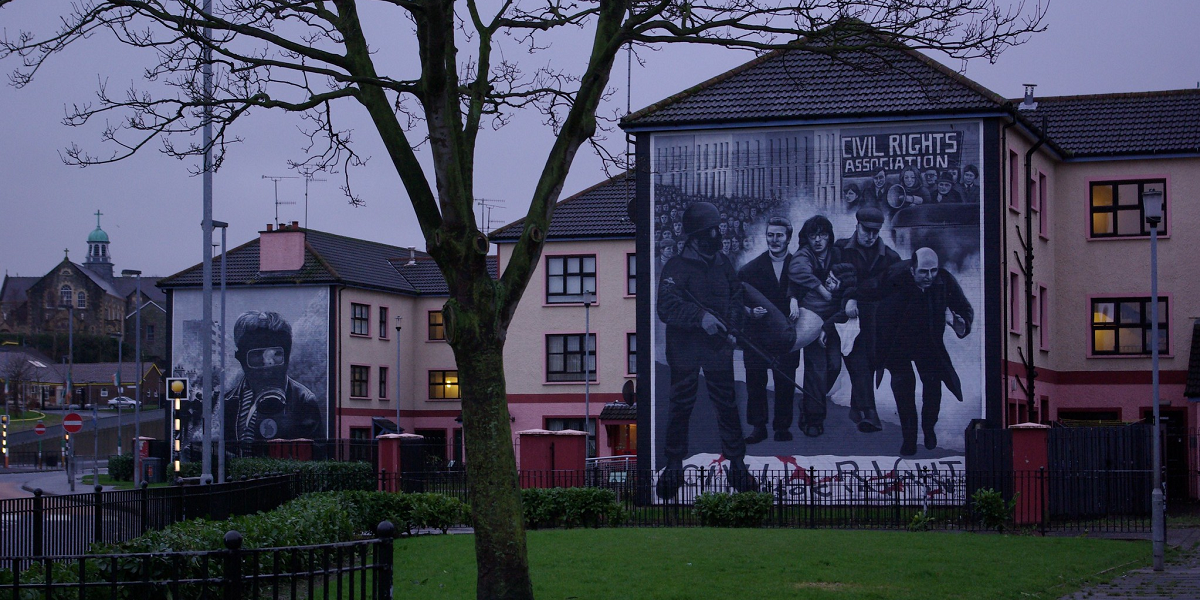 A mural (right) depicts Jackie Duddy, shot dead on Bloody Sunday, carried away by a local priest. Credit: Will Bakker

‘I forced myself to look back inside again. In a surprisingly short time I found that I was no longer bothered by the sight. But for the smell, I might even have been looking at a lot of old bicycles lying on the ground… Now I had seen something more revolting than I could have imagined – even the cinema could not have produced such a spectacle – and I had found that I hardly minded at all. From that time on I felt more sure of myself,’ Brigadier Frank Kitson, former commander-in-chief of the British army, veteran of its dirty wars, writing about hunting for an informer’s body in a Kenyan morgue.

What remains to be said about Bloody Sunday? What has been said? The British army’s Parachute Regiment massacred civil rights marchers on the streets of Derry. What was also said? That we brought it on ourselves. Feckless, stupid Fenians with the stupid want in us. Unemployed. Unemployable. Hooligans. Better walking mangy dogs in the muck. Couldn’t keep time anyway. They kept the bodies in big fridges sure, till the army moved out, and then they planted them around the city themselves. Just to impinge the reputation of civilised people. The uncivilised always know how to drag the civilised down.

I have to admit there is a want in us. There are many wants in us. But maybe now that one of those wants has been sated – that Britain in its munificence has spoken candidly – we can also speak rationally. The dead of Bloody Sunday are innocent. And maybe now that their innocence has been vindicated by government, by media, by the well-to-do who were afraid to speak when it mattered, we can start to reclaim their guilt. Interrogate it, honour it, construct new things out of it.

They broke the law. The people who marched on Bloody Sunday broke the law. They were civilly disobedient. When the law decided that it would put people in internment camps and subject some to torture, that it would gas children and shoot mothers, people broke the law. When the law decided it was illegal to demonstrate against these crimes, people marched anyway. They brought their kids along to break the law with them. It was a free for all. One gorgeous, stinking, dangerous free for all.

When power is confronted effectively – in an office, on the street, from somewhere it doesn’t expect – there is a moment of outraged ‘How dare you!?’ about the response from those previously in charge which exposes power’s vulnerabilities. Then, power retrenches, it regroups, prevaricates in the face of reasonable demands, pools its resources, strategizes, attempts to bribe, corrupt, repress, deals death if deemed necessary. Deals death in an exemplary manner. Deals death in places like the Rossville Flats and Glenfada Park and Ballymurphy. Deals death in the home places of the poor who got above their station. But the memory of power’s vulnerabilities remains imprinted upon the minds of those who challenged it. If they survive, of course.

And the memory of the vulnerability grows, expands, takes new forms; stories are built around it, tactics are devised to exploit it, some people spend the rest of their lives trying to get back to that point where power seemed ready to topple. If only it could be pushed a bit harder, if only there were a few more willing to put their shoulders into it. ‘To articulate what is past does not mean to recognise “how it really was”,’ wrote Walter Benjamin in his final days, ‘It means to take control of a memory, as it flashes in a moment of danger.’

But here’s our mate Kitson again, he of the broken bicycles, a key member of the British military in Ireland at the time of Bloody Sunday, ‘If a fish has got to be destroyed it can be attacked directly by rod or net… But if rod or net cannot succeed by themselves it may be necessary to do something to the water…’ When the Brigadier was called to give evidence at the belated Saville Inquiry into the massacre, he explained that it could have had nothing to do with him as he was on leave that weekend in 1972. His excuses were accepted by Saville, despite obvious evidence to the contrary. 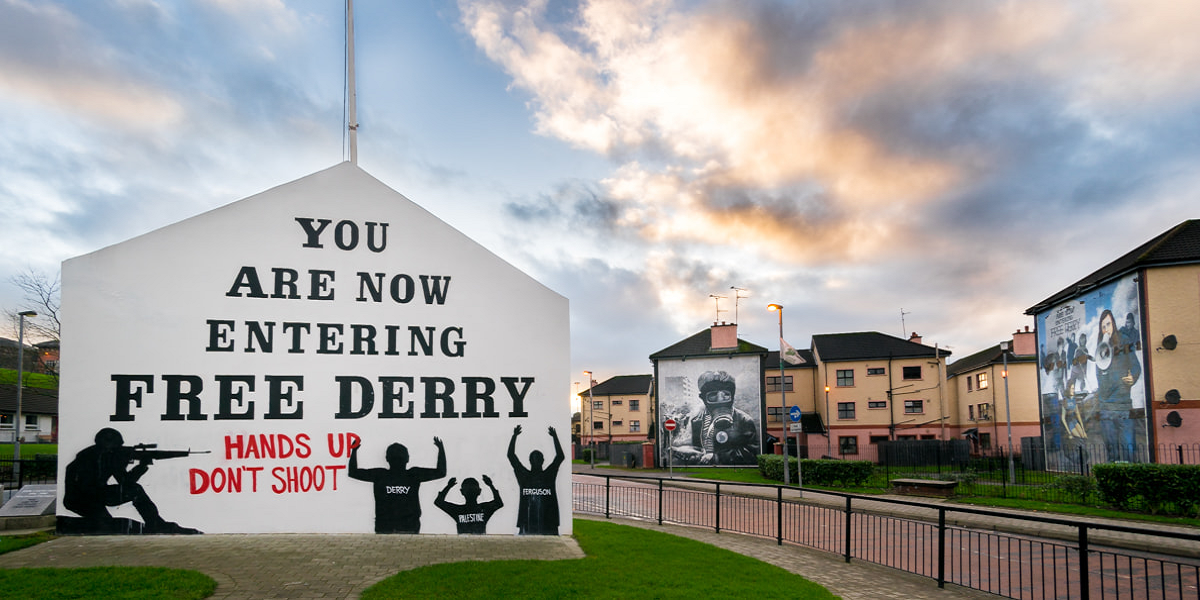 What was so dangerous to the establishment about the situation in the North of Ireland in the early 1970s was that a sizable enough group of people had come to the collective conclusion that the state as it stood had neither the right nor the capacity to rule them – and that these people had set about learning and deploying the means of centring power in their own communities. And yes, this manifested itself in the violence of the republican armed groups but it was the multi-headed nature of this resistance that was a thing to behold – the civil rights movement, the precariously liberated areas of Belfast and Derry, the rent and rates strikes, the underground news sheets, radio stations, insurgent MPs, the self-educating, the mass mobilisations, the sit-ins, sit-downs, barricades. Pandora’s box had been cracked and a hydra had squeezed through.

Lieutenant Colonel Derek Wilford was commander of 1 Para in the North of Ireland in 1972. 1 Para did the killing on Bloody Sunday. In 1992, the journalist Peter Taylor put it to Wilford of Bloody Sunday, ‘But you don’t sign your death warrant by taking part in a demonstration?’ Wilford replied, ‘Some people do’.

Some people do. Poor people do. The poor who break the law. And when things change, as they do every day of every year, somewhere in the world, sometimes imperceptibly, other times intensely, blindingly, it is usually because of the courage and determination of the poor.

Nobody who marched on Bloody Sunday expected to die, but they knew they were defying authority. Those who were slaughtered had unwittingly decided that their last act would be one of solidarity, of putting themselves on the line for their imprisoned neighbours. Those who were shot that day but survived, like Peggy Deery, would deal with the fallout for the rest of their lives while enduring the same army raiding their homes, arresting their kids. Many who were there would spend the rest of their lives challenging repression and discrimination. Some are still at it. The outworking of the bitter memory has been incurable pain but also renewed courage and a determination to go on.

So Jackie Duddy, Patrick Doherty, Hugh Gilmore, Barney McGuigan, Jim Wray, Michael Kelly, William McKinney, Gerard McKinney, Kevin McElhinney, John Young, Gerald Donaghey, William Nash, Michael McDaid and John Johnston are innocent. No gunmen they. Not a soul who has witnessed how the British government operates in its first and last colony ever thought otherwise. Whatever our betters said about it.

But what have we left to learn? I’m not sure. Not nothing though. Maybe it’s that when there are things happening to us, mammoth things, tiny things, things that seem inconsequential when viewed from a great height, monstrous things, well-heeled people telling you how to subsist and keep out of the way, impositions of poverty that seem beyond our control, matters like a world burning and refugees drowning that speak to our very integrity and survival, there are risks worth taking in response.

Pádraig Ó Meiscill is a writer from Belfast.