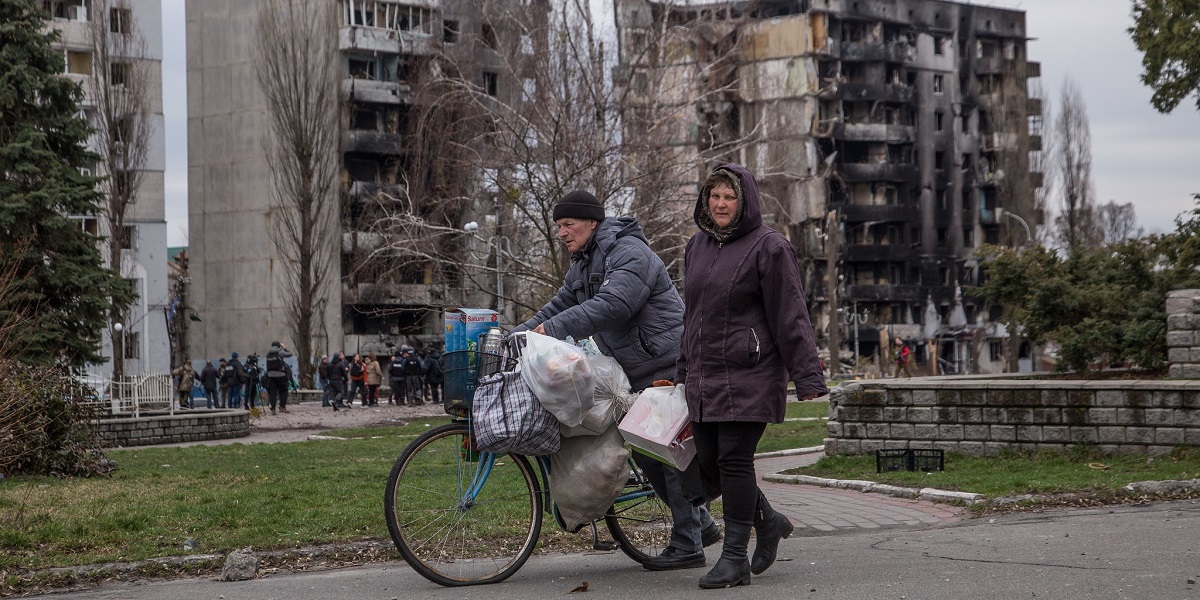 Putin’s war on Ukraine has led to thousands of deaths, upended the world order, and intensified the global energy crisis. At home in Britain, it has led to an outpouring of support for Ukrainian refugees – if not for black and brown people fleeing war and persecution – and provided cover for Keir Starmer to further crack down on the Left of Labour, from socialist MPs to Young Labour.

In this extract of an interview from the latest Momentum political education bulletin, The Educator, David Wearing discusses the geopolitical interests at stake, the reactions of Western states, especially the UK, and how the Left in Britain can meaningfully engage in anti-imperialist struggle today.

Momentum: Russia’s invasion of Ukraine has caused untold devastation and loss of life. Evidence of fresh atrocities seem to emerge almost daily. Why has Vladimir Putin’s regime launched this war of aggression, in your opinion?

David Wearing: There’s a standard imperialist mentality at work. Moscow evidently regards Ukraine with a strong sense of entitlement; part of its sphere of influence in the same way that the United States has historically treated Latin America as its ‘backyard’ under the so-called ‘Monroe Doctrine‘, and sought to dominate the Middle East more recently. Reasserting substantive control over Russia’s near abroad has been an overriding strategic priority for Moscow since the mid-1990s at least.

Indeed, the guiding principle across two decades of Putin’s presidency has essentially been ‘Make Russia Great Again‘. His revanchist, authoritarian nationalism is a product of the 1990s, when Moscow lost its grip on many of its former Tsarist and Soviet possessions in Eastern Europe and Central Asia, and when the Russian economy imploded under neoliberal shock therapy. The ugly machismo of Putin’s rule is a backlash against all of this.

Then we get into the specifics of Ukraine, a huge strategic asset for both the Tsars and the Soviets when it was under their imperial yoke, before independence in 1991. It boasts some key industrial centres, an enormous agricultural capacity, and the naval port in Sevastopol allows Moscow to project military power through the Black Sea and beyond. Take all that into account, and any prospect of Ukraine leaving the Russian orbit to join the EU and NATO will clearly constitute a massive geopolitical loss as far as the Kremlin is concerned.

So the imperial logic is obvious, but it hardly adds up to a justification for war. Certainly not one you can sell to the Russian public as good reason to sacrifice their sons and daughters on the battlefield. Hence the various pretexts for the invasion that Putin has offered in terms of defending the Russian-speaking population in eastern Ukraine. We don’t need to detain ourselves with any of that. Every imperial aggressor throughout history has claimed to be acting on some noble, virtuous principle.

Aside from geopolitical motives, there’s been a palpable sense of hubris from Putin following previous military victories in Chechnya, Georgia, Crimea and Syria. But this war has proved a major miscalculation, and the danger now is that — like the US in Vietnam and Afghanistan – he digs in for the long term rather than suffer the humiliation of accepting defeat. Given the sheer viciousness of the Russian campaign so far, this is not something that the people of Ukraine can afford.

Every imperial aggressor throughout history has claimed to be acting on some noble, virtuous principle.

M: Clearly, responsibility for this heinous violence lies first and foremost with Putin and the Russian state. But it’s also worth asking what role, in the long-term, has NATO played in getting us to this point? And how should we relate to it going forward?

DW: There’s been a debate within the US foreign policy establishment about the wisdom of expanding NATO going back over a quarter of a century. One side (the old conservatives and Cold War veterans) argued that expanding the alliance too far into Russia’s former sphere of influence would raise tensions between Washington and Moscow to a dangerous degree. The other side (the neo-liberals and neo-conservatives of the post-Cold War era) argued that Washington’s interests lay in opening the alliance up to any state that wanted to join. At least initially, it was the latter group that got their way.

This is a debate among imperialists about the best policy for Washington to adopt versus Moscow in its own imperial interests. So it’s been a little odd to see the anti-expansionist position in that debate being portrayed in recent weeks as ‘pro-Moscow’. Take the US diplomat George Kennan, who argued in 1997 that ‘expanding NATO would be the most fateful error of American policy in the entire post-cold-war era’, which would ‘inflame the nationalistic, anti-Western and militaristic tendencies in Russian opinion [and] restore the atmosphere of the cold war to East-West relations’. Back in the 1940s, Kennan had been one of the key intellectual architects of Washington’s entire Cold War strategy toward the USSR. It’s a sign of the depths to which the current debate has degenerated that even the sort of analysis offered by people like him is now routinely denounced as apologia for Putin.

For myself, I can see some logic in the arguments made by these old conservatives of the US foreign policy establishment. Clearly they are attempting to explain, rather than excuse, their imperial adversary’s response to the expansion of NATO. And clearly some of their predictions have come true.

Imperialists may see control over neighbouring countries as a matter of security, even ‘defence’, but the rest of us don’t have to indulge that

However, as socialist anti-imperialists we have our own language and frames of reference which are much more analytically useful than some of the shoddy euphemisms of the grand strategists. For example, we should dispense with talk of Russia’s ‘security concerns’ as a ‘great power’, and instead refer more frankly and accurately to Russia’s imperial ambitions in places like Ukraine. The term ‘security’ is one that mostly has an obfuscatory effect in political discourse. Imperialists may see control over neighbouring countries as a matter of security, even ‘defence’, but the rest of us don’t have to indulge that.

We also need to think beyond how imperial powers should best manage competition over their respective spheres of interest. A better question for us might be, how can West, Central and Eastern Europe, including Russia, be made into a common home rather than a geopolitical battleground? This is likely a question for a post-Putin world, but we should start thinking about it now. If we’re lucky enough at some point in the future to enjoy another historical moment of détente between the West and Russia, and another interlocutor in Moscow like Mikhail Gorbachev, then we should seize that moment to build a durable peace, rather than squander it a second time.

M: So that’s the Western meta-narrative around the confrontation with Russia. What about the West’s approach to the Ukraine war itself?

DW: The fact that the Western powers find themselves on the right side of the Ukraine war is a reflection of imperial interests and expediency not some high moral principle. They perceive a clear geopolitical advantage to be gained either from a Ukrainian victory or at least a Russian military failure. Support comes in the form of arms supplies to Ukraine and sanctions against Moscow, but a no-fly zone or some other direct intervention has thankfully been ruled out so far, due to the entirely rational fear that this would trigger World War Three.

There’s been no groundswell of opposition to this from the left, and rightly so. Ukraine has no option but to defend itself militarily, it has the right to do so, and it has the right to seek the means of self-defence from the only sources credibly able to provide it, namely Russia’s Western adversaries. None of this is complicated and most of us understand it.

But given the nature of Western power we are understandably wary. We are wary of sanctions having a devastating effect on the Russian population, and without seriously hurting the regime. We are wary of any escalation into a direct NATO-Russia war, which would be utterly catastrophic. And we are deeply concerned about a new age of militaristic rivalry between an Atlantic bloc and a Eurasian bloc, fueled by nationalistic chauvinism on both sides. We need to be ready to push back hard on all of these dangers.

Already in the past few weeks we’ve seen US President Biden announce huge additional spending on nuclear weapons. Experts have long warned that upgrading and renewing nuclear arsenals makes the world less, nor more safe. We can expect a serious rise in military spending in the UK, and in Germany as well, where decades of foreign policy have been torn up. It’s really important that we stand by our anti-militarist principles in this moment. That doesn’t mean an absolutist form of pacifism, but it does mean an insistence that people recognise that arms races inflame rather than guard against the danger of military conflict.

Finally, in the prevailing atmosphere of machismo, we need to ensure people don’t forget the non-military, humanitarian dimension. That means demanding swift and safe paths to entry for Ukrainian refugees (as part of our wider demand for a complete change in UK border policy). It means aid for displaced Ukrainians wherever they might be. And it means any other economic measures that might help, such as cancelling Ukraine’s national debt to support its recovery whenever the war finally ends.

This is an extract of an interview from the latest Momentum political education bulletin, The Educator. Read the complete interview and subscribe here.