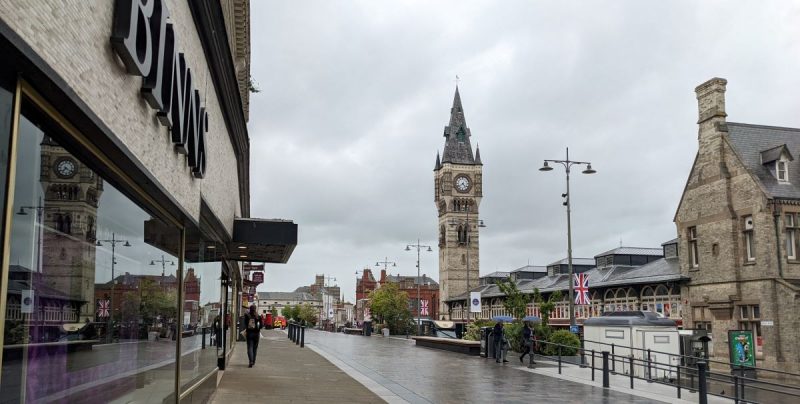 Darlington was one of the so-called ‘Red Wall’ seats taken by the Conservatives in the 2019 General Election. Photo by Gerry Hart

Every few years, a political term emerges which raises the ear of every pundit across Britain. One of the most recent of these terms has been the ‘Red Wall’, created in the build-up to, and aftermath of, the 2019 General Election as dozens of Labour’s former northern strongholds abandoned the party. As a geographic term, it simply refers to this band of constituencies across the North. However, the Red Wall has also become shorthand for Britain’s provincial working class. Few political controversies since 2019 have gone by without some pundit tweeting ‘what will the Red Wall think of this?’

It is important to understand the Red Wall as more than some objectively true, material fact about voters in the North of England. Instead, it must be understood as what it now is – a political narrative. In this regard, the Red Wall is used to justify socio-economic inequality across Britain, on the pretence of appealing to some political common sense reflective of the public will. Essentially, the Red Wall is simply another overused establishment excuse for perpetuating inequality, a la ‘balancing the budget’ or ‘taking the centre-ground’. These narratives seek to reinforce political choices which worsen the socio-economic conditions for the most vulnerable in our society.

A prime example of just how this Red Wall narrative reinforces inequality has been the approach to the ongoing cost of living crisis. As the Labour Party desperately attempts to distance itself from the progressive impulses of Corbynism, as other parties struggle to make headway in a changing political landscape, and as the Conservatives kick the can down the road, conversations around nationalisation, public ownership, tax rises on the wealthiest and more have become taboo once again. Labour Party leader Keir Starmer’s dithering over common versus public ownership represents this well – while showing how this political narrative has outgrown the Red Wall’s original definitional boundaries.

That politicians like Starmer feel obligated to appeal to this narrative means they are incapable of dealing with a situation where up to 40 per cent of Britons could face fuel poverty this winter. They are incapable of dealing with a circumstance where up to 500,000 children could be pushed into poverty. Trapped by the rhetorical constraints of the red wall, the political class is firmly locked out of effectively dealing with the present economic crisis at hand, and millions of vulnerable Britons will pay the price.

Tearing down the Red Wall

In some ways, the perception of provincial, deindustrialised communities being more socially conservative on these matters demonstrates how such impulses are cultivated. This perception is consistently wrong, yet it still underpins the justification yesterday’s figures like Tony Blair give for their bigotry. Importantly, this lets us understand that the battle against transphobia, racism, and all structural social inequality, cannot be treated as a regional issue. These are interlinked, not isolated, and must be combatted at a higher, more structural, level.

The Red Wall narrative ultimately serves to guide the country in an increasingly conservative socio-economic direction. It seeks to defend the pre-existing conditions of inequality while creating the conditions for new vulnerabilities that millions will face. It is a narrative that can, and must, be challenged. Childhood poverty, fuel poverty, transphobia, racism, sexism, and every other kind of structural and personal pain, are not mere facts of life. They are conditions which can be resisted and overcome. The grassroots activism of thousands coming out to demand a total ban on conversion therapy shows this. The organising of those opposed to the cost of living crisis, and the inadequate measures offered up to manage it, show this. They show that we too can forge our political narrative – one of progress and of care. They show that it is not tenable to wait around on politicians subservient to a political and economic system which necessitates such narratives as the Red Wall to justify its cruelty. This requires a realisation that a large part of what upholds inequality are narratives, and that these narratives are malleable and we can change them.

Daniel Eales is an activist in the Northwest of England with a focus on ecology, political organising and political education