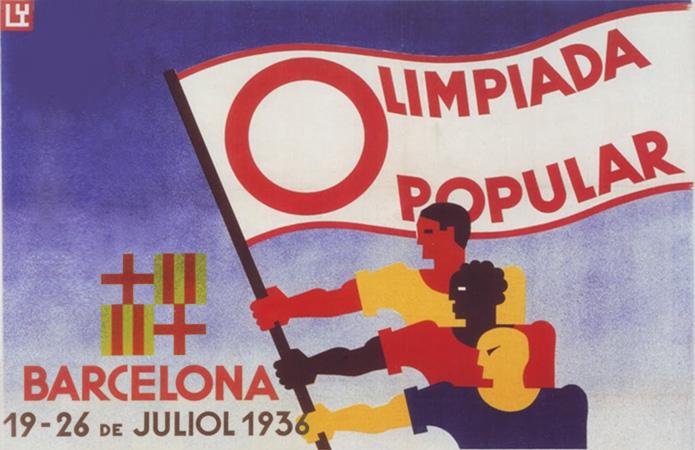 Promotional image for the 1936 People’s Olympiad

Hitler’s 1936 Olympics were, in many ways, the first truly modern Games and set the tone for subsequent iterations: infrastructure as national pride, the inception of the torch relay and the first to be televised (by Leni Riefenstahl). Boycott campaigns largely failed and the games were successful for Hitler and Nazi Germany, overwhelmingly so in terms of gold medals, Jesse Owens notwithstanding.

Yet there had been a major attempt to steal Berlin’s thunder: the People’s Olympiad, scheduled to start a week earlier in Barcelona, under the newly elected Leftist Front of Catalunya. But for the outbreak of the Spanish Civil War, it might have been an antifascist triumph and a major chapter in the convergence of organised labour and organised sport.

Organised sport, during most of the 19th century, was regarded as an upper-class and bourgeois activity that followed traditional and conservative values. Working- class people found themselves alienated from sporting activities and especially from organised sport and competitions. However, the turn of the century saw a change in the sporting world with numerous organisations founded and exclusively integrated by workers across Europe, North and South America, and Asia. Organisations such as the Socialist Gymnastics Union or the Workers’ Hiking Association were a safe haven for the workers, who were able to practice their preferred sports with a community that understood a common hardship.

After thwarted attempts in 1913, representatives of proletarian sport organisations in Germany, England, Belgium, France and Austria met in Lucerne in 1920 to create an international association. The International Association for Sport and Physical Culture, also known as Lucerne Sport International (LSI), was founded. Though the meeting and organisation had been endorsed by the Bureau of the Socialist International, ‘Socialist’ was initially not added to the name because French representatives feared that non-socialist workers would not join the organisation if the word was included. Even so, the founders of the organisation claimed that the workers’ sport movement was an important actor in the fight against capitalist nationalism and militarism.

In 1921, differences between socialists and communists inside the LSI became too intense, and the International Association of Red Sports and Gymnastics Associations, known as Sportintern, was created in the Soviet Union. It included an executive committee formed by representatives of the USSR, France, Germany, Czechoslovakia, Sweden, Italy and Alsace-Lorraine. The Sportinern was a fully communist workers’ sport organisation, and it did not shy away from officially and publicly demonstrating the organisation’s ideology.

Nonetheless, it was the LSI that organised the first International Workers’ Olympiad in 1925 and then intermittently until 1937. A socialist alternative to the bourgeois traditional Olympics, the Workers’ Olympiad sought to unite nations instead of pitting them against each other. No national flags were raised, only the red flag of socialism and communism. More than 150,000 people and participants from 12 different nations attended the first winter and summer Workers’ Olympiad. This was surpassed in the second Olympiad of 1931, with 250,000 spectators attending the games. Women were encouraged to compete, and in the first Olympiad, the world record in the women’s 100 metre relay was broken.

In 1926, the LSI officially changed its name to Socialist Workers’ Sport International (SWSI), but tensions with the Sportintern remained high, and both organisations barred the other from participating in their competitions. In 1928, the Sportintern created the Spartakiad, an international competition for communist workers sponsored by the Soviet Union. The Spartakiad was not created in opposition to the LSI Olympiad, but it was emphasised as a communist competition, instead of simply a workers’ competition.

On 26 April 1931, Berlin won the bid against Barcelona to host the Olympics. When the time came to host the games, in the summer of 1936, Hitler’s power was fully established in Germany, under the rule of the Nazi party.

A campaign against Hitler’s Olympiad was started by the Sportintern. After the February 1936 electoral victory of the Leftist Front of Catalunya, Barcelona was chosen as the home of the anti-fascist version of the Olympic games. The Comitè Català pro Esport Popular or CCEP (Catalan Committee in Favour of Popular Sport) was appointed with the task of organising the parallel games in the Catalan capital city.

Although the games were envisioned by the Sportintern, Andrés Martín, one of the organisers, stated: ‘The reactionary press knowingly lies when they claim this is a “Red Olympiad”. It’s a People’s Olympiad: by the people, for the people.’ Organised to take place from 22-26 July, the response from anti fascists around the world was so enthusiastic that the starting date had to be advanced by three days.

According to a document issued by the British Workers’ Sports Association, the games were expected to attract 20,000 participants from 17 nations, including exiles from both Nazi Germany and fascist Italy. A Jewish team was specially created, and Spain was represented by a national team, alongside teams from Catalonia, the Basque Country, and Galicia. Women were urged to participate, with the organising committee issuing a press release stating that ‘the picture of the People’s Olympiad would not be complete if women did not take her [sic] due place in it’.

Athletes had to be sponsored by trade unions or workers’ organisations, and press statements were released to raise funds for the participants. Governments generally did not want to be involved because their countries were officially in the Berlin Olympiad. The French Government, ruled by the People’s Front, however, sent half a million francs to the French delegation, offering official support and sponsorship to its participants.

Sadly, the People’s Olympiad never saw the light of day.

On 18 July 1936, as thousands of athletes from around the world were arriving in Barcelona for the next day’s games, a coup d’état was carried out by conservative and fascist Spanish forces. The games were cancelled, and almost all athletes who had managed to arrive were sent home. Around 200 foreigners, including athletes, their representatives and spectators, decided to stay and fight alongside the Catalan and Spanish people, joining the International Brigades later on.

The People’s Olympiad of 1936 and its LSI predecessors demonstrate that sport is much more than a physical activity. It has been used to fight oppression and bring oppressed communities together. Most modern sports were not created by the working class but they were adopted and improved by them. Football would not be the phenomenon that it is without the working class. And although corporations might suck the soul out of sports, we must remember that it is the workers that are the soul of the sporting movement.

Uma Arruga i López is an MA student in international war studies in Germany.