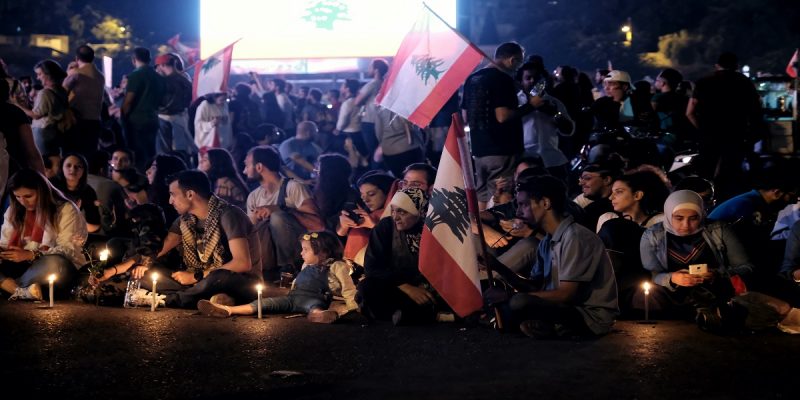 On 17 October 2019, the Lebanese cabinet met amid a rapidly deteriorating financial situation and catastrophic wildfires ravaging the country. During that now-infamous meeting, the government decided to impose a number of new fiscal measures, including a tax on WhatsApp and other internet-based calls. When news broke, it ignited an unprecedented uprising that changed the country and marked the start of a still-unfolding revolutionary process.

Echoing the mass movements of the 2011 Arab uprisings, the people in Lebanon demanded the downfall of the regime. However, protesters were not just calling for the toppling of a dictator, as in other Arab countries, but demanding the dismantling of the entire neoliberal regime and its use of sectarianism to co-opt and repress progressive political movements.

As the new taxes were announced, protesters mobilised first in Beirut, blocking roads with burning tyres. The movement quickly spread across the country, with thousands united in anger against the government and the whole ruling class. Within hours, the country was paralysed by protesters blocking roads and declaring the start of a revolution.

Mass mobilisations are not new to Lebanon. In 2012, public sector workers and private school teachers mobilised through the Union Coordination Committee, as did thousands who protested in 2015 during the garbage crisis, when the government failed to find a waste management solution after the closure of the Na’ameh landfill. October 2019, however, was different in scale, scope, and composition. Unlike movements preceding the end of the 1990 civil war, the October uprising mobilised huge numbers of people in all regions around the country simultaneously. At one point there were an estimated two million protesting out of a population of 4.8 million.

This was not made up of the usual middle-class activists and their circles; nor was it only a mobilisation of workers and civil servants. For the first time in post-war Lebanon, opposition to the regime brought together poor, working- and middle-class sections of society, including many from the usual constituencies of the sectarian political parties that rule the country. In a clear turn against the traditional leaders, the October uprising declared its rejection of a political system governed by sectarian clientelism, sustained by the absence of state welfare or equitable distribution of wealth.

The uprising opened a new political chapter in which politics could no longer be discussed without acknowledging the existence of a significant section of society opposed to the ruling elite. While the first wave of the Arab uprisings emerged in autocratic countries where the regimes were embodied by the figures of individual dictators, the political system in Lebanon is multiheaded and known as a sectarian ‘consociational democracy’, despite a clear lack of democracy.

In lumping all politicians together under the slogan ‘Kellon Ya’ne Kellon’ (All Means All), Lebanese protesters were expressing a rejection of the whole regime and ruling elites. In addition, the uprising focused heavily on attacking the country’s central bank and the private banking sector. By mobilising against both politicians and bankers, the movement actively opposed a neoliberal sectarian system dividing people by identity in order to rule over them.

By the beginning of 2020, the Lebanese government was admitting that a fifth of the population were living in extreme poverty (defined as surviving on less than $4 per day), having more than doubled in a year. World Bank and other estimates warned that this could reach 40- 70 per cent unless a solution was found to the financial crisis. For the regime, this required heightened police and army repression, alongside militia thug violence, to clamp down on the demonstrations. Together with protest fatigue and unclear strategic vision, this had the desired effect. And while the absence of a defined leadership was a source of strength at the outset, enabling the widest possible range of people to get behind the movement, the absence of organisation and political vision – as well as the rejection of emerging ones – eventually played a detrimental role.

The material conditions for strong opposition with a clear leadership did not exist because Lebanon has witnessed more than three decades of decline in the required structures and organisations of civil society. There has also been a systematic weakening of labour organisations and unions, in addition to a steep fall in membership of most leftist parties and political movements. Under such circumstances, there were no groups that could act as the scaffold of the revolution and lead the political transition wished for by the masses.

In this context, as economic crises further deepened towards fully-fledged financial collapse – with the currency’s value falling and inflation growing exponentially – the revolution entered a phase of retreat in early 2020. A new technocratic government was formed by the ruling elites. While some read the absence of key former regime figures as a victory, others argued that it was no more than a puppet in the hands of the same old ruling lords.

Covid-19 reached Lebanon by the end of February 2020. Against the backdrop of declining street politics and revolutionary groups still repositioning themselves, a lockdown was imposed. Capitalising on the opportunity, the government rushed to put an end to the sit-ins and remove the tents that had filled squares across the country. Under the pretext of the pandemic, the security state stepped up its crackdown on activists and journalists.

Ultimately, as casual/informal workers could not afford to stay at home in the absence of government support, lockdown became an impossibility. Little by little, the economic situation overshadowed the pandemic, and people returned to the streets, protesting about their dire conditions. The huge social transformations caused by currency devaluation and hyperinflation shifted class relations at dramatic speed. A large section of the middle classes found themselves in poverty. There were fears that an actual famine was looming.

On 4 August 2020, with people in Lebanon already exhausted by poverty, lack of electricity and water, and shortages of fuel and wheat, large areas of central Beirut were torn apart when a huge quantity of ammonium nitrate exploded in a port warehouse.

Almost a third of Lebanon’s capital was demolished in one of the largest explosions in recent history. More than 200 people died, 6,000 were injured and around 300,000 displaced. The post-explosion period witnessed a major mobilisation on 8 August and yet again protesters were met with intense state repression. Since then, smaller sporadic protests have taken place, but the effervescence and the huge crowds of 2019 are no longer there.

In a clear shift from the hopeful and peaceful protests of 2019, the political mood in the explosion’s aftermath is infused with anger and despair. Today the walls of Beirut are full of graffiti declaring, ‘We don’t want accountability, we will take our revenge’. While the first anniversary of the revolution mobilised no more than a few thousand around the country, violent clashes and armed looting have become commonplace. At this crossroads in the history of Lebanon, Gramsci’s words have never sounded so prescient: ‘The crisis consists precisely in the fact that the old is dying and the new cannot be born; in this interregnum a great variety of morbid symptoms appear.’ It remains to be seen whether Lebanon’s uprising will follow similar patterns witnessed across the region since the Arab uprisings of 2011, or whether the sectarian consociational nature of its regime will yield a new plethora of ‘morbid symptoms’.

Rima Majed is an assistant professor of sociology at the American University of Beirut. This article originally appeared in Issue #230, published December 2020