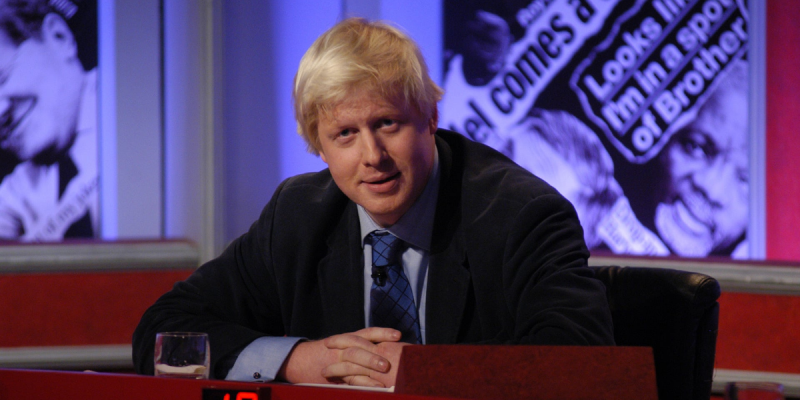 Satirical panel shows like Have I Got News For You were pivotal in helping Boris Johnson to craft his public image (Photo: BBC)

For better or worse, the election of Sir Keir Starmer QC as Labour leader has been seen in some quarters as a return to political ‘normality’, which will likely provide comfort to Britain’s satirists. This might sound strange, given that their role is supposedly to mock the powerful. But in truth, they never truly worked out how to deal with Jeremy Corbyn’s leadership or the type of politics it represented, mainly due to their inability to see how they had been co-opted into the British establishment.

During the 1990s and especially in the New Labour years, standup comedy became a lucrative industry. Its entry level remained a circuit of small pubs and clubs but its peak became a variety of ready formatted BBC panel shows such as Have I Got News for You and Mock the Week, and then Live at the Apollo, which offered fame, fortune and an audience of millions. Some panel shows put comedians alongside journalists and past or present MPs, and allowed them to directly air their political opinions in an unprecedented way, even if not all proved willing to make their allegiances as clear as leftwing comics such as Alexei Sayle or Ben Elton had in the 1980s.

In part, this was because Tony Blair was open about seeing New Labour as a softer continuation of Thatcherism – something Thatcher called ‘her greatest achievement’. This allowed comedians to position themselves to the left of mainstream politics without having to do much more than bemoan that ‘they’re all the same’, and to present themselves as being more principled than ‘career politicians’ without having to clarify their own principles, let alone live by them. The new money also made it far easier to ‘sell out’ – and the new comedy industry’s gatekeepers tended to reward those who didn’t lean towards oppositional politics to start with.

While it was only with Corbyn’s ascent that this mask truly slipped, mainstream comedy had been gradually de-radicalised over the previous two decades. In the late 1980s and early 1990s, one could see Spitting Image end with a song titled ‘Kill an Estate Agent Today’, or ‘national treasures’ Fry and Laurie’s parody of It’s a Wonderful Life in which the guardian angel sees a world without Rupert Murdoch and then shoves Murdoch off the bridge for the sake of humanity.

It’s hard to pinpoint exactly when such iconoclastic opinions disappeared from British screens, but the end of the Channel 4 series The Mark Thomas (Comedy) Product in 2003 felt like a watershed moment. It wasn’t just that Thomas set himself up clearly against the Major and Blair governments but also that his mixture of stand-up and campaigning allowed him to articulate a point of view in greater detail than on panel shows, and gave his comedy more power than if he were sneering from the sidelines.

Whose Side Were They On?

Instead of questioning the policing of dissent during the ‘war on terror’, many of Thomas’ contemporaries spent the 2000s railing against ‘political correctness’, amplifying conservative attack lines against anti-racist, anti-feminist and anti-homophobic activism, and helping them to claim the defence of ‘free speech’ for the reactionary right. Stewart Lee revived his career by challenging this with considerable insight and wit, but, like Thomas, found the panel shows unamenable to breaking the consensus. As the New Labour project faded into the Conservative-Lib Dem government, Stewart Lee’s Comedy Vehicle became one of the few bright lights in televised humour. He focused his anger more on the cruelty of ‘anti-PC’ comedians than that of the coalition government, but remained aware that both David Cameron and Jimmy Carr were equally guilty of punching down at the poor – and of not paying their taxes.

Yet even Lee eventually aligned himself with liberals who blamed Corbyn for the EU referendum result and consequent Brexit – few of whom stopped to think about how the split it caused in Labour’s vote required careful management, let alone how the EU handled the Greek debt crisis. He named pro-EU heroes Ken Clarke and Jess Phillips alongside Gina Miller and Adbusters copyists Led By Donkeys in his ‘stars of track and field’ for 2019.

Comics presented themselves as more principled than politicians without having to clarify their own principles, let alone live by them

Lee’s sometime guest on Comedy Vehicle, Armando Iannucci, wrote The Thick of It, the defining satire of the PR-led politics central to New Labour and, later, the coalition, which ran on BBC 4 and then on BBC 2 from 2005 to 2012. At the time, it was hard to tell if we were invited to disdain the whole type of politics presented in the series – which never differentiated between parties, and whose characters seldom discussed policies as life-or-death issues – or simply to empathise with Malcolm Tucker’s frustration at how bad his underlings were at playing the media.

Knowing the spin doctor was based on him, Alastair Campbell questioned Iannucci’s anti-establishment credentials via Twitter when Iannucci accepted an OBE in 2012. ‘Three little letters can have more impact than you realise,’ said Campbell – to which Iannucci replied, with lightning wit, ‘WMD’. Seven years later, Campbell was expelled from Labour after encouraging people to vote Liberal Democrat in the European elections – and Iannucci, who backed the Lib Dems in 2010, retweeted right-wing Labour MPs supporting Campbell, along with a snarky tweet asking if Corbyn had voted for the far-right Brexit Party.

The Comedic Centre Could Not Hold

The Thick of It’s central proposition – that both major parties were essentially the same – wore thin as Cameron and Osborne’s cuts became harsher. It collapsed when Corbyn assumed the Labour leadership on an anti-austerity platform. Suddenly, the ‘both sides’ framing British comedians had often used no longer rang true, instead implicitly siding them with power. 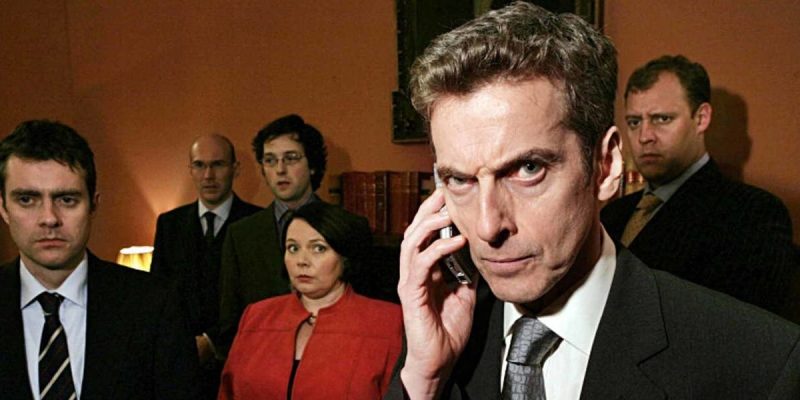 Armando Iannucci’s ‘The Thick of It’ typified political satire during the New Labour and early Coalition governments (Photo: BBC)

Charlie Brooker, who had long cast himself on Screenwipe as an angry outsider, alone on his sofa venting his frustrations about politics and its mediation, did a typically cynical vignette on his 2016 end-of-year show on Corbyn’s argument with Richard Branson over whether seats were available on a Virgin train. Coming right after a gag about Corbyn failing to ‘recognise’ anti-Semitism, with no mention of his record of standing up for Jewish and anti-fascist causes, Brooker spent far more time attacking Corbyn than Branson. He did so with no consideration of why Branson might cast doubt on Corbyn’s story, nor why Sky News would side with Branson, let alone giving any idea of why his willingness to confront corporate interests appealed enough to Labour’s members for them to re-elect him by a landslide that summer. Brooker’s sister-in-law, incidentally, is a Labour MP who supported Owen Smith in that leadership contest.

Another trend that made it harder for satirists to land meaningful blows on the Labour leader was that the media attacked Corbyn from every possible angle, often in mutually contradictory ways, making it almost impossible for comedians to differentiate themselves from the establishment. The only way for them to do so would have been to come from an anarchist or communist position, but this required more work than saying ‘I’m actually to the left of Corbyn, but…’ And as they would have known if they had ever held such political convictions, they would not have been given much space to articulate them on the panel shows, and it was unlikely that they would be invited to expand on them on Live at the Apollo.

Comedians have struggled with Twitter for a while – few can meet the inevitable pressure of being witty all the time, and some are surprisingly thin-skinned when criticised. But in recent years, they and the weekly panel shows they front have been made to look redundant. Not so much by Corbyn himself – whose bone-dry, self-deprecating humour was never seen enough in his television appearances – but by a fast-paced, collaborative humour that revelled in the apparent collapse of the political order after 2015, the year not just of the hysterical media reaction to Corbyn’s leadership but also the ‘Edstone’ and #piggate.

This Twitter comedy was often niche, heavy on in-jokes that relied on a shared political position, usually rendering its opponents’ arguments only slightly more absurd, or seeking to embarrass those opponents. Its crowning achievement was probably during the 2019 election, when left-wing Twitter users made up an absurd but just-about-believable story about Liberal Democrat leader Jo Swinson killing squirrels, which got shared so widely that Swinson had to deny it on LBC. A clampdown on Twitter ‘shitposters’ followed, which lasted until the end of the campaign.

Mainstream comedy came out of the last election very badly. Russell Howard, with a net worth of £5 million, told his audience that Corbyn and Boris Johnson were politically indistinguishable. Have I Got News for You – and the satirical paper Private Eye, edited by regular HIGNFY panellist Ian Hislop – blamed Corbyn for Johnson’s victory without taking responsibility for helping Johnson establish his ‘harmless clown’ persona through repeated appearances on the programme.

In this sense, Johnson stands alongside Donald Trump, Jair Bolsonaro and Volodymyr Zelensky as right-wing populists who built up a supportive base through mass entertainment. Like them, Johnson is impervious to satire – he doesn’t care how he comes across to ‘respectable’ people. Starmer clearly does and is better at presentational politics than Owen Smith (whose campaign he supported) but it’s too late to save centrism, and too late for comedy.

Satirists can mock Starmer all they want, and they will doubtless continue to find an audience. But just as Starmer will not be able to restore ‘normality’ to British politics in a time of constant flux, nor will mainstream comedians be able to pretend that they didn’t respond to Corbyn’s challenge to the status quo with the same sneering hostility as the Murdoch press, the Blairite establishment or the Conservative government. Whatever their response to the end of ‘the Corbyn project’, it will be gutless, mirthless and ultimately worthless.

Juliet Jacques is a writer, filmmaker and host of the political arts podcast Suite (212). Her most recent book is Trans: A Memoir (2015). This article is from our Climate Revolutions Summer 2020 issue – out now! Subscribe here