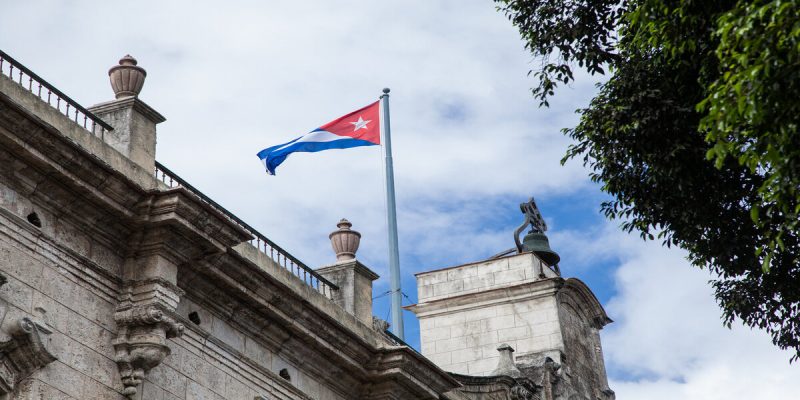 After the largest protests on the island since 1959, the Cuban government took what, for some, has been long-awaited steps to further liberalise the economy. The Cuban Communist Party has now announced that private enterprises with up to 100 employees will be permitted for the first time.

For some, this is proof that Cuba’s reactionary critics are finally cutting through. While leftists are rightly suspicious of any creep towards a free market system, the Cuban economy has suffered heavily throughout the Covid-19 pandemic and basic goods have become increasingly scarce throughout 2021.

Of course the US embargo continues to sow ‘economic dissatisfaction and hardship’ on the Cuban people, just as it was designed to do. The final days of the Trump Presidency even saw the embargo tightened, with Cuba re-designated as a ‘state sponsor of terrorism’.

On 11 July, after months of smaller outbursts and bubbling frustrations, huge protests erupted across the island. Windows were smashed, shops looted and cars overturned. Some marched against the regime while some marched in support of it. As of 11 August, a crowdsourced list has 809 people still missing and there has been at least one death.

Quick to paint the unrest as an expression of opposition to the Cuban Communist Party rule, media coverage became a hall of mirrors. The press misrepresented images to point the finger almost exclusively at the Cuban regime, oversimplifying what is a complicated and heterogeneous movement.

Joe Biden – eager to play the strong man – rose to the occasion, announcing sanctions against the Cuban police force and promising more action in the days and weeks ahead.

A narrative began to surface. For Cuba, the choice was simple: capitalism or bust.

Cuba and the international left

In the wake of the protests, supporters of the revolution spoke out against the brutality of the embargo, condemning imperialist overtures made by the Biden administration. Writing for Jacobin, Ben Burgis argues that the domestic shortages of goods were the direct result of the US embargo. Helen Yaffe echoes this, highlighting Cuba’s inability to import medical goods throughout the pandemic and contextualising the scarcity of goods alongside the government’s decision to prioritise the welfare of the people.

They’re right. Mostly absent from their accounts, however, is any mention of the brutal repression and state violence carried out by the government against its own people in the wake of the protests. With rolling internet blackouts and state control of the press, exact figures are hard to come by. One journalist tells of being brutally detained for 11 hours at the hands of the police, influential artists and opposition leaders remain missing and families searching for their children are kept in the dark.

For Cubans, the authoritarian tendencies of the state apparatus are nothing new. Government crackdowns against human rights defenders, journalists, trade unionists and government critics have been commonplace throughout Cuba since Fidel Castro’s rule began – notably during the so-called Black Spring when 75 dissidents were imprisoned and later exiled.

In defence of los logros

It is important to remember the huge achievements – often referred to as los logros – made over the past half century by Cuba’s revolutionary government. In the face of embargo, Cuba still ranks higher than other ex-Comecon countries in terms of life expectancy, infant mortality and, pre-pandemic, experienced GDP per head higher than the average for ex-transition economies. The revolutionary government has taken the island from the widespread poverty of its colonial past to near universal literacy.

Cuba’s humanitarian spirit also remains alive and well in its internationalism – from helping end South African apartheid to exporting medical aid to 40 nations at the epicentre of the Covid-19 pandemic. The country even developed its own Covid-19 vaccine, rescuing the population from the ongoing global vaccine apartheid.

And yet, domestic problems remain. While Cuba undoubtedly faces international hostility, the Left must not be afraid to call out repressive regimes. We must dismiss the misleading binary that the country faces a choice between free-market capitalism and what Rogelio Manuel Díaz Moreno, a socialist writer for the Havana Times, terms ‘enlightened despotism’.

In the shadow of empire

In the wake of the protests, pressure for a transition to capitalism are mounting. A number of prominent US politicians have called for further actions to be taken against the Cuban government. Given the severity of the current embargo, it is hard to imagine what this could mean outside of military intervention.

These reactionary forces have been a constant in Cuba’s recent history. They must be resisted but also point to the challenges Cuba faces in a hostile world. The country has always been in thrall to political systems outside of itself: whether as a virtual colony of the United States until the late 1950s or under the wing of the Soviet Union, which traded generously with Cuba until it’s dissolution in the early 1990s.

The collapse of the Soviet trading bloc led to a deep-recession from 1990 to 1993. The most recent protests of note followed in 1994. As a consequence, the Cuban government introduced modest reforms, one of which permitted the introduction of self-employment. Emily Morris, writing in the New Left Review, notes that such a move ‘gave some stimulus to the supply of services’ and increased, although crudely, government revenue through taxation.

Perhaps it is in this context that we should understand recent measures to introduce enterprises with up to 100 employees. A liberalising move but under the watchful eye of the Cuban government, which has repeatedly promised that nobody will be left behind through this period of tumultuous change.

Meanwhile a beleaguered group of Cuban academics, journalists and activists endure on the island of Cuba, working to recapture what historian and political theorist Rafael Roja Gutierrez characterises as the ‘changing, and at times experimental, nature of Cuban socialism’.

For Roja, the exciting intellectual diversity of the first generation of Cuban revolutionaries created ‘many revolutions’ in Cuba – whether anti-imperialist, socialist or humanitarian.

Socialist thinkers like Roja and Díaz Moreno have revived this tradition by calling for greater decentralisation and democratisation on the island through legalisation of workers’ councils and genuinely independent unions.

Pro-democracy movement La Cola de La Libertad – named with a nod to the bread lines or ‘colas’ which have become increasingly common on the island – call for ‘free and fair elections’ and an end to use of the police powers to lock up political dissidents.

Cuban anarchist collective Tierra Nueva, meanwhile, decries the ‘vulgar kleptocracy’ of the government that permits new hotels for foreign tourists while the nation’s food infrastructure crumbles under the scarcity imposed on it by the US embargo.

Instead of homogenising resistance to Miguel Díaz-Canel’s regime as a counter-revolutionary, or pro-free market, the international Left must listen to dissenting voices in Cuba and amplify their calls for change.

This means countering arguments for privatisation with calls for greater worker power, decentralisation and control of the means of production. We must shout for an end to the embargo and call out the regime’s authoritarianism. For one without the other is no socialism at all.

Jamie Medwell is a press officer and journalist writing about humanitarian issues and the Left.