Andrew Hodges looks at football fan activism and organising in Croatia – a powerful, politicised and unpredictable battle between the left and the far right 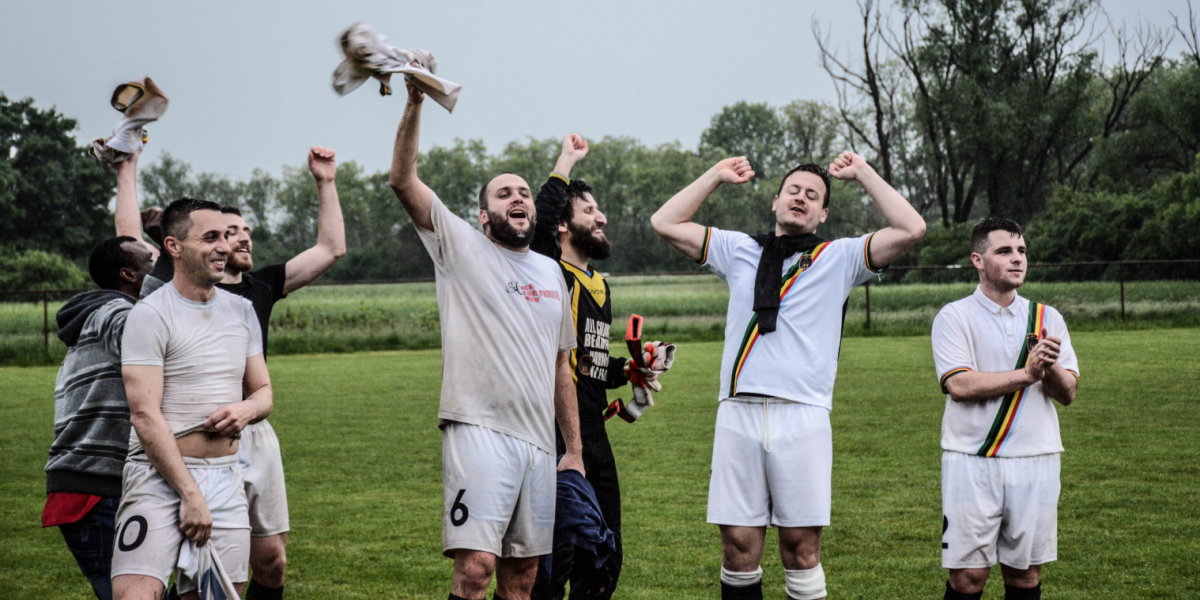 When Croatia, a small country of around four million people, defeated England in the football World Cup 2018 semi-finals, the streets of the capital Zagreb came alive with flags, flares and spontaneous parties. Discussions began on how to celebrate the team’s talent and success, including the prospect of a new national stadium. The president Kolinda Grabar Kitarović’s World Cup presence attracted particular attention, including her private purchase of economy class flights and tickets to several matches and umbrella-less congratulation of the players in the torrential rain after their defeat in the final – all presumed to be a prelude to her campaign for re-election on a populist ticket. The team’s heroes’ return was however marked – and in many eyes, marred – by the appearance of Thompson, a controversial rock singer with far-right nationalist sympathies. A fighter during the 1990s wars, he takes his name (and that of his band) from the Thompson submachine gun.

Many of these political dimensions to Croatia’s World Cup exploits relate to themes that constantly resurface in discussions of the regional fan scene, such as the growth of right-wing populism and the adoption of far-right symbols. Football fans in Croatia regularly come under the media spotlight over occurrences of fan violence and disorder and the appearance of swastikas, and other symbols and chants associated with the Ustaše Nazi puppet state established in parts of Croatia during the second world war. Perhaps the best-known example internationally was the marking of a large swastika onto the Poljud Hajduk Split pitch with chemicals shortly before a European qualifier in 2016.

Mainstream reporting from outside the Balkans often emphasises such incidents as evidence of ethnic hatred on a scale beyond that present in other parts of Europe, painting the region as the primitive ‘other’ of Europe in much the same way that football fans are often unfairly portrayed as uniformly racist, sexist and homophobic. But these crude stereotypes ignore the more nuanced and varied nature of Croatian ‘fandom’ and the effects of the economic crisis that has hit the region so hard in recent years. A focus only on such symbolic aspects – easily commented on from a distance – draws attention away from everyday fan practices and engagements, and the battles they have waged against ‘crony capitalist’ and establishment figures in Croatia. These politicised fan engagements are particularly important given that fans have organised protests on a larger scale than any trade union demonstration in Croatia to date.

Croatia became an independent state in 1991, when it seceded from Yugoslavia. A four-year war with many deaths and many more refugees ensued, with President Franjo Tuđman and his nationalist political party, the Croatian Democratic Union (HDZ), taking power and promoting authoritarian nationalist politics, including in sport. Shortly after Tuđman’s death in 1999, the opposition Social Democratic Party came to power and the first years of the new millennium were marked by talk of ‘democratisation’ and Croatia’s EU accession. The Social Democrats ruled until 2003 and again from 2011 to 2016.

Even in opposition, however, the nationalist HDZ had a strong influence through its clientelist network. It has around 200,000 members – roughly twice as many as the UK Conservative Party despite Croatia’s much smaller population – and uses its influence to promote a mixture of ‘patriotic’ and right-wing nationalist policies, as well as in allocating jobs and business. The period since the HDZ’s return to power in 2016 has been characterised as a ‘slow conservative revolution’ and protracted political crisis in which certain groups, including war veterans and football fans, have been particularly vociferous and influential.

The organised fan scene in Croatia consists of multiple groups, drawing on primarily urban subcultures in the vein of the Italian ‘ultra’ and British hooligan traditions. There is a significant crossover with the local punk and skinhead scenes, all of which are predominantly male. These range across the political spectrum, from anti-racist skinheads on the left, through the ‘apolitical’ and ambiguous ‘grey zone’ to overt far right and even Nazi groups. In Zagreb, the more right-wing scenes dominate. In other cities, such as Pula, the left is on the front foot, particularly in the punk and hardcore scene, which has close links to the youth anti‑fascist movement.

Because of their reach and influence, political parties and state authorities have a strong interest in these movements, yet also seek to distance themselves because of their unpredictable nature. Fan interventions can be viewed as a kind of creative political activity, drawing on DIY culture traditions crossing over from anarchist and punk networks, and ranging from homemade banners and flags to fanzines, songs, chants and terrace choreography. Fans in the large mainstream groups often shift between spontaneity and hierarchical organisation in their struggles with the state authorities, police, the Croatian Football Federation, and sometimes with their respective clubs and city authorities.

The organised fan scene in Croatia consists of multiple groups, drawing on primarily urban subcultures in the vein of the Italian ‘ultra’ and British hooligan traditions

This terrain of struggle forms the common ground shaping everyday social interaction in organised fan groups more so than the symbolic concerns mentioned above, and several of these struggles – against police repression and the Croatian Football Federation, in particular – cut across political left-right distinctions. The main Zagreb-based group, GNK Dinamo’s Bad Blue Boys, is committed to a Croatian nationalist platform, while smaller groups such as the leftist, anti-fascist followers of NK Zagreb, the White Angels – in which I participated for several years – work alongside refugees and LGBTQ fans to promote their ideas on the terraces, counteracting the racism, homophobia and right-wing nationalism present in the fan scene and society more widely.

In addition to terrace choreographies and raising banners with political and football-related messages, the White Angels have also organised punk concerts, social events, football training sessions and friendly tournaments with refugees, and have now set up a community club called NK Zagreb 041. They maintain close links with the German left-wing fan scene, regularly hosting visiting fans from clubs such as SV Babelsberg 03 and St Pauli.

Except for explicitly left‑wing groups such as the White Angels, there is no requirement that everyone should share the same views on particular issues. Membership of the mainstream fan associations cuts across standard political lines and anything resembling a ‘party line’ is practically impossible to enforce. Structural sexism and homophobia is frequently present, however, bound up in the identification with male ultras and the impact of the recent wars and patriarchal shift that accompanied them. A degree of sexism and transphobia was even present among some members of the White Angels.

Some fans followed Croatia’s World Cup success sceptically, wary of the possible legitimacy it could bring to the Croatian Football Federation (HNS), which is viewed by many fans as corrupt and promoting a ‘crony capitalist’ version of modern football. The HNS is widely regarded as dominated by ‘war profiteers’, who became rich through black market activities or suspect dealings during the 1990s, and who now have close links to certain members of the political elite, primarily among the nationalist HDZ. They are viewed as corrupt, clientelist and engaged in non-transparent business practices, protected by laws that are applied selectively to discredit or punish political opponents. Football fans have direct experience of this sort of thing in the form of blacklists, unwarranted arrests and attacks on their human rights.

The actions of the Croatian Football Federation have alienated large portions of the fan base, contributing to the burgeoning ‘Against Modern Football’ movement

Luka Modrić, Croatia’s captain and winner of the World Cup ‘golden ball’ award as the tournament’s best player, was in court shortly before the competition, accused of false testimony in the defence of the former GNK Dinamo Zagreb president Zdravko Mamić. Modrić faced possible jail time over his role in Mamić’s alleged siphoning of funds resulting from the sale and transfer of top players to leading European clubs, while Mamić fled to Bosnia and Herzegovina on the day of his sentencing.

The actions of the Croatian Football Federation have alienated large portions of the fan base, contributing to a significant decline in match attendance in recent years and a burgeoning ‘Against Modern Football’ movement. This has resulted in a series of fan experiments with forms of participative and direct democracy, with the Dinamo’s Bad Blue Boys fan group launching a football club Futsal Dinamo based on a one member-one vote principle, and the legal initiative Together for Dinamo, seeking to democratise their club and oust the notorious Mamić.

Some mainstream fan groups operate as autonomous and oppositional cousins of the dominant political elites in their respective locations, while remaining part of the same ideological family. For instance, the far-right presence in the organised fan scene echoes more general shifts in political life in recent years.

Zlatko Hasanbegović was formerly a heavily-involved member of the Bad Blue Boys, before he went on went on to become minister of culture in the previous government. Hasanbegović, who has links to the far right, and who glorified the Ustaše movement in the past when writing for a pro-fascist bulletin, removed funding for many non-profit media when he came into power, while increasing state funding for Catholic magazines and newspapers.

Despite these tendencies, and a desire to publicly demonstrate a show of homogeneity on the terraces, the fan movement is ideologically diverse, and its persistence, oppositional and anti-authoritarian stance, zeal for social and political action and ability to organise means it should not be ignored, especially in moments of more general social crisis.

Andrew Hodges is a social anthropologist working at the Leibniz Institute for East and Southeast European Studies in Regensburg, Germany, and author of Fan Activism, Protest and Politics: Ultras in Post-Socialist Croatia