29 August 2018 Dorothy Guerrero writes that we're crashing out of the European Union and into the Trans-Pacific partnership: A free trade deal with all the disastrous hallmarks of TTIP.

10 July 2018 Dorothy Guerrero writes that hostile trade wars and American protectionism will double down on the damage done by decades of US-driven global free trade policies.

26 June 2018 The Comprehensive Economic and Trade Agreement enshrines the right of corporations to make profit - whatever the cost to real people. By Jean Blaylock 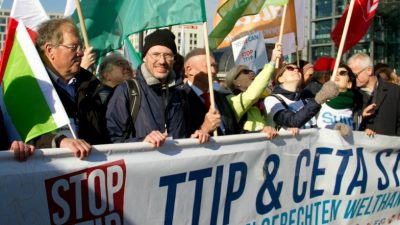 International development and the potential for change beyond capitalism

Essay: The death of international development

25 February 2015 ‘Development’ has failed to deliver. The reason, Jason Hickel argues, is that development organisations have failed to address the structural drivers of poverty

A manifesto for global justice

24 February 2014 Trade and investment agreements currently being negotiated will mean the biggest corporate power grab in a decade. We need a new global movement to confront them, writes Nick Dearden

24 February 2014 After the EU banned pesticides linked to declining bee populations, the companies that make them launched a court case to challenge the ban. Sandra Bell reports

The new scramble for Africa

Capital courts: how corporations can hold governments to ransom

24 February 2014 Transnational corporations have won shocking powers to sue sovereign states, writes John Hilary, and they are not shy of using them

1 December 2009 Ten years ago, the global justice movement burst from the streets of Seattle onto the world's television screens. John Hilary examines the victories and challenges of the last decade

1 September 2003 At one level, an unprecedented unity has emerged across the nascent "global justice and solidarity movement" towards the trade talks in Cancun. Conservative trade union organisations like the TUC and its international lobbying body the International Confederation of Free Trade Unions (ICFTU) can now agree on a basic platform of demands with radical Southern-based NGOs and social movements of the "Our World is not for Sale" network.

The bluffer’s guide to… The WTO

1 September 2003 The WTO? Not another governing body for boxing is it? Nope, it’s the World Trade Organisation. Oooh, that sounds grand. Tell me more. The WTO was set up in 1995 to replace the General Agreement on Tariffs and Trade (Gatt). Gatt was designed to reduce taxes on imports, but the WTO’s programme has greatly expanded […]

Free trade on a knife edge

1 September 2003 Aileen Kwa outlines the issues that could make or break the WTO at Cancun:

1 August 2003 Friends of the Earth has lodged a complaint with the European Commission's Ombudsman in a bid to force the Commission to release documents detailing the European Union's stance in international trade negotiations.