When they say we cannot feed the world without chemicals and biotechnology, they are lying, writes Jules Pretty

One seventh of the world’s population – 800 million people – are hungry. This much is agreed, but what we do about it is highly contested. Food production will have to increase if we are not to be faced with epic crises. But this is not a simple problem. We already produce enough food in the world to feed everyone with a nutritious and adequate diet now—on average 350kg of cereal per person. A good deal of cereal is turned into meat, milk and other animal products, which is inefficient in energy terms.

But a more important factor is that most hungry people are poor; they simply do not have the money to buy the food they need. Poor farmers cannot afford expensive ‘modern’ technologies that could increase their yields. What they need are cheap, readily available means to improve their farms.

We are seeing the beginning of a quiet revolution in the world food system – though not everyone would agree. Many people argue that we need genetic modification of crops and animals in order to feed the world. But do we? Those concerned with the food system, farmers and consumers, activists and companies, citizens and policymakers, fall into different camps which shape the way policy is formed.

Some say the industrialised countries will have to come to the rescue by greatly increasing their own farm production. Others say that exporting fertilizers and pesticides to developing countries will help them increase their production. Others still advocate genetic engineering of plants and animals as the greatest single technology that will feed the world. Another group says that sustainable agriculture is a viable alternative for all farmers, north and south, since it has the potential to improve productivity on existing lands.

It could be that each argument can make a contribution. But some of the protagonists are conveniently, and aggressively, ignoring the perspectives of others. The PR campaign of the American company, Monsanto ‘Let the Harvest Begin’, states that Europeans should stop being selfish in refusing to accept Genetically Modified Organisms (GMOs). They say: “agricultural biotechnology will play a major role in realising the hope we all share. Accepting this science can make a dramatic difference in millions of lives”.

This myth seems to fit our preconceptions because we still tend to see people in developing countries as victims. Clare Short, Minister for International Development, asked the media earlier this year to focus more on positive stories rather than only picking up on the disasters. Let’s get something straight. Something must be done about the huge numbers of people in severe poverty and suffering continuous hunger, but that is not to say we must pursue a path of ‘modern’ technologies and hang the consequences. As with all new technologies, there are emergent problems associated with biotechnology and genetic engineering.

It is possible that GM crops could make a contribution to food production in the south – but only if the technologies are produced by public-interest bodies which make them available to poor farmers. Organisations seeking a quick and large return on atechnology cannot possibly argue that they are working directly to benefit the 800 million hungry people in the world. This is illustrated by their so-called terminator technology – seeds that die after one year so that farmers cannot save them to plant the following season. How could this benefit the two billion people in thrd world countries who depend on largely ‘unimproved’ agricultural systems? Who will feed all the people in developing countries? The answer is simple – farmers in those countries, using sustainable methods of production.

Quietly, slowly and significantly, sustainable agriculture is sweeping the farming systems of the world. This type of farming integrates natural processes such as nutrient cycling, nitrogen fixation, soil regeneration and pest predators into food production processes. It minimises the use of pesticides and fertilizers that damage the environment or harm the health of farmers, and it uses the knowledge and skills of farmers.

During this century, pesticides, inorganic fertilizer, animal feedstuffs, energy, tractors and other machinery have become the primary means of increasing food production.These external inputs, though, have replaced free natural control processes and resources. Pesticides have replaced biological, cultural and mechanical methods for controlling pests, weeds and diseases; inorganic fertilizers have replaced livestock manures, composts, nitrogen-fixing crops and fertile soils; and fossil fuels have replaced locally-generated energy sources. The basic challenge for sustainable agriculture is to maximise the use of locally-available and renewable resources.

The best evidence that this can work comes from those very countries of Africa, Asia and Latin America that are said to need ‘modern’ technologies most. Where whole communities have been involved in the complete redesign of farming and other local economic activities, the sustainability dividend is very large. The regenerative technologies are beneficial for both farmers and rural environments. They make a positive contribution to nature. At the same time, direct costs are reduced. There is ‘more from less’. More natural capital from fewer external inputs. More food output from fewer fossil-fuel derived inputs. These improvements are of two basic types.

First, sustainable farming is taking root in the resource-poor areas, those that have remained largely untouched by modern technologies of the past 40 years. Here the dividend is greatly increased food output per hectare – up two- to threefold. The second spread is occurring in the higher-input systems where the so-called Green Revolution has already had an impact on food output, but where there are concerns that yield increases have slowed or stopped and where high use of pesticides is damaging human health and environments. Here the dividend comes from a replacement of pesticides by natural predators, habitat redesign, multiple cropping and the like—whilst increasing yields by a small amount, typically one per cent.

What is remarkable is that most of this has happened in the past five to ten years. Moreover, many of the improvements are occurring in remote areas with few resources, that had been assumed to be incapable of producing foodsurpluses.

Here are some highlights:

*223,000 farmers in southern Brazil using green manures and cover crops of legumes and livestock integration, have doubled yields of maize and wheat to 4 – 5 tonnes per hectare

*more than 300,000 farmers in south and west India, farming in dryland conditions, and using a range of water and soil management technologies, have tripled sorghum and millet yields to some 2 – 2.5 tonnes per hectare

*100,000 small coffee farmers in Mexico have adopted organic production methods, yet increased yields by half

*a million wetland rice farmers in Bangladesh, China, India, Indonesia, Malaysia, the Philippines, Sri Lanka, Thailand and Vietnam have shifted to sustainable agriculture, where group-based farmer-field schools have enabled farmers to learn alternatives to pesticides whilst still increasing their yields by about 10 per cent.

In Burkina Faso, Ethiopia, Senegal, Uganda and Zambia, like Bolivia and Peru, China and Pakistan, thousands of community-level initiatives show that if farmers are involved in technology development, they can improve the food outputs without diminishing natural capital.

These developments are pointing to a new future—one in which there is sufficient food for all, produced in ways that do not damage the environment.

What is the expected response of farmers in industrialised countries to sustainable agriculture? The story is that if they were to adopt sustainable farming, then food yields would fall so much that the world food system itself would be under threat. At the beginning of the 1990s, the former US Secretary of Agriculture, Earl Butz, said we could move to more sustainable farming, but “before we move in that direction, someone must decide which 50 million of our people will starve. We simply cannot feed, even at subsistence levels, our 250 million Americans without a large production input of chemicals, antibiotics and growth hormones”.

This view once again ignores what is happening right now. I have looked at projects in seven industrialised countries of Europe and North America, and found that remarkable changes are underway. Farmers are finding that they can cut their inputs of costly pesticides and fertilizers substantially, from 20 – 80 per cent, and be financially better off. Yields do fall to begin with (by 10 – 15 per cent typically), but there is compelling evidence that they soon rise and go on increasing.

In the USA, for example, the top quarter of sustainable agriculture farmers now have higher yields than conventional farmers, as well as a much lower negative impact on the environment. The challenge is still massive. We know sustainable farming can greatly improve the productivity of the land. It has already done so for more than two million families in the past 5 – 10 years. Yet there is still a long way to go. It is vital that we do all we can to build the capacities of farmers and countries to make improvements with sustainable agriculture.

Governments should now declare a national policy for sustainable agriculture. This would help to raise the profile of these processes and needs, as well as valuing alternative societal goals. There is a growing sense that green or eco-taxes are an efficient way to help meet environmental objectives, as well as to generate jobs and raise government revenue. These shift the burden of taxation away from economic ‘goods’, such as labour and sales, towards environmental ‘bads’, such as energy, transport, waste and pollution. The market prices of food and other agricultural products do not reflect the costs of the farming and food system as it currently operates. Some of these costs are dispersed through society. The producer does not need to pay for them. Environmental taxes or pollution payments, however, seek to ‘internalise’ some of these costs, encouraging individuals and businesses to use resources more efficiently.

Green taxes are a double dividend option: they could cut environmental damage whilst promoting welfare. National taxes on pesticides seem the most likely option in Britain, But there are constraints and vested interests to overcome. Why should fertilizer companies support a transition to legume-based livestock farming when this could cost them several hundred million pounds each year in Britain? Why should a pesticide company be balanced in its presentation of sustainable agriculture when it knows that this would mean that few of its products will be used? Much will depend on what policymakers and the public appreciate is possible with sustainable approaches to farming, and just what kind of benefits could accrue.

Jules Pretty is Director of the Centre for Environment and Society at the University of Essex. He is the author of The Living Land: 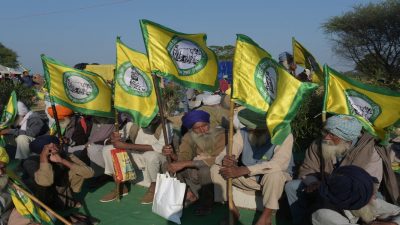