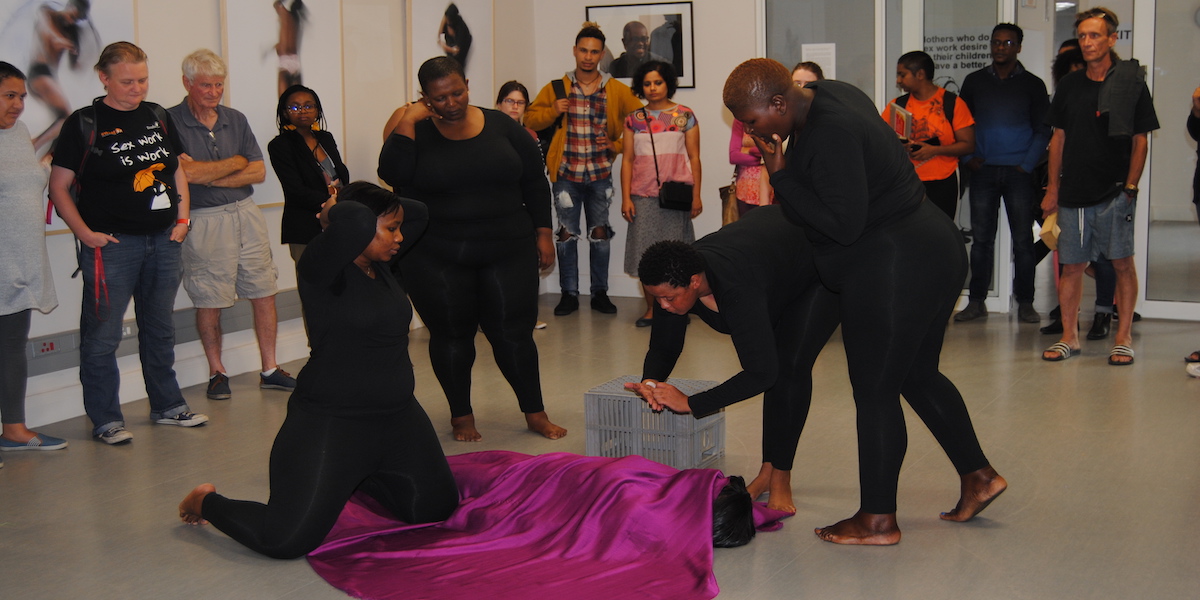 A performance of Ntando Yam

As a gender studies scholar, I was enthusiastic to join the South Africa team of the Global Gender and Cultures of Equality (GlobalGRACE) research project. We are based in Cape Town, and use participatory theatre methods with a dynamic group of sex workers, most of whom are activists. I was also nervous because I had no background in theatre. I had heard about some aspects of participatory theatre, such as theatre of the oppressed, but only minimally.

So, I will be honest: I had no idea how we would address our research questions – what does equality and well-being look and feel like to sex workers in South Africa? When and where do sex workers feel dis/empowered? How does ethnicity, sexuality, disability/ illness, age affect these feelings? – using theatre and performance as the research methodology.

Under the title ‘Participatory theatre and the production of cultures of equality among sex workers in South Africa’, the project is facilitating training with and for an organised group of sex workers in a number of theatre and performance skills, over a period of two years. Our collective aim is to launch an independent sex worker theatre in South Africa at the end of that period. The various training includes theatre of the oppressed, image theatre, the Japanese dance theatre butoh, contact improvisation, mime and storytelling, as well as script writing, among much else.

By the start of the project, I was excited and eager to learn. I attended a number of workshops and seminars by the Centre for Theatre, Dance and Performance Studies (CTDPS) at the University of Cape Town, where I picked up some more concepts, especially from forum theatre or theatre of the oppressed (I use the terms interchangeably).

Theatre of the oppressed was created by the Brazilian theatre visionary and Nobel Peace Prize nominee Augusto Boal as a form of popular, community-based education that uses theatre as a tool for social change. It originally developed out of Boal’s revolutionary work with subaltern communities in Latin America but is now used worldwide for political activism, community building, conflict resolution and government policy work, as well as therapy.

Forum theatre (FT), a feature of the theatre of the oppressed method, is usually interactively framed around social justice issues. Usually a play or scene is shown twice; during the replay, any audience member can shout ‘Stop!’ and take the place of the subjugated characters, showing how they could change the situation to enable a different outcome.

Following a couple of sessions offered by CTDPS, I began to comprehend the process of FT. For instance, why the role of the ‘joker’, or facilitator, is crucial. The person in that role takes responsibility for the logistics and ensures a fair proceeding but must never comment on nor intervene in the performance. I also better understood the role of ‘spec-actors’ – not ‘spectators’. This refers to the dual role of those involved, where, on the one hand, they watch the process unfold, while on the other hand, they participate as actors. They therefore both observe and create dramatic meaning and action in the performance – for instance, by suggesting a different ending to a scene.

These notions and the conceptualisation of FT were eye-opening on how a critical dialogue can be developed in a community setting on elements of social justice – such as those concerning stereotypes around sex work.

Theatre of the oppressed was just the first training module for the sex workers’ group. It took place over a period of three months and culminated in a first public performance in August. And what a performance it was! The play was titled Ntando Yam, a Xhosa expression which means ‘my choice’. Everyone who attended left raving about it.

For me, the power of theatre as an approach to social justice came through very clearly. The performance was a compilation of lived experiences, glimpses of the everyday life of sex workers, as offered by the group members. For instance, the opening scene is a narration of the ‘outrageous’ reasons, all based on real experiences, for arriving late to a work meeting or a theatre training session – set in the context of a catwalk.

The performance was a compilation of lived experiences, glimpses of the everyday life of sex workers, as offered by the group members

That opening highlighted the comedic aspects of the play. However, one of the powerful scenes that stood out for me connected the multi-layered forms of violence that sex workers in South Africa experience. In this scene, set in a strip club, the protagonist is dancing while a background narration explains the forced removal of people of colour from the city centre and suburbs of Cape Town and their relocation to the margins – to the townships.

The narration goes on to relate how apartheid privileged whiteness and relegated people of colour to structural margins. At the same time, the protagonist dances while several people, carrying different placards depicting ‘client’, ‘police’, and ‘state brutality’ make their way through her legs one after another.

This scene was powerful because it brought out the intersectional dynamics of the violence many South African sex workers face. First, there is structural/state violence in the form of explicit laws. Sex work is criminalised in South Africa, despite the country’s liberal constitution providing for equal rights for all citizens. This reflects the disconnect between what is said to be one of the most progressive constitutions in the world and the lived realities of sex workers.

Even within a context of dire structural inequality, however, the element of agency or choice of sex work was emphasised, as the title of the play stipulates – for instance, choice of sex work instead of domestic work, which is feminised subjugated work.

Through working with the sex workers’ group, theatre as a methodology has come alive for me and the lived realities in terms of our research questions were stark. Social justice issues are strongly embedded in this approach and come across powerfully – in this case, the decriminalisation and de- stigmatisation of sex work. Both the process of creating and the impact of performing the work offers me some hope in this structurally unequal world.

Phoebe Kisubi is a post-doctoral researcher based at the Africa Gender Institute, University of Cape Town