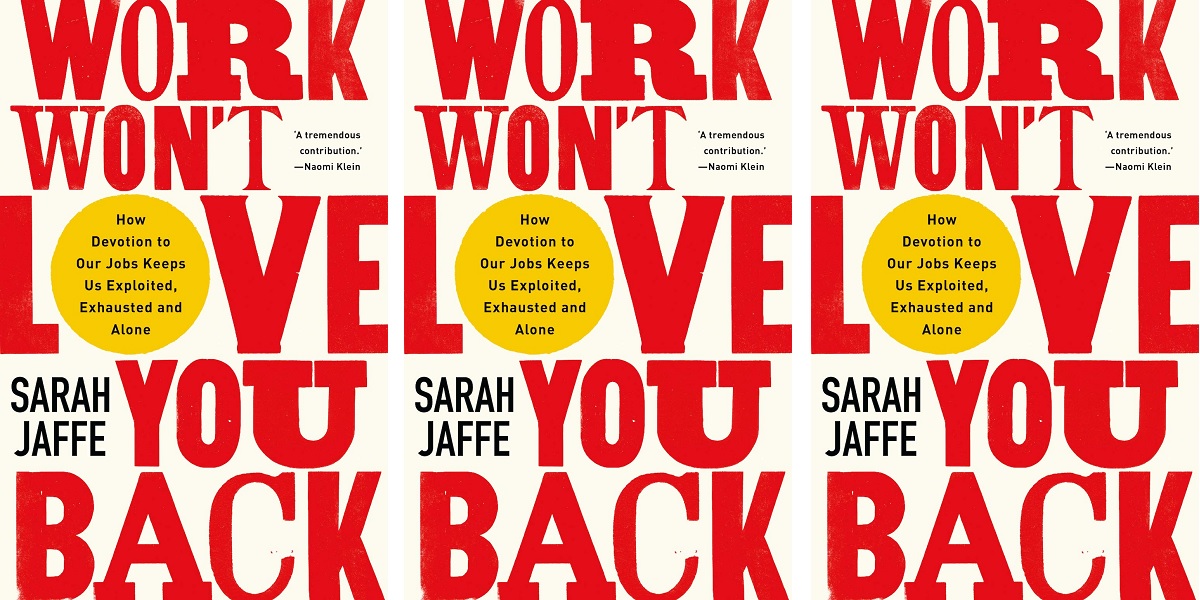 Sarah Jaffe is a rarity in the US. Not only is she one of the few journalists still reporting on the labour movement, but she sits on an even shorter list of writers intent on covering the everyday stories of working people through a lens of dignity and empowerment.

At the National Domestic Workers Alliance, where I work, we know Jaffe as a writer our members can trust to do justice to their stories. Knowing Jaffe’s work, it comes as no surprise that Work Won’t Love You Back is rooted in the voices of working people, while at the same time casting a critical eye over some of society’s most intimate work relationships. Its central argument is compelling: the idea that any job can be termed a ‘labour of love’ is not only a myth, but a veil that obscures systems of exploitation guided by the hand of neoliberalism.

The book is divided into two sections. The first covers ‘care’ professions traditionally rooted in women’s unpaid labour; the second explores industries deemed as ‘creative’ or that are seen as offering their own, non-financial reward. Each chapter opens with a worker’s personal story before diving into the history of the sector in question and ending with a note on the impacts wrought by Covid-19. Musicians, high school teachers, video game developers, professional athletes, retail workers and non-profit staff all grace the pages of Jaffe’s book, documenting their own struggles to reconcile ‘passion’ for their work with seemingly never-ending sacrifices of time or pay.

In drawing parallels between disparate sectors, Work Won’t Love You Back is ambitious in breadth. It also reaches for impressive theoretical depth, weaving classical Marxist theory together with contemporary analyses from Silvia Federici, Angela Davis, Francis Fox Piven and bell hooks, among many others. Jaffe draws on intersectional race, class, feminist and migration studies to illustrate, for example, how domestic work has been historically constructed as performed by women of colour, working-class people and immigrants.

That construction, combined with legacies of chattel slavery and entrenched racism, explains why domestic work was explicitly omitted from labour protection laws under 1930s ‘New Deal’ legislation. Similar exclusions remain today, framing some jobs as less important – and some workers less ‘skilled’ – than others. While frequently illuminating, chapters are layered with so many ideas and references that they occasionally feel dense, even without the coronavirus codas. Its interviews with workers are where the book really comes to life. Reading through, I found it impossible to avoid self-reflection. Adela Seally, a nanny from Saint Lucia working in New York, reminded me of my own immigrant mother, a house cleaner in Chicago.

Seally says: ‘You have to leave your child and go take care of somebody else’s child… That in itself can really take a toll. It makes you feel guilty.’ My own mother would end up caring for the children of middle- and upper-class families in the city suburbs, without extra pay and rarely a thank you. While Seally, a domestic worker and racial justice organiser, loves to see the children she cares for develop, neither she nor Jaffe gloss over the stark, often painful, lived realities that millions of domestic workers face.

Similar contradictions are discussed by other workers Jaffe profiles. Ashley Brink, who worked at a branch of Planned Parenthood (a reproductive justice non-profit organisation) recalls a wide-scale anti-union campaign led by her bosses. ‘For an organisation that claims to be feminist,’ says Brink, ‘to also have staff that can’t afford to pay their bills or take care of their families… is very hypocritical and frustrating.’ Jaffe explains why Brink’s experience is not surprising by tracing the modern non-profit model back to its industrial capitalist roots – with donations and foundations offering tax relief to the wealthy. ‘Charity,’ writes Jaffe, ‘is a relationship of power’ that requires a hierarchy of need. Historically structured as (elite) ‘women’s work’ – and ‘passion projects’ – it did not even register as an area requiring fair remuneration and working conditions. Today, many non-profit workers eager to do social justice work (including me) face burnout and frustration within the ‘non- profit industrial complex’. Still, many of us do ‘love’ our work.

This contradiction gives Work Won’t Love You Back a sobering power. It reminds us that we can – and must – interrogate the realities of all of our workplaces. But this book is as much a critique of the labour-of-love ethic as it is as a blueprint for organising. We are reminded, for example, that Adela Seally comes from a long line of freedom fighters, such as civil rights activist Dorothy Bolden. In the 1960s, Bolden creatively organised tens of thousands of domestic workers across the South by bridging the civil rights movement with voting and workers’ rights. Throughout the book, Jaffe highlights that women of colour like Bolden are frequently at the forefront of movements for labour justice, even though they have often been written out of the story.

Today, recognising the interdependence of our work relationships, domestic workers are forming unlikely alliances with their employers to push for better industry standards. Non-profit workers are rejecting the norms and narratives that pit them against their clients. Teachers’ unions are forging powerful pathways of solidarity with students and parents. They remind us that new forms of work are possible if we fight for them together. ‘Love,’ Jaffe writes, ‘was once considered potentially subversive precisely because it encouraged people to value something other than work.’ We must not discount the power of love now, even as we critique its misuses.

Love builds social movements. It is the connective tissue of collective action. And its potential is revolutionary.

Marzena Zukowska is a writer, organiser and researcher based in London

This article first appeared in Issue #231, People, Power, Place. Subscribe today to support independent media and get your issue hot off the press!