Ask a room of environmentalists to name an inspirational book and the odds are heavily stacked that Rachel Carson’s landmark text Silent Spring will be among the most popular. It is recognised as a seminal piece of work that has influenced and galvanised multiple generations to protect the natural world around us. Silent Spring was a wakeup call to the destructive nature of the industrial pesticide dichlorodiphenyltrichloroethane (DDT) in the environment. Carson’s book and legacy cannot be overstated. So for Dr Stephanie Seneff’s body of work Toxic Legacy to be described as a ‘modern day Silent Spring’ should be more than enough to pique interest. Whether the comparison is premature remains to be seen.

Toxic Legacy is the culmination of ten years of research from the Massachusetts Institute of Technology senior research scientist Dr Seneff on the chemical herbicide glyphosate. The book points toward widespread havoc as a result of its use, not just in the natural world but our bodies too. Even if you haven’t heard much about it before, expect to do so more and more. It’s the herbicide sprayed on the food crops that end up on your dinner plate, the cotton in your socks, and by local authorities in towns and cities in their grounds’ maintenance. It is, however, worth noting at this point that Seneff’s findings on the linkages between glyphosate and a plethora of human conditions are contested by others in the academic world.

From herbicide to carcinogen 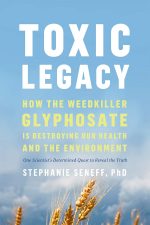 Glyphosate, the focus of Seneff’s research, might not immediately ring a bell. However, Monsanto – which also produced Agent Orange and the aforementioned DDT – and their trademarked controversy-drawing weed-killer Roundup, in which glyphosate is the key ingredient, may well do. Roundup has been linked with a type of blood cancer called non-Hodgkin lymphoma in those who have been exposed to it. Indeed, large- scale class action lawsuits in the US have ordered parent company Bayer, which acquired Monsanto in 2018, to pay out damages in the billions of dollars. The extent of the alleged link is so great that tens of thousands of cases are outstanding, and it is expected to cost Bayer many more billions to settle current and future cases. Monsanto has regularly argued through its own funded studies or paid experts that it is harmless and has no impact on human or environmental health.

Seneff’s research on the effects of glyphosate is so extensive that she chooses not to include a dedicated chapter on its links to cancer in the book. In her own words, Seneff wants the reader ‘to understand how exposure to glyphosate sets the stage – through severe metabolic disruption – to take a person to cancer’s door’. And so begins a potentially worrisome account tying the herbicide to a plethora of ills, ailments and diseases.

Scarily reading like a shopping list of human health conditions, the book delves into research pointing toward glyphosate disruption of the gut microbiome, links to liver disease, infertility, neurological disorders and autoimmune conditions. You would be forgiven for feeling nauseous as the breadth of conditions and their alleged links to glyphosate are explored. A standout is the contextualisation of glyphosate and the various uses it has been patented for. In 1961, the Stauffer Chemical Company used the chemical as a chelating agent to strip minerals from pipes and boilers in commercial hot water systems. In 1968, Monsanto patented its use as an agricultural herbicide (Roundup), and then again in the early 2000s as an oral antibiotic. These multitude of uses are identified as key ways in which the chemical rampages through our bodies and the world around us.

A source of contestation

Seneff’s work is not without criticism, with some scientists disagreeing with her conclusions and pointing toward correlation not equalling causation. Again, there are some parallels with Carson’s Silent Spring, which came under fierce scrutiny upon release. Carson herself was personally dragged through the mud and mischaracterised by industry and industry-funded ‘science’ in efforts to diminish her work.

It isn’t outlandish to think that those claiming negative impacts from glyphosate usage would come up against similar opposition. Other industries, such as oil and tobacco, have clear track records of employing every trick in the book, from bogus science to front-groups, to undermine their opponents, so why not this industry? Seneff points to a number of academics and scientists that have come up against powerful vested interests. Some have found their work on the receiving end of lobbying to discredit their research, obfuscate findings and wield undue control over the publishing industry to effectively censor information harmful to their profit-driven exploits. With the global market just for glyphosate set to top $13 billion by 2027, up from $9 billion in 2019, those profits continue to rise.

For the layperson it is relatively difficult to navigate Seneff’s work and the associated critique. It feels prudent to suggest Toxic Legacy not be read in isolation, but as part of a catalogue of research and journalism interpreting the effects of industrial agriculture and the impact it has on humans and the environment. Yet even with critique in mind, if one was to objectively consider Seneff’s work to be even partially accurate, that should be more than enough cause for concern.

Without a care for the Earth

As with historic widespread application of DDT, glyphosate is tied up within an industrial agricultural system that has had little consideration of wider environmental and biological damage. While the climate crisis rightly makes headlines, the degradation of the Earth’s ecosystems is seldom highlighted save for sporadic stories lamenting the loss of recognisable, usually ‘cute’, animals heading toward extinction. It is not as common to hear of soil degradation, water eutrophication and collapsing insect populations as a result of industrial agricultural inputs. Yet human life is dependent upon a healthy environment and flourishing ecosystems that are being saturated with chemicals, toxins and harmful agents, not just glyphosate.

Toxic Legacy is published in the context of capitalist industrial extraction pushing environmental boundaries to their limits, wreaking havoc on communities and jeopardising human and planetary health almost to a point of no return. Entire industries and the inordinate wealth of a tiny but powerful minority are reliant on destructive practices that are rightly coming under rigorous and increasingly visible scrutiny.

Movements to limit or ban the use of chemical herbicides, pesticides and fertilisers are gaining ground. The EU placed a moratorium on the use of bee-killing neonicotinoid pesticides in 2013, with a ban coming into effect from 2019, albeit with controversial loopholes. Dozens of cities and municipalities in the US have restrictions or outright bans on the use of glyphosate, while countries such as Austria, Vietnam and Germany will not permit its use from 2024. And beyond existing bans, glyphosate is only approved until 2022 in the UK and EU, at which point its future is set to be decided upon.

Toxic Legacy isn’t easy on the reader, nor the most accessible with its language tied and twisted within organic chemical compounds, scientific acronyms and biological processes. Yet even with the barriers it presents and the controversy its author has drawn, the naturally worrisome feelings arising from its contents make it a tough one to put down. I have my doubts that Seneff’s work will be the nail in the coffin for glyphosate. However, even being so contested, one should approach this book with an open, but firmly critical mind.

Jake Woodier is an editor at Red Pepper and climate campaigner. Toxic Legacy is out now from Chelsea Green Publishing.

This article first appeared in issue #233, ‘Democracy on the wing’. Subscribe today to get the magazine and support fearless, independent media.