The mosaic of Theodoric’s palace with the walled city of Ravenna behind at the Basilica of Sant’Apollinare Nuovo. Photo: Kieran Dodds

Ravenna, to anyone raised on western school history, is at first baffling. What are these gigantic, red-brick tram-sheds or warehouses, which are more than 1,500 years old and – unlike, say, medieval European cathedrals – give no hint of the magnificence inside? What are a Byzantine emperor and his empress, Justinian and Theodora, doing here in Italy, staring down black-browed from the mosaics of the San Vitale church? And why are there Goths here, and who was Theodoric the Goth, whose terrifying mausoleum – outside the city wall – looks like an emplacement for the biggest siege gun ever made? Its lid, rather than dome, is a single 240-ton disc of Istrian marble, quarried and somehow shipped across the Adriatic. All this was completed more than a century before St Augustine landed in Thanet to confront the pagan Angles.

Judith Herrin, a professor at King’s College London, is already Britain’s best-known living Byzantinologist. Learned and witty, her books and articles have brought her subject out of shadow into a daylight where the dealings of emperors, exarchs and bishops become comprehensible, often lively, often concerned with issues acute in our own times. Her Women in Purple, which came out in 2001, looked closely at the long series of extraordinary women, some creative and domineering, some disastrously impulsive, who wielded power in Constantinople and in Ravenna itself. She is original in wider ways, too: not only in her painstaking reconstruction of social and economic life in Ravenna from often fragmentary documents, but in her broad take on the whole period from about the fourth to the ninth century. 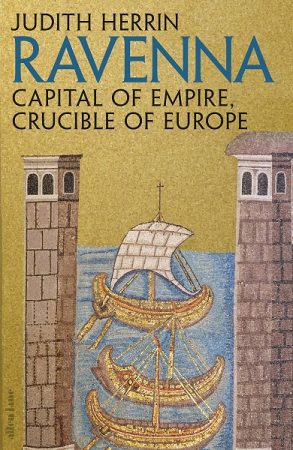 She doesn’t accept Edward Gibbon’s Decline and Fall version, in which the Byzantine empire figures as one of the external enemies that brought the western Roman empire to dissolution. The phrase ‘late antiquity’ annoys her. Instead, Herrin prefers ‘early Christendom’, and she writes of ‘the threat of alternative centralised powers – Persia, and later Arabia – to replace the entire Roman order with their own language, religion and legal structure. Constantine I’s creation of a new eastern capital… transferred and thus sustained the Roman empire in an overtly Christian setting, combining ancient administrative, technical and legal capacities with the popular energies and theological claims of Christian faith, and the culture and learning of Greece.’

Ravenna was not – or only briefly – an imperial capital in the sense that Rome or Constantinople were. Its importance was as a sort of life-raft of Roman authority and civilisation that could survive intact in times when the rest of the slowly-sundering empire was flooded with invasion, internal conflict and frantic doctrinal schisms. This survival was, in the first place, about geography. Ravenna stands by the Adriatic coast in the southern fringes of the Po delta. Unlike Rome, or Milan, it was surrounded by marshes and wetlands, difficult for hostile armies to cross, but like both those cities, it had massive defensive walls. Better still, Ravenna had an excellent harbour at Classe, which the city’s bishops, ‘exarchs’ and other rulers deepened and extended.

The old Roman roads across the height of the Apennines had grown neglected and dangerous, so that it was sometimes easier to reach Constantinople by sea than to cross the spine of Italy and reach Rome by land. This opening to the sea also meant – Herrin is very informative about this – that the ruling elites of Ravenna had access to their estates elsewhere, providing not only rental income from tenantries but food supplies for the city, above all from Sicilian grain but also from farms in Dalmatia, Istria and in Italy itself.

This prosperity and continuity, while Rome itself crumbled and lost population, and while non-Roman hordes overran the Balkans and much of the old western empire, made Ravenna a refuge. Alaric and his Gothic armies broke into Italy around 400 AD. He was at first beaten back by the talented soldier Stilicho, who advised the emperor Honorius to move his capital to Ravenna. The paranoid Honorius had Stilicho beheaded a few years later, and in 410, after several failed attempts, Alaric and the Goths captured and sacked Rome.

Here Herrin turns to the story of one of her favourite characters, the future ruler Galla Placidia, half-sister to Honorius. Born in Constantinople but brought up in Ravenna, she was 18 when she was taken hostage by the Visigoths outside Rome. Clever and highly-educated, the princess spent the next few years bumping around in Goth wagons, married (willingly or not – accounts differ) to Alaric’s son Athaulf. He was murdered a few years later, but it was not until Honorius had blockaded a Gothic army in Gaul that Galla Placidia was released in exchange for 600,000 ‘measures’ of grain.

Back in Ravenna, she remarried, built marvellous churches and her own mausoleum, and ran the empire herself, allowing her son Valentinian III no experience of power. She also forbade her daughter Honoria to marry, with the result that Honoria, aged 31, sent a letter enclosing a wedding ring to Attila the Hun, ‘the scourge of God’, begging him to come and rescue her. A rapid stop was put to that. Herrin makes clear that Galla Placidia was a superb ruler but a rotten mother.

Attila, Alaric and their followers are traditionally classified as ‘barbarians’. Visigoths and Ostrogoths, Huns, Vandals, Herulians, Lombards, Slavs all invaded the empire and broke it up. (Some would say that the Crusaders, who sacked Byzantium in 1204, were the final barbarian wave.) The intact survival of ‘Roman order’ in generally-unconquered Ravenna confirms that these external factors, not internal economic or moral decay, were the decisive cause of the ‘decline and fall’. But Professor Herrin’s book also puts these great population movements in a more interesting light.

What the ‘barbarians’ wanted was to be accepted, to be given land on which to cease wandering and settle, rather than to stay in their initial loot-and-slaughter mode. Most of the early invaders in this book’s period (though not the Huns) were already Christian – usually of the Arian persuasion – when they crossed the old Roman borders. It was not until the Arab-Islamic westward advance began in the seventh century that Rome and Byzantium encountered invaders who had no interest in striking a deal about settlement and no intention of seeking a religious compromise.

Religion, the theological schisms that wasted so much of the time and energy of lay rulers, inevitably covers many pages in this book. Even Judith Herrin at moments admits that she cannot empathise with the fury of these debates. Did Jesus, as the son of God, have a separate and junior nature to his Father (Arian) or were they joined in a single nature (mainstream Roman)? Or did Jesus have two natures, one divine and the other human? Did Christ have a single energy and will – monotheletism, the view for a time in Constantinople and Ravenna – or two, the view adopted by the Papacy in Rome? But through this theological bramble-hedge of what Bishop Burnet in Scotland once called ‘most entangled scrupulosity’, there bursts the figure I take to be pretty much Judith Herrin’s hero: Theodoric the Goth. 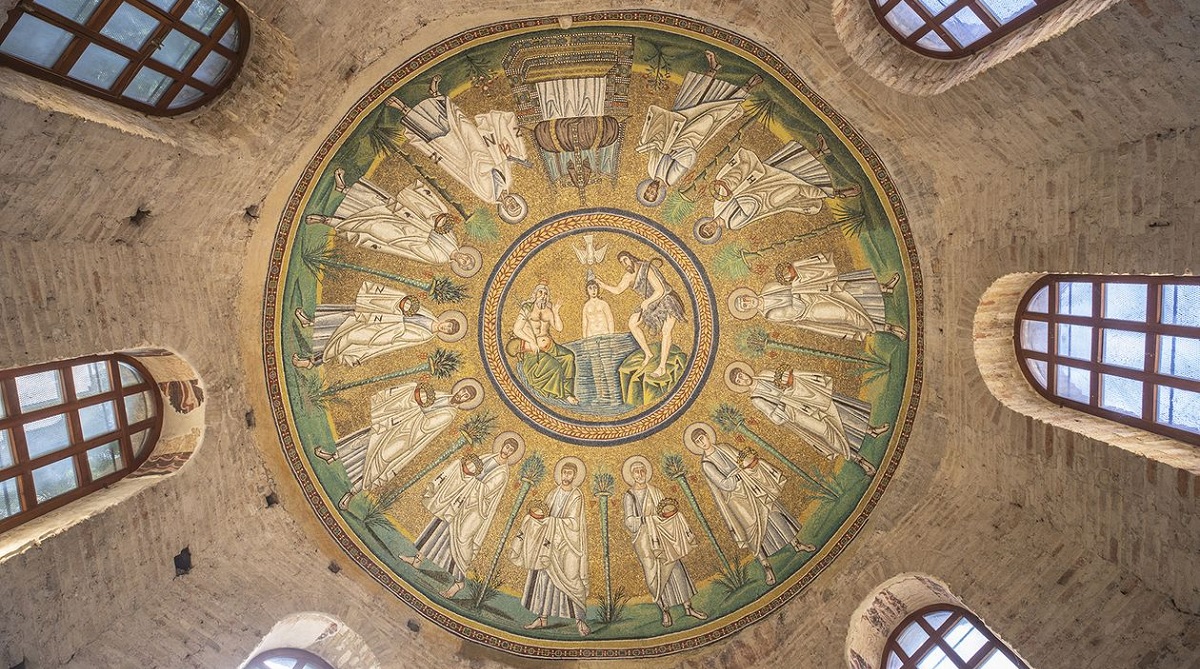 The Arian baptistery at Ravenna, built by Theoderic, who ruled as ‘king’ of northern Italy from Ravenna. Photo: Kieran Dodds

Theodoric, born in what is now Hungary but educated as a hostage at the imperial court in Constantinople, returned to his Gothic people determined to win a space in the empire for them by negotiation as well as by force. After conquering northern Italy, he ruled as ‘king’ from Ravenna, where Goths with their Arian faith settled in as a respected minority. His court flourished; he raised majestic buildings, such as the palace-church of Sant’Apollinare Nuovo; he supported the philosopher, translator and inventor Boethius. Herrin calls him ‘emperor in all but name’ and concludes that ‘Theodoric’s rule… transformed the fifth-century period of Roman collapse into a new period of early Christendom under the aegis of Constantinople.’ As a lawgiver, he insisted on tolerance and mediated in heresy disputes. Only at the end of his reign, in the 520s, did his reputation for fairness fracture when he had Boethius condemned and murdered for imagined plotting.

Toleration evaporated after his death, as the emperor Justinian set out to suppress Arianism. When Theoderic’s wise and moderate daughter Amalasuintha was murdered, Justinian sent his general Belisarius to reconquer the west and (in 540) to evict the Goths from power in Ravenna. The city would stay under the control of Constantinople for the next two centuries, and remained ‘a thriving stronghold’ through the long ordeal of the Lombard invasions of Italy, which began in the late sixth century. For Herrin, the way it created its own civil and military institutions makes the city ‘the prototype of an Italian city state, a model for the later development of Venice and other north Italian republics’.

But it was Pope Stephen II in Rome, rather than Ravenna’s leaders, who touched off a fundamental reorientation in European history by inviting the Franks to intervene against the Lombards in 753. This new north-south alignment was to culminate at Christmas 800, to the horror of the rulers in Byzantium, in the crowning of Charlemagne in St Peter’s as ‘Emperor of the Romans’. Charlemagne was an admirer of Theodoric’s legacy, visiting Ravenna several times and modelling his palace chapel at Aachen on the octagonal church of San Vitale. But with this fateful and long-lasting entanglement between papacy and European emperor, which would endure for a thousand years, the specialness of Ravenna as an independent survival of classical order came to its end.

Among many other insights, Herrin’s Ravenna provides lessons in how imperialism forms and in the suppleness of possessing classes as they struggle to retain power and property in times of upheaval. Ravenna is not always an easy read. Professor Herrin’s passion for illuminating detail can bewilder the reader: on two pages I counted four different quarrelling Ravenna officials all named ‘Theodore’, while the degree of heresy committed by Theodore of Mopsueta and Theodoret of Cyrrhus is not too transparent either. But the gorgeous, plentiful illustrations help the reader to grasp the sheer scale of Herrin’s triumphant history. This book is a masterwork of scholarship and sharp intelligence.

Ravenna: Capital of Empire, Crucible of Europe by Judith Herrin is published by Allen Lane

This article first appeared in Issue #231, People, Power, Place. Subscribe today to support independent media and get your issue hot off the press!