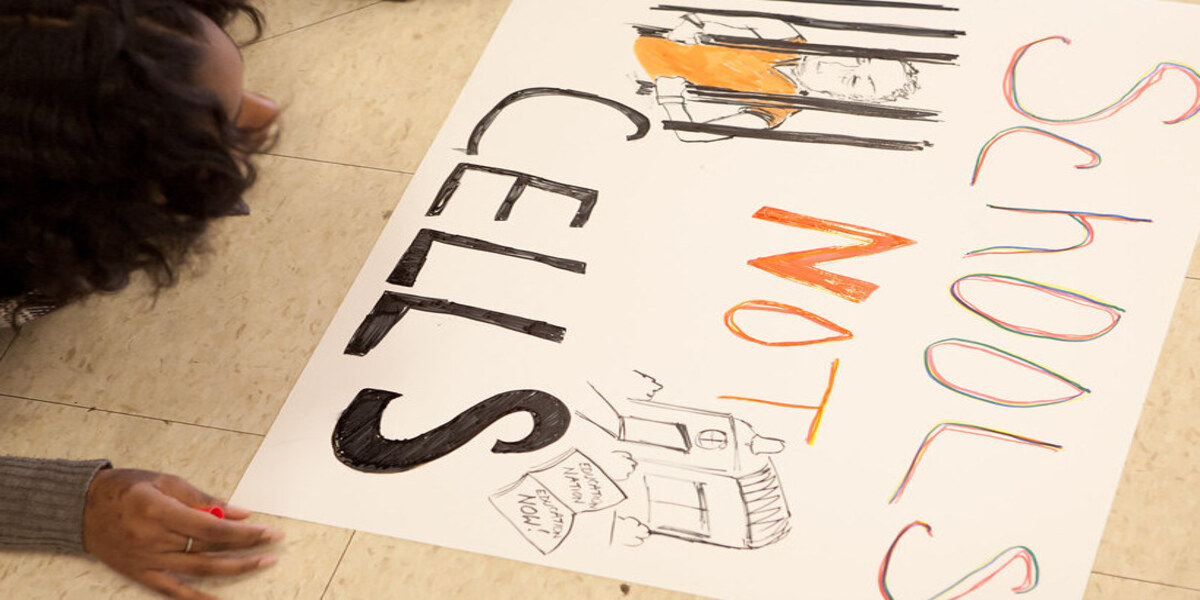 “Youth Rally for Education” by wearemodeshift is licensed under CC BY-NC-SA 2.0

The school to prison pipeline in the UK is evolving along a similar trajectory to that of its US counterpart. Both are rooted in white supremacy, carceral culture, school marketisation and extractive systems of educational capital based on classed, ableist and racialised power structures.

As Zahra Bei, teacher and founder of No More Exclusions (NME), puts it, ‘School exclusions in the UK are a function of racial capitalism. They serve a particular purpose in a school system chiefly concerned with docility, productivity and the extraction of grades.’ NME is an abolitionist movement led by black and brown educators who have experienced the multiple marginalisations of the education system and see ending exclusion as a step towards transforming it.

The school to prison pipeline can be understood as a process of marginalisation that begins within schools and is historically structured by the state through institutionalised racism, ableism, classism, heteronormativity and gendering. The school is a key and contested – by both young people and education workers – site of social reproduction, of both state and cultural power dynamics.

Abolishing exclusions is one way to disrupt the pipeline. A University of Edinburgh study in 2013 found that children excluded from school at the age of 12 are four times more likely to end up in prison. According to the Department for Education, exclusions are at their highest in a decade: 7,900 children were excluded in 2017-18, 42 per day. The most common reason is for ‘persistent disruptive behaviour’.

Research by the prisons inspectorate in 2016 revealed that nine out of 10 children in the youth estate had been excluded at some point. According to a 2019 Youth Justice Board report, black children aged 10-17 are four times more likely to be arrested than their white peers. Furthermore, 49 per cent of children and young people in custody were black and minority ethnic (BAME) – double the proportion ten years ago) – despite making up just 18 per cent of the overall population. The disproportionality in exclusion, arrest and incarceration for BAME young people lays bare the racism at work in forging the school to prison pipeline.

Gypsy, Roma and traveller children have the highest school exclusion rates. Mixed white and black, and black Caribbean children are excluded at a rate of three times that of white pupils. Children with special educational needs accounted for nearly half (45 per cent) of all permanent exclusions in the same period. These figures do not include the practice of ‘off-rolling’ – where parents are ‘encouraged’ into removing underachieving children from schools. Between 2012-17 the Education Policy Institute identified 55,300 unexplained exits affecting 49,000 children in the UK.

‘We still see schools off-rolling traveller kids because they assume parents won’t challenge it,’ says Tyler Hatwell from Traveller Pride. ‘When children are, from a young age, rejected by one of the few opportunities they have then crime can become a tempting option.’

Marginality is multiplied for LGBT+ travellers in particular. ‘They are sometimes caught in a situation where they’re shunned by mainstream society for one aspect of their identity and are worried they’ll be shunned by their place of comfort for another aspect,’ says Hatwell. ‘Schools can often ignore or label the outcome of this anguish as “poor behaviour”.

Behaviour management systems in schools can accelerate alienation, which is why Pupil Power, founded by Aliyah York when she was just 16 years old, is working with young people to intervene. The group creates toolkits for schools to inform policies and encourage restorative justice approaches. They provide resources and materials for disadvantaged young people to be able to ‘re-think the 21st-century education system’. ‘The education system has been set up by people, is controlled by people and therefore the things we experience and go through are due to the actions of those who are in power… Change is possible!’ says York.

Karen Graham has looked at how school routines, spaces, practices and punishments prepare working-class men for prison. For Graham, the logic of removing five disruptive pupils to safeguard the rest, relies on accepting the system as it is. ‘Until educators re-think whether what they are doing for those other 25 to remain is good, I don’t think that you can persuade them not to send the other five out.’

For her, the entire purpose of education and the role of teachers needs transforming; ‘You can get people to do anything if they believe that the core reason that they are there is valid. I still believe in being a teacher but we need to dismantle what it means to be a teacher in education.’

A key accelerator in the school to prison pipeline is the presence of police. In an effort to tackle ‘serious youth violence’, the Tories want more officers in schools. An additional 20 will be posted in Greater Manchester alone. Kids of Colour (KoC) youth platform founder Roxy Legane says: ‘A school-based police officers will accelerate issues that are perhaps behavioural into criminal issues. And even if a young person is not arrested, I have no doubt the threat will be a key tool.’ KoC and the Northern Police Monitoring Project are teaming up with teacher trade unionists to create a ‘Greater Manchester Wants Police Free Schools’ campaign.

Disrupting the school to prison pipeline requires dismantling the logic and structures of school and prison as ideological institutions. The experience and organised agency of teachers and young people in this process is vital. The pipeline is part of a dominant belief system of values that people reproduce daily. Who we believe is deserving of exclusion can eventually lead to who we believe is deserving of prison.

To undo prison culture, we need to reverse exclusionary, utilitarian, capitalist culture. School is not the only point of departure or site of intervention for this process but it is an important one. As both schools and prisons face greater ideological and physical mergers with the Tories’ ‘secure school’ programme, it is urgent for the young people most targeted to lead resistance and define the world they want to see. Organisations that centre the most marginalised, treat them as educators rather than subjects, and bring them – young and adult – together, like Pupil Power, Traveller Pride, Kids of Colour and No More Exclusions, are leading the way.

Ewa Jasiewicz is an organiser with the National Education Union. This article is from our Climate Revolutions Summer 2020 issue – out now! Subscribe here