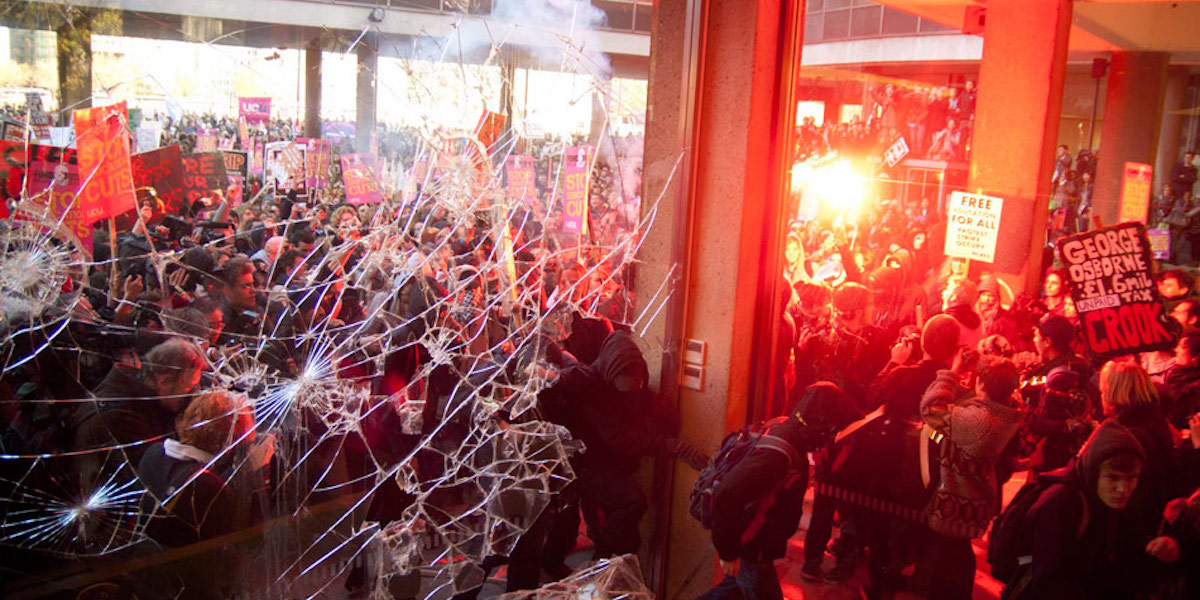 It’s been ten years since we stormed Conservative Party Headquarters at Millbank over tuition fees and the abolition of the Education Maintenance Allowance. I was arrested days later at around 7am. Two officers and a detective came into my bedroom while I was just waking up to start my day. I had been arrested before, at another anti-cuts demo in Manchester, for ‘failing to remove a face mask’. This time, I was accused by several right wing media outlets of having organised the ‘riots’. A Tory councillor wrote that I should not be employed. The right-wing commentariat had a field day. I was charged with violent disorder – a public order offence which carries a sentence of three to five years – and put on bail for several months.

I have no regrets.

We would become the first generation worse off than our parents since the 1880s; whose lives would be defined by precarity and uncertainty; who would be riddled with debt and struggle to buy homes or live in affordable, good quality housing. We would become a generation that grew up with the promise of stagnant wages, zero hour contracts, and crappy pensions.

But we were also the anti-austerity generation, the generation that fought climate breakdown, the arms trade, the fictitious, fear-laden ‘war on terror’. We were the kids of the 2003 Iraq war, that marched against the bombings in Gaza, for the closure of Guatanamo Bay and Abu Ghraib, and against extradition.

While it was not a moment of its own making, the raucous carnival that ensued outside Tory HQ on 10 November 2010 was the fever pitch of years of student struggle. For just that lucid moment, the ruling party HQ was our patch. We had made it: the youth, united; perplexed, individual Tory party workers overwhelmed by the collective power of high school and uni students. We were the many, they worked for the few. The reclamation of this space of power, with anti-government placards, thumping music, chanting, was a beautifully democratic expression.

It is difficult to describe the affective power of that day, the ‘feeling’ of making history – and that is no exaggeration. Millbank was formative and it was radicalising. Many of the seeds of today’s radical left, around climate, around Corbyn, around Black Lives Matter, around workers’ struggles in the gig economy, around independent left media, and more, were planted at Millbank.

While some of us may be despondent at this moment, and feel defeated after a painful year, we must remember that a new generation of students are building their own struggle – against climate breakdown, racial injustice, police brutality, migrant detentions, resurgent nationalism and the remnants of colonialism. They are angry at the blame apportioned to students over Covid-19, angry about the A-Levels scandal, and angry that university students were summoned to campuses so landlords can take their rent.

If the climate strikes and BLM are anything to go by, we can be confident that this generation will not capitulate to this administration – and we can anticipate the possibilities of a thousand more Millbanks.

Tanzil Chowdhury is a lecturer in public law. Read more about global student uprisings 2010-2020 in our upcoming print issue, out in early December – subscribe here to secure your copy!