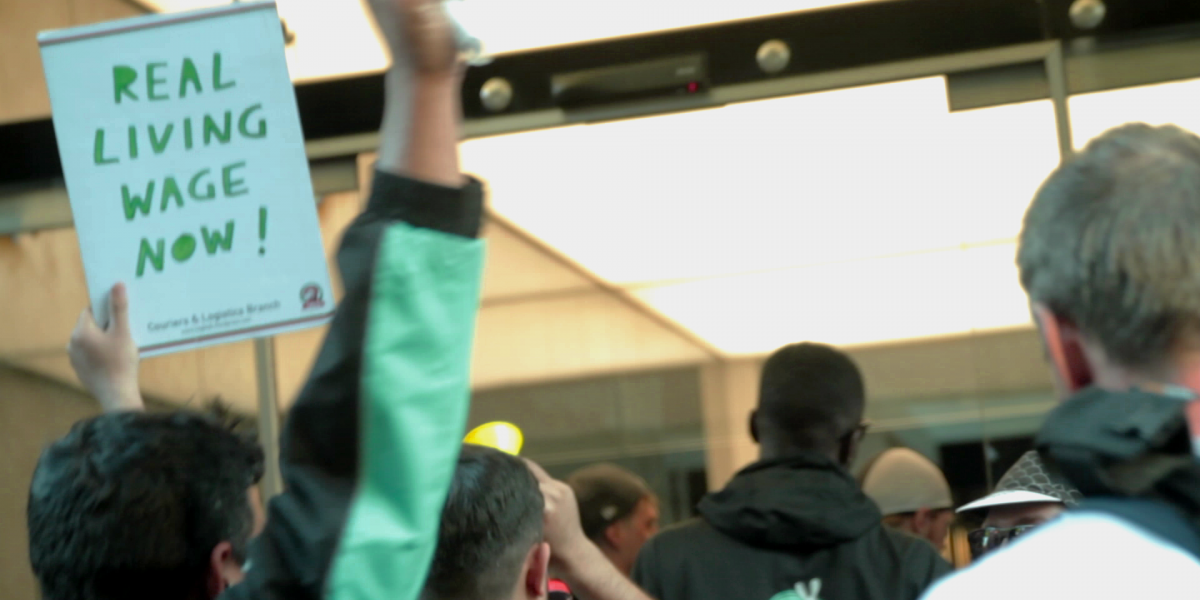 The pandemic has brought into focus the stark conditions and precarity faced by workers in the gig-economy. When the dust settles, can these workers who were at the frontlines of this crisis build a fairer future? The workers featured in Reclaiming Work believe so. This short documentary by Cassie Quarless and Usayd Younis of black & brown film features cycle courier cooperatives who offer a socialist alternative to the digital giants of Deliveroo and Uber. In fact, La Pájara, one of the cycle cooperatives showcased in the documentary, was formed following protest movements against Deliveroo in Madrid. Cooperatives like these are supported by the wider federation of CoopCycle – a ‘platform cooperative’ countering mainstream economic models of platform capitalism. This movement is the effort of workers who sought each other in the hope of a fair alternative to the rampant worker exploitation within the gig-economy.

The documentary makes clear that cooperatives and efforts like these are necessary to promote and protect worker welfare. In the words of the founders, CoopCycle works against ‘rentier capitalism’ that has led to near economic monopolisation by large companies that do not contribute but only control. The task that platform cooperatives face is to socialise a labour market which sees unfair wages and worsening working conditions under these companies. This unfairness is being challenged by workers worldwide, including by partners of CoopCycle such as Belgium’s Molenbike, Spain’s Mensakas or the UK’s York Collective. The cooperative as a model has appeared in other digital sectors such as the UK based online marketplace Fairmondo and the US based room sharing website Upandgo.

The narrative in Reclaiming Work is effective in showing the hope that these platform cooperatives represent for the workers. But there is something more encouraging in what is being achieved. There is a real path for the workers to escape the stranglehold of what can be a digital platform’s monopoly.

Beyond an obvious erosion of labour rights under these platforms there is the unsavoury misclassification of workers as being ‘self-employed’ in almost all forms of commercial digital work. Workers are fragmented as individual partners, and the platforms leave them to their own ‘devices’ whilst retaining very tight control of their daily work. The platforms retain close proprietary control of the technology involved and the data being used in providing services such as food delivery.

How does one then begin chipping away at such a digital edifice? CoopCycle and similar alternatives like them step in. They provide the critical functions which form the backbone of a gig-economy business. The main moving parts of the platform cooperative would include software, smartphone applications, mapping, insurances and building alliances with potential vendors. The technology that enables all these functions from CoopCycle is free and open for all cooperatives to use. This is essential, as the technology is at the core in bringing together cooperative groups such as La Pájara or the York Collective and even isolated workers – to connect them with customers and food vendors.

Cooperatives are funded through worker contributions which are fairly set and shared across the board. The governance of a platform cooperative is then democratic, providing not only a voice to the workers but truly professionalising work in the gig-economy and giving them control of how their work is defined. The workers here also gain true protection in the form of insurance and legal representation which in many cases the mainstream platforms have been sorely missing. For Kevin from CoopCycle, this is just the digital form of class struggle. Now technology can be used to help the workers seize the means of production and usher in a truly common good.

The road to the fair future that can be shaped under platform cooperativism is not without its challenges. Many of these cooperatives are set up under the more enabling environment of European governance and its support for a social economy model. In the UK, the mainstream political conversation veered briefly in this direction when platform cooperatives were among the proposed technological areas of focus in Labour’s ‘digital democracy manifesto’ of 2016. But the conversation has now veered back to questions over what happens after Brexit, and more pressingly, what workers in the UK’s gig-economy should expect following the pandemic.

This brings us back to the beginning of the documentary which hints to a future punctuated by the pandemic. Arguably, the issues faced by workers at the frontlines of the crisis have not changed, they have merely accelerated under the spectre of a virus. Perhaps platform cooperatives can offer a cure, but to that which afflicted the digitally controlled society years before this pandemic was even heard of. As Cristina from La Pájara muses, we can now start plotting the demise of exploitative platforms using the very digital tools that were created by capitalism. Only now they should be co-opted by the workers to socialise the industry.

Shyam Krishna is a Doctoral candidate at the Royal Holloway, University of London researching on digital labour and gig-economy practices