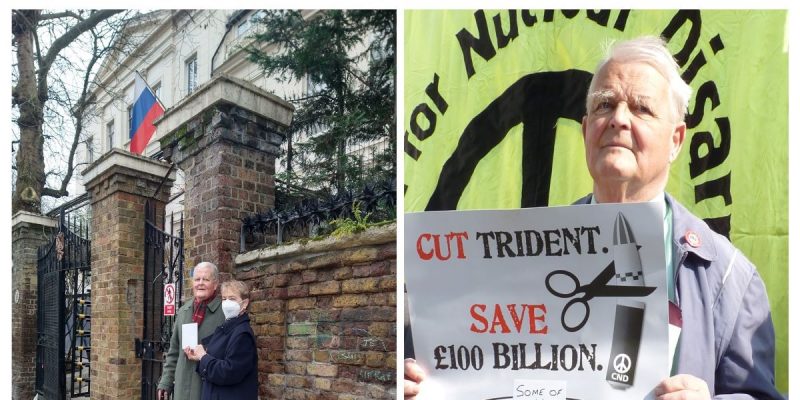 Bruce Kent led the Campaign for Nuclear Disarmament (CND) in the 1980s, when the peace movement successfully campaigned, along with the women of Greenham Common, to remove US Cruise Missiles from Greenham. He saw the supposed ‘end’ of the Cold War at close quarters. Now 92 years old, he is CND’s current vice president. Hilary Wainwright caught up with Bruce and Kate Hudson, CND’s General Secretary, as they took a letter of protest to the Russian Embassy. This is Part One in a two-part interview.

Hilary Wainwright:  Why are you here?

Bruce Kent: I’ve been so disgusted about what’s been going on that I’m glad to protest. My protest is slightly guarded because it’s clear that what has upset the Russians is partly NATO pushing right up to their borders — a nuclear armed alliance.

HW: So any settlement requires NATO to agree to Ukraine being neutral.

BK: Of course. Look at a map. We have to remember that it’s only about two months since Poland refused a whole lot of refugees coming out of Belarus. It’s not as if all the goodness is on one side.

HW: What do you think Britain should be doing?

BK: Opening up to discuss, with all peace-minded people, what the possibilities are — not just sending weapons. We must be much more open to dialogue with people in Russia and less demonising of Putin. You’d think he was on his own. When you compare him with Donald Trump, he’s in the same class. He’s not unique. There are a lot of nasty people around.

BK: Biden should start thinking about other countries where he’s got an embargo — Venezuela, Cuba, and other places. The first thing in the United Nations Charter preamble is to save the world from the scourge of war. Biden is leading a country that spends more on weapons than anybody else. He’s not my hero.

HW: The UN is pretty much in the hands of the US. Does it have any role in this situation?

BK: The UN has an important role in public education. I do a lot in schools, but I have yet to find a school with a copy of the UN Charter in the library.  I’m involved in the church but I’m yet to see a church porch with a copy of the UN Charter and preamble pinned up. The UN is almost a foreign country to most people here. It’s never referred to.

The UN could call negotiations. The UN Secretary General could go to Ukraine to show solidarity. There are lots of things it could do. But public ignorance about the UN is why we are where we are.

Most people living in NATO countries are probably quite hesitant about what’s happened and how we got here. The UN has to speak to the populations and say: ‘What do you think we should do?’

HW: As somebody who’s been supporting the UN for so long — although critical of its existing organisation — would you be calling on the UN to convene a negotiating forum?

BK: Certainly. Immediately — and see who refuses to come. Apparently, there’s talks going on between Ukraine and Russia, but it should be a UN initiative.

HW: Do you think Russia should be expelled from the security council?

BK: The whole security council needs to be looked at, not just Russia. What’s special about the security council? Why did they ever set up a veto power? It means you can’t negotiate — and yet that was part of the original charter of the UN. [The UK] agreed to it. Why? Because we wanted to have a veto as well.

HW: Were you surprised at the size of the protests in Russia?

BK: I was really astonished. The courage of it is incredible. Last night they had a chap talking very boldly to the camera in Moscow about the wickedness of what Russia was doing. He was in front of a picture of a man who was shot seven years ago for a protest meeting. What courage – much more than I’ve got.

I’ve been there several times. Their peace committee was quite influential. They weren’t all biased but they were very government-directed. I remember going there when there was a little dissident freedom committee. I was with the official peace committee and said: ‘I’ve got to go now because I’m going to this other lot.’ They said: ‘What, you can’t be.’ I said: ‘I am.’ [The dissident committee] weren’t all that radical, but they were critical of some aspects of Soviet positions.

HW: How can we give solidarity to that courageous movement?

BK: I see it here on these posters stuck up outside the Russian embassy, all critical of Putin – I think that’s a kind of solidarity. I think it’s very important that people like us, who are sometimes caricatured as Russian stooges, are making criticisms of what’s going on. It’s impossible. [Keir] Starmer went on the other day about how we were all pro-Russian.

HW: We, the peace movement?

BK: Yes. It was quite extraordinary.

BK: Who is he appealing to? What does he think we are? I think grassroots education is the key thing that we need to be on about, because people have no idea what CND or Campaign Against the Arms Trade are, or what’s been achieved in the past.

HW: What’s your fear about the use of nuclear weapons in this war?

BK: My fear is that someone like Putin gets a very bad message from somebody —that his troops have been attacked or something, and he just has a blitz moment and says: ‘Let’s do it.’ He has no control over what happens. That is the most frightening thing.

HW: Could NATO declaring Ukraine a no fly zone for Russian planes be such a trigger?

BK: Yes. It would be so dangerous – if Russian planes flew over Ukraine and they were shot down, what then? That would be a declaration of war.

HW: You’ve been through many moments when nuclear war has felt like it’s on the horizon, contexts like the Cuban missile crisis, or the 1980s. How does this compare with those moments?

BK: I’ve never previously felt that a nuclear war was actually likely, or possible, even in all the crises like Cuba and elsewhere. This is a very critical moment, especially when you see how much power is in the hands of one man. Last night on television Putin had two generals next to him — great big puddings — nodding at what he was saying. Very frightening. I can see no justification for pushing Ukraine into NATO. NATO is the forward arm of the western alliance, and we should realise that and back off.

We need to negotiate another structure entirely which includes Russia. Call it the European peace forum or something.

BK: Something like that. To just to go on pushing Russia will lead to disaster.

HW: How can we show the anti-war movement in Russia that we are with them, strengthen their morale, and put pressure on the authorities against the brutal repression of these peace activists?

BK: It’s clear that there is some access to western media in Russia. They are getting something. I think we need to promote [the protests] and congratulate them on their courage. Gradually some of the western media is doing it. Though, in general, the western media has been behaving like a press office for Biden, as if the existence of NATO and its [harmful] functions was irrelevant. It’s incredibly relevant.

Stay tuned for Part 2 of this interview, published tomorrow (15 March), in which Kate Hudson discusses how CND are building solidarity with the Russian peace movement.