Prossy Kakooza and Siobhán McGuirk report on the recent Anti-Homosexuality Act passed in Uganda, and the UK’s own draconian approach to LGBT asylum seekers. 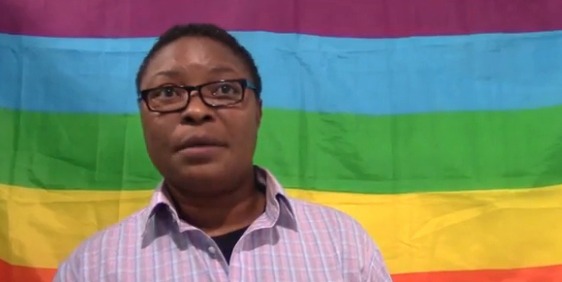 Aderonke Apata, who was granted leave to remain in the UK 2017 after a 13-year battle

Being Lesbian, gay, bisexual, or transgender (LGBT) is dangerous in many parts of the world. Every day, millions face persecution for their non-conforming sexual or gender identity. In more than 70 countries, being LGBT is a crime, punishable by imprisonment, flogging, and fines. In five countries, and certain regions of two more, it is punishable by death. Sadly, those numbers are on the rise. Over the past six months, Russia, India, Nigeria, and most recently Uganda have each enacted new laws to persecute LGBT people, and in some cases, their allies.

Prossy is Ugandan. She is also a lesbian. As far as she can remember, there has always been homophobia in her home country. She grew up surrounded by it. It was a preaching topic in church, a theme at school parades, and a focus for preachers and politicians alike. The LGBT Ugandans Siobhán works with share similar memories. They, like Prossy, fled home as leaders there capitalised on people’s latent fears, deepening their hate, and making homosexuality the social and political issue of the day.

Ugandan President Yoweri Museveni has been in power for 28 years, an eyebrow raising period of time in a supposedly democratic context. His legacy is one of broken promises and increasing social strife. Many Ugandans though Museveni’s time was up, that nothing could distract the population from the corruption, cronyism, and social inequality his government now represents. They were mistaken.

He has followed the lead of some MPs – such as David Bahati, whose profile has risen sharply since he first tabled the Anti-Homosexuality Bill in 2009 – to exploit widespread, latent homophobia, and say something the majority would subscribe to: LGBT people are a menace to society and must be imprisoned.

Adding a veil of legitimacy to this draconian ideology, Museveni tasked researchers to find ‘scientific evidence’ that homosexuality is a product of nurture, not nature. The document prepared by his handpicked team did not initially prove this, concluding that evidence either way was inconclusive at best. The report also noted a long history of non-normative sexuality in Africa, refuting the popular claim that homosexuality is a ‘western import’. This did not stop Museveni’s National Resistance Movement party, however, which promptly misrepresented the findings. Behind the scenes, a new team was assembled, and a longer document produced. This, unsurprisingly, was more in keeping with the government’s agenda.

Armed with ‘evidence’, Museveni signed the Anti-Homosexuality Act (AHA) into law, live on television. This is extremely unusual, as legislation is normally signed behind closed doors. Yet, surprisingly, few have regarded the AHA with scepticism, or asked bigger questions of a government clearly scapegoating a minority, marginalised population for a litany of social ills. Along with other morality-based laws, such as the Anti-Pornography Act, Ugandan legislation is becoming increasingly conservative, punitive and patriarchal.

Brave LGBT-rights activists in Kampala are challenging the constitutionality of the Act. Meanwhile, allies in the United States are taking Christian Pastor Scott Lively to task over his role fuelling hate speech in Uganda and petitions to cut aid to the country circulate online.

While these efforts might eventually see the AHA overturned, thousands of LGBT people are in imminent danger. National newspaper, Red Pepper [no connection to our publication, see our statement below] recently ran an incendiary article ‘outing’ suspected LGBT people, and fuelling homophobic mobs. Politicians are roundly celebrating the Act.

A similar pattern is emerging elsewhere in Africa. As a result, more and more people are fleeing their countries of origin to seek safety in ostensibly tolerant countries – those where leaders are denouncing anti-gay laws, such at the United States and the UK Deputy Prime Minister Nick Clegg called the AHA, ‘an abhorrent backwards step for human rights’. LGBT people would be excused for expecting sanctuary in the UK, a signatory to the 1951 United Nations Refugee Convention. They face a harsh reality, however, and an impossible task: ‘Prove that you are gay’.

The UK first recognised persecution of sexual and gender orientation as the basis for granting asylum in 1999. However, suitable training on the particular needs of LGBT claimants was not forthcoming. Case owners – the Home Office representatives who deal with asylum seekers – were not equipped to make informed decisions when adjudicating claims. With little available information on country conditions regarding sexuality and gender non-conformity, decisions were based on subjective, often stereotypical ideas about LGBT people, and hugely inconsistent.

The Home Office has repeatedly announced measures to improve the system, yet serious problems remain. It is extremely difficult to win asylum on the basis of a persecuted sexual orientation and gender identity. In 2010, gay rights charity, Stonewall, found that the denial rate of people seeking asylum on the basis of persecuted sexuality or gender identity was as high as 98 per cent, compared to 73 per cent of all other claims.  Claimants are routinely disbelieved, and regarded as guilty until proven innocent.

Legally, asylum seekers should be provided with housing and a small stipend while their case is assessed, yet immigration detention is widespread, with eleven percent of asylum applicants detained. Privately run detention centres are ill prepared to cater to a multi-cultural, multi-lingual population with complex needs. The treatment of detained asylum seekers is so dire that numerous deaths in custody have been reported, and hunger strikes are common. For LGBT people, detention can be particularly harrowing: Trans people are frequently segregated according to their sex-at-birth rather than gender identity, and homophobia persists among detainees and staff.

Interviews are likewise unnecessarily disturbing. Asylum seeker members of the Lesbian Immigration Support Group (LISG), a volunteer social support group based in Manchester, say that lack of privacy at the initial interview makes them extremely hesitant to reveal details unknown parties may hear. Some have previously suffered homophobic persecution at the hands of uniformed state representatives. Nearly all will have previously made considerable efforts to conceal or deny their same-sex desire or gender identity. Yet here, they are expected to immediately open up, trust, and ‘come out’ to the strangers investigating their claims.

Claimants’ feelings of nervousness, distrust, shame, or fear, are deemed unacceptable excuses for hesitancy or errors in recounting their experiences in detail. There is no second chance, and details remembered at a later date can negatively affect a case: Adjudicators presume the claimant must be lying.

This process is particularly difficult for women. Many mothers have explained to LISG that they do not feel able to reveal their sexuality in front of their kids, as they are expected to do at the initial interview. In any case, being a mother appears good grounds for rejecting a claim. The sadly common notion that a lesbian would never marry a man due to social pressure to conform, or have a child, disregards high incidences of forced marriages and rape in so many parts of the world. It also denies bisexuality.

Other reasons for refusal heard at the LISG include: ‘The applicant has been in this country for a couple of months and haven’t visited any gay bars’ and, ‘The applicant’s answer that she uses contraception is indicative that she is not a lesbian, because she would not have any use for it otherwise’. Evidence cited by the Home office as proving a claimants sexuality include ‘how/when the person first became attracted to the same sex’; how the person reconciles their homosexuality to their religious beliefs; knowledge of the legal status of homosexuality in their country of origin and whether they have had any ‘contact with the gay community in UK’.

These are as offensive as assuming that all women should be buying make-up and know their waist measurements; that all black men should be visiting reggae clubs and be invested in the ‘black community’; that all straight people should know when and how they became attracted to the opposite sex, and have precise knowledge of their legal rights as heterosexuals. Such ideas are detached from reality, and reduce complex lives into stereotypes. Defenders of the current system ask: What do you expect the Home Office to do?

How else can it determine these cases? Their presumption is that, as national press and politicians tell us, the majority of asylum seekers are trying to hoodwink the system. In reality, it is the UK that is hoodwinking the asylum seekers: announcing itself as a safe haven, but at best, a limbo. For those detained, abused, refused, and deported, it is another kind of hell.

Prossy Kakooza is Ugandan asylee in the UK, and volunteer at the Lesbian Immigration Support Group (LISG) in Manchester. Siobhán McGuirk is a Red Pepper Commissioning Editor and currently carrying out PhD fieldwork with LGBT asylum seekers in the USA.

Red Pepper (UK) is a proudly pro-LGBTQ (lesbian, gay, bisexual, trans, queer) publication. We are in no way connected to, or affiliated with the Ugandan newspaper which shares our name. We are horrified over their activities, just as we are despairing of the political and religious leaders in Uganda who have backed the 2014 Anti-Homosexuality Act. New laws persecuting homosexuality – such as those in Nigeria, India, Russia to name but three – are not products of debate over culture, science, or sexual morality. They are designed to scapegoat minority, already marginalised populations and distract attention from corruption, cronyism, rampant social inequality and exploitation of the poor at the hands of the wealthy and powerful.

We at Red Pepper believe that everyone – regardless of their sexual or gender orientation and identity – has the right to live free from fear and harm.

We condemn Red Pepper Uganda for repeatedly publishing the names of people their editors have decided are homosexual. This is not ‘journalism.’ To name, shame, and seek to bring harm to members of society are actions simply designed to fuel hate, and sell papers. Red Pepper Uganda are promoting, endorsing and celebrating violence against people who have done nothing that calls for censure. It is a sickening move.

We support the activists and advocates opposing the Anti-Homosexuality Act both on the ground in Uganda and from safe havens overseas, and join calls for the Ugandan parliament to reconsider their decision. We likewise support LGBTQ rights activists the world over, who are seeking the right to live and love as they choose, free from state-sponsored persecutions and social stigmatisation.