When Nelson Mandela came to Britain, the one place he visited beyond Westminster and Buckingham Palace was Brixton – and he had a rapturous welcome. Here Darcus Howe looks back at how the anti-apartheid movement interwove with the experience of black people in the UK 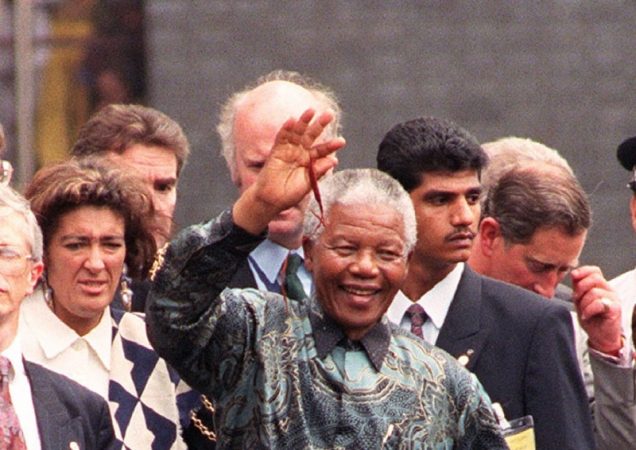 Nelson Mandela arriving in Brixton in 1996 – he was greeted by huge crowds. Photo: South London Press

I was born in Trinidad and lived there until 1962. Nothing in the curriculum of my secondary school mentioned Africa. Most of the teachers were white. Our heads were in England while our bodies were in rural Trinidad.

In Ghana 1957, Kwame Nkrumah was leading the first successful mass struggle in Africa against British colonialism. This was when Africa became part of my thoughts. Before, Africa had meant backward people and an embarrassment – I just knew that we were descendants of slaves. ‘We are not that anymore. Forget it,’ was the attitude.

Each year at carnival, people normally dressed for the parade as kings and queens of England. Suddenly, in 1959, one band leader came up with the theme ‘Back to Africa’. People didn’t know how to react. That carnival band was the first impact I saw of the African struggle.

Then began the independence movement in Trinidad, inspired by Nkrumah and the movement in Ghana. CLR James, a Trinidadian socialist and liberation writer who was my uncle, was writing to Nkrumah and forming relationships with members of the pan-African movement worldwide.

Jamaicans and Trinidadians came to the UK with a sense of being part of the changes taking place in Africa. I came in 1962. My first job was as a postman. There were trainee lawyers, university students from all over Africa. We had an anti-colonial unity. Every day we talked about being free. We were part of an international movement.

In 1969, I went back to Trinidad, working for the oilfield workers’ trade union as assistant editor of their weekly paper. I started to build a local organisation in the ghetto. A mass insurrection occurred. The army refused to come out against us and the government declared a state of emergency. The head of police said to my father, ‘Reverend Howe, the next time you see your son is going to be in a coffin.’ So I got out in an underground way, back to London.

In the Caribbean, I’d seen the power of demonstrations. When I came back to London, I suggested to the group ’round ‘the Grove’ [the Mangrove restaurant in Notting Hill] that we organise a demonstration against the police, who’d been raiding the restaurant. I wasn’t arrested at the demo, but three months later they charged us with inciting members of the public, using as evidence placards that said ‘Kill the pigs’ and the fact that someone had brought a pig’s head to the demo.

But we won, and soon after that victory, the Panthers recruited me. They weren’t vanguardists. They saw themselves as playing an engaged and supportive role in struggles, which suited my politics. At this time I was not a member of anything. I was a Jamesian.

Being a Jamesian meant I was not seeking to make the revolution. I was no leader. That was the Bolshevik model, which was good for Russia 1917, but we faced very different circumstances. I was more concerned about what was coming to the surface from below, how I could enrich it and be enriched by it. Being a Jamesian meant supporting struggles, being a resource, not trying to recruit people to your project and make yourself a leader.

Around this time, the Anti-Apartheid Movement (AAM) announced a major demonstration but there was no one from a black organisation on the platform. So I spoke to Ethel de Keyser, secretary of UK Anti-Apartheid, and said that this country has masses of migrants from Africa, India, the Caribbean. A Panther member, Althea Jones, spoke. She’d also been arrested after the Mangrove demonstration and she received a tremendous ovation. After our argument with Ethel, Anti-Apartheid courted the black groups.

If UK Anti-Apartheid organised something, I would go, but we did not organise with them. We supported the struggle in South Africa but we didn’t agree with how the organisation conducted the struggle here. We weren’t hostile, but they were quite a student-based, Communist Party-based, middle class movement. They didn’t organise in the black communities.

Through Race Today, we organised autonomously, in our own way, about what was going on in South Africa. The journal was connected to the Institute of Race Relations, which was originally founded and funded by businesses connected to colonialism. It provided a tremendous resource of African books. Radicals would come and visit, and a conversation started over whether black immigrants should participate in the institute, and whether they were being exploited by doing so. It provoked debate on who should study these people and came out of the re-evaluation of academia at the time.

When the institute set up Race Today, it began by publishing mainly academic articles on the colonial territories. It later focused on British immigration, especially the children of the first generation, from India, Pakistan, Africa and the Caribbean. After a shift on the council in a more radical direction, they appointed me, the first black editor.

We turned it into a radical black newspaper. We moved it to Brixton, reoriented the whole journal, and worked with ex-Panthers who’d squatted in Brixton, including the writer and activist Farrukh Dhondy. The intention was to be aggressively campaigning, and to ‘record and recognise’ the emerging struggles in the black community.

Race Today provided a direct link between the struggles in the black communities here and those in Africa. We got radicals from South Africa to write and to come over to speak. We did cover stories on Soweto, Steve Biko and union struggles, including organising that emerged beneath official trade union leadership. We always looked beneath the surface.

CLR James was part of a pan-African political tendency with a distinct view, focusing on what was beneath the surface. With regards to supporting anti-apartheid groups in South Africa, this meant working with dissidents in the ANC and getting in contact with the black consciousness movement. We believed the South African working class was the most advanced in Africa, however much the apartheid regime tried to break and block them. We learned critically from the bureaucratic parties in Ghana and Nigeria. These were mass parties in a sense, but they were run by small groups, and in Ghana, President Nkrumah had even expelled and in some cases jailed his radical critics. We believed that it was necessary, during the struggle against apartheid, to build a truly participatory alternative government. Not a bureaucratic, vanguard party, declaring that it knew best. This meant being critical of the ANC, and the very influential South African Communist Party, which never mobilised the mass of working people in South Africa.

There were others, such as Amilcar Cabral of Guinea-Bissau and Cape Verde, who tackled the problems of a bureaucratic vanguard head on. Cabral wrote about how to build fundamentally democratic organisations in the struggle against Portuguese colonialism. President Julius Nyerere of Tanzania was an influence on us, too. He sought to mobilise the peasantry. Like us he had certain examples in independent Africa to look at and say, ‘No, I’m not going there.’ We’d thought that because of the strong working class in South Africa, the ANC wouldn’t get away with becoming the bureaucratically controlled mass party we’d seen elsewhere. It’s an unfinished struggle, and there’s still a deep lack of democracy and widespread violence.

Significantly, Mandela’s approach to leadership did not come from the new thinking evident in the politics of Cabral. He was influenced more by the Bolshevik tradition and the South African Communist Party. Within the old apartheid system, he’d been a chief and a king. It’s very difficult to come out of that and have a politics of self-organisation. He did not think much about ideology. And there was very little debate possible in the ANC.

Brixton was the only locality he visited when he came to London as president of South Africa. We met in Brixton recreation centre. I have never, ever, ever seen Brixton in such a spirit of revolt and solidarity. The whole of Brixton shook. The Rastafarians led that. Everybody poured out of their homes. The police couldn’t police anything. We had to police ourselves.

I have never, ever, ever seen Brixton in such a spirit of revolt and solidarity. The whole of Brixton shook

I was on the platform because I was well-known in Brixton as an agitator, editor of a journal. I was on TV a lot. People thought I could have left the struggle and gone to live somewhere else and driven two cars, but I was still in the streets. I was confronting police brutality, stop and search. I was not a leader but I got a huge applause simply because I was representing Brixton and I was going to meet the man.

I was totally shocked at the strength of feeling. It expressed people’s recognition of his courage: 27 years in prison, never backing down or breaking. He could’ve done all manner of deals in prison. They certainly put pressure on him to accept positions in their government, but he just said ‘no’. This was the man who challenged the whole issue of racial segregation and brought it to an end. Old men, young women, everyone knew that and related to it. He had an international support that no other third world leader, except perhaps Mao Tse Tung, could mobilise with his presence.

And think about what he did upon release. He stopped the violence. Many people thought it could’ve ended in a racial bloodbath. Whites against blacks. Mandela steered away from that. It’s true there were a number of capitalists (Oppenheimer, etc) with whom he struck a deal once the ANC was in government. When he came out of jail, he said he would start on the road to socialism, nationalising the mines, etc, and he didn’t. There are critiques of this, and they are probably right. Levels of inequality are in some respects worse than under apartheid. The police have been killing miners. Mandela was a saint, but the reorganisation of South Africa needs more than saints.

I was overwhelmed when I met him. We talked but I hardly remember anything. It felt like what it would be like for a Christian to meet Jesus. I was so impressed by the effect of his presence on the people of Brixton. They were angry and ready to fight because they saw him as a freedom fighter. He confirmed them. He could have walked across Britain and they would have followed him.

This text came out of recorded conversations with Hilary Wainwright