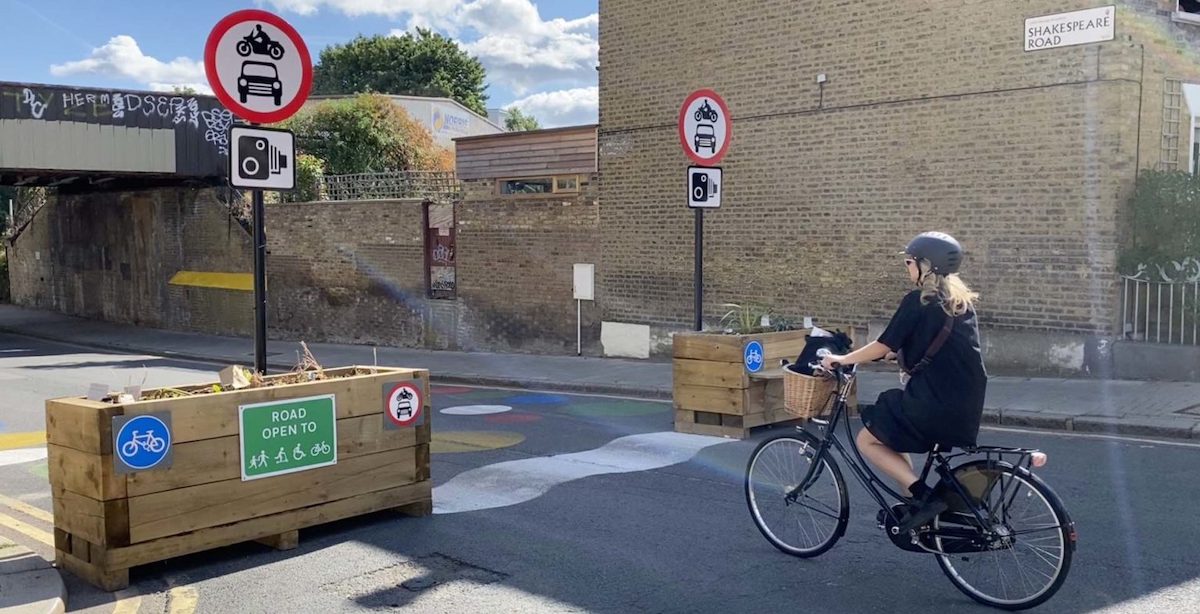 Low traffic neighbourhoods (LTNs) involve using planters, camera gates, bollards or other measures to restrict motor vehicle use in residential streets. In London, over seventy were introduced in six months of 2020. LTNs are controversial and it’s important their impacts are studied. I have summarised elsewhere my ongoing research into the spatial distribution of LTNs in London, their effects, and possible unintended consequences. More broadly, though: how do LTNs as a type of intervention fit into wider debates and struggles over public space and city transport?

Who are LTNs for?

They are widely seen as cycling schemes. This both helps and hinders them, with LTNs promoted by cycling advocates yet tarred with cycling stigma. However, the association is misleading. In Waltham Forest, people living in new LTNs did between one and two hours more walking a week, versus 15-20 minutes more cycling. A new study finds ‘emergency’ LTNs increased walking too. Newer and longer-standing LTNs show trends towards reduced car use and/or ownership.

If successful LTNs induce more walking and less driving, this suggests LTNs are mainly a way of re-allocating space from motor vehicles to people on foot. This doesn’t mean all LTNs achieve this, or that there are no downsides or unintended consequences. But it helps us locate these interventions in the long battle over the right to urban space and the position of pedestrians in the ‘road hierarchy’.

Walking has long been marginalised on our roads, with parked or moving motor vehicles taking the majority of urban road space on major and minor roads alike. The normal way of things is that pedestrians stick to the footway and cars get the main carriageway. We learn to cross with care (look right, left, right again) because we don’t expect drivers to stop for us outside of formal crossings – and not always then.

This normal way of things has particularly harmed children, who cannot travel safely without adults in car-dominated streets. Deprived of independent mobility, they are left ‘less self-sufficient, less healthy and less free’. The car society is unequal in many ways, with a steep social gradient for car ownership and use. The poor drive less, but suffer more from road injuries and other negative impacts of other people’s driving.

However, the normal way of things can change, even on one street. According to Manual for Streets, at 1,000 cars per day or fewer, pedestrians start to ‘share space with motor vehicles’. The carriageway becomes open for walking, so pedestrian space doubles or triples. Street design and pedestrian volume also shape driver behaviour, so reducing motor traffic alone may not always be enough to change driver-pedestrian interactions. But together, these factors can enable a qualitative shift from pedestrians relegated to the footway and a carriageway exclusively for car travel, to the whole street potentially as public space.

Many urban residential streets fall the wrong side of the line between driver and pedestrian priority, and LTNs can help change this. In Walthamstow Village, five of twelve count sites within the new LTN went from over 1,000 to under 1,000 motor vehicles per day (most of the other seven were already below 1,000). Where pedestrians could be anywhere, drivers take more care. We found around a 70 per cent reduction in road injury risk (including for car users themselves) within these schemes.

Restricting cars doesn’t solve everything. If affluent areas are prioritised for LTN implementation, existing inequalities in access to outdoor space could be worsened. Indeed in London we found an opposite trend, although with variation by boroughs. And in an unequal society people don’t necessarily feel welcome in public space, so we also need positive action to enable participation and usage by all.

Barcelona’s pre-Covid superblock programme is a good example of this. City planners there encouraged locals to set up games and picnic areas in newly car-free intersections or street segments. In a dense flatted city with limited green space, neighbourhood traffic reduction is about creating a wider local resource for play, socialising, and active travel, with activities also open to those living in adjacent areas or on boundary roads. As well as reducing cars, this creates something new and valuable: a shared sociability in newly public space.

The car reduction is important too, though. London’s 2041 target is to move from 37 per cent of trips by private motorised vehicle, to 20 per cent: ambitious (we’ve been stuck on 37 per cent for five years now) but arguably not enough. UK carbon reduction targets suggest other cities should be making similar or greater reductions. But we can’t reasonably make driving more difficult or expensive if the reward for not driving is being penned in on narrow footways with parked cars, cycling among lorries, or sitting behind queues of cars in stationary buses.

Travel alternatives need to be better, and so does day-to-day life. LTNs can help by opening up new public spaces as well as providing safe routes across most of our street network. Around nine in ten people live on residential streets in London, and a similar proportion of the urban road network is classed as minor.

But what about other roads?

Many feared unintended consequences of interventions on residential streets, like dangerous levels of air pollution on main roads, are longstanding and real problems that need addressing too. Main roads might not become spaces for children’s play as residential streets could be, but they could be a lot more liveable.

Some high streets could be incorporated in LTNs, but even on arterial roads, space for cars can be reduced (helping limit traffic displacement), their impact mitigated, and alternatives improved. TfL made its London bus lanes permanently operational, prioritising lower income bus users and reducing space for private cars on these strategic roads. Where there isn’t space for a bus lane, the new national bus strategy encourages local authorities to consider point closures of main roads to private cars.

Pop-up cycle lanes in London and other UK cities have helped ensure essential workers could safely commute by bike during Covid times, and some will be made permanent. City-wide policies particularly benefit busier roads. London’s Ultra Low Emission Zone extension will reduce pollution exposure hotspots for millions of Inner Londoners. It should be a first step towards a tailpipe emissions-free zone across the whole city.

LTNs in principle can open many of our roads to walking, cycling, play, and recreation, particularly benefiting those with the least private indoor or outdoor space. More should be done to ensure this happens in practice, and to deal with the unacceptable conditions on busier roads, too.

Rachel Aldred is Professor of Transport at the University of Westminster, and Director of the Active Travel Academy