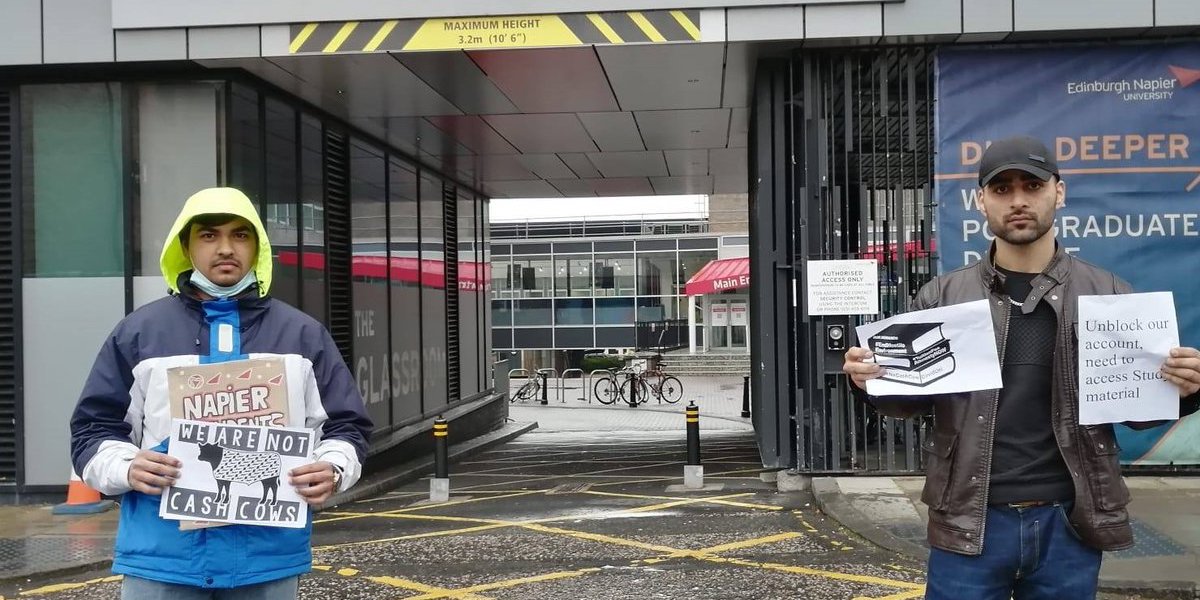 Mona*, a postgraduate international student at Edinburgh Napier University, recently contacted Unis Resist Border Controls (URBC) after her university bombarded her with messages about her failure to pay tuition fees installments on time.

The email warns that ‘If you are a Tier 4 student, non-payment of tuition fees may impact your immigration status’. It doesn’t even refer to Mona by her full name, but simply as ‘Dear Customer’.

Currently, Mona is unable to pay tuition fees. Her parents, who previously financially supported her, were made redundant due to the global pandemic. As a Tier 4 international student, Mona can only work 20 hours per week. Her part-time job helped to pay rent for her cramped room in a shared house. However, just before the first UK COVID-19 lockdown began, Mona was made redundant from her job, rendering her ineligible for the furlough scheme.

Mona has been food insecure since the start of the first lockdown, but has been too scared to approach food banks for support because of her immigration status. She is in arrears and lives in anxiety about the possibility of being evicted at any moment.

While British students involved in rent strikes rightly protest, ‘9K for What?’ their demands unfortunately fail to acknowledge students like Mona, who are exploited for tuition fees and subject to the hostile environment.

International students, particularly those who come from non-EU countries on Tier 4 student visas, pay anywhere between £11,000 to over £30,000, depending on the course of study. International students must also spend £348 for a Tier 4 visa and an additional £470 for the International Health Surcharge. The economic incentives that international students bring has driven universities in Manchester, Wales and Northern Ireland to charter flights from China during a global pandemic.

Unlike British students, international students have no access to housing support or benefits, as a result of No Recourse to Public Funds (NRPF) conditions, introduced over 20 years ago. International students also live under pernicious attendance monitoring by their universities, which are often made to share this information with the Home Office.

During the first lockdown, many international students contacted URBC for financial assistance. These students were food insecure and struggling to pay rent, many having lost part-time jobs that supported them during their studies.

To better understand the precarity international students were experiencing during lockdown, URBC and the Migrants’ Rights Network (MRN) conducted a brief study in June and found that, among the students who responded, 56 per cent were either destitute or at risk of destitution during the initial lockdown.

International students also faced difficulties receiving hardship grants from their universities, with 15 per cent rejected for these, while 36 per cent of respondents indicated that they received no response to their enquiries for support. The impact of this scenario is especially stark for those international students in precarious socioeconomic positions, particularly working class and lower middle class students who have taken out exploitative loans to study in the UK.

A call for amnesty

Compounding matters, a number of international students on Tier 4 visas have been withdrawn from their university courses and are now facing visa curtailments and possible deportations.

URBC and MRN have obtained figures on a number of UK universities and found that during the first lockdown, Portsmouth University reported 169 international students to the Home Office for visa curtailments, while Central Lancashire University reported a further 116 students.

Several universities refused to answer as to how many students they have reported to the Home Office during lockdown. These include the University of Hertfordshire and the University of East London, which has withdrawn a number of students for being unable to pay their tuition fees, putting them under threat of deportation.

On 10 August, URBC and MRN launched two letters, one addressed to Home Secretary, Priti Patel demanding an end to NRPF and the other addressed to the Minister for Universities, Michelle Donelan demanding a tuition fee amnesty for international students. Both letters received support from academics, students, union representatives, anti-racist and migrant-rights organisations.

Stephen Timms, MP for East Ham, recently expressed his support for an end to NRPF for international students in Parliament: ‘I do not believe it is in Britain’s long-term interests to force into utter destitution such a large number of those who have chosen Britain of all the countries they could have chosen in which to study, often investing their family life savings to do so. Certainly, we need the universities to be flexible and supportive to students struggling to pay fees in this academic year.’

* This is a pseudonym