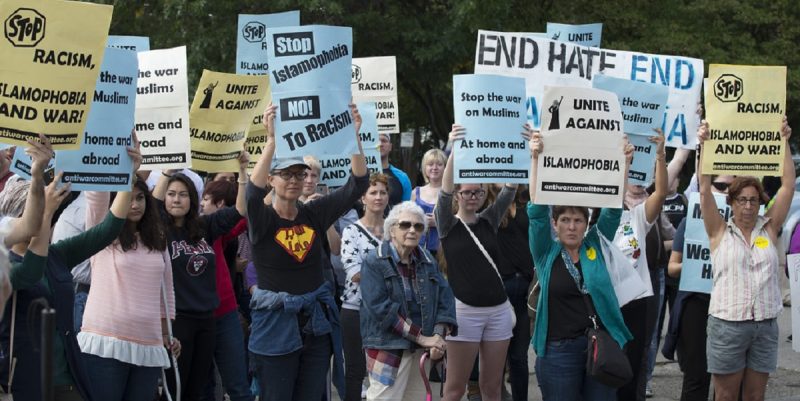 From a young age, I have witnessed the insidious nature of state islamophobia. A turning point was my experiences as a student in a Muslim majority secondary school in Luton during the 2014 Israeli attacks on Gaza.

Many of us had been deeply affected by the poor government response to the death of over 2000 Palestinians. We were angry, distressed and we wanted to understand why this was happening. What followed was the policing of that expression. I remember one classmate telling us how police officers had interrogated him in his home for simply wearing a Palestine badge to school. Another friend had been reported by a teacher to a special constable because he had been reading a leaflet on Palestinian human rights. I was still a child, but I could already see how the counter-extremism agenda was being used to repress us. By blurring the lines between political activism and violent extremism, our government is making it impossible for Muslims to express themselves for fear of being branded extremists.

The many headed hydra of Islamophobia

When we think of Islamophobia, we often think of far-right groups such as the English Defence League (EDL) and Britain First; and tabloid newspapers whose headlines have frequently demonised Muslims. It is easy to assume that Islamophobia is restricted to fringe bigots from the far-right and some sections of the media. But successive British governments, both Labour and Conservative, have been passive bystanders in the face of bigotry and active enablers in creating a climate of hatred and whipping up fear of Muslims.

Islamophobia, like other forms of racism, manifests through individual acts of prejudice and institutionally through draconian legislation which disproportionately targets Muslim communities. Islamophobia is more than just prejudice against Muslims, it has been used as a political tool to achieve both domestic and foreign policy objectives by scapegoating Muslims for society’s problems. Former Prime Minister Tony Blair relied heavily on the construction of a foreign threat and fear mongering in order to justify the invasion of Iraq. By using essentialist discourse and the ‘othering’ of the Iraqi people, he portrayed the war as a civilising mission that would bring freedom and democracy. Ultimately, the invasion would lead to the deaths of nearly half a million people.

British governments have often evaded scrutiny by presenting legislation which disproportionately affects Muslims as essential for national security. Clothed in the rhetoric of counter-terrorism, these policies have undermined our civil liberties and contributed to the increasing hostility towards Muslims who have been portrayed as a suspect community. For years, intelligence services have conducted large-scale state surveillance which has swept aside our right to privacy and freedom of expression.

By exploiting people’s fears over terrorism, our government has successively pushed through authoritarian legislation.

In 2018, Human rights advocacy group Liberty criticised the government’s counter-terror strategy for using ‘dangerously vague definitions of extremism to tarnish communities’ as well as encouraging ‘policing by prejudice’ and forcing ‘press service providers and local authorities into becoming unwilling and untrained agents of the security services’.

This has in turn emboldened the far-right and legitimised their harmful narrative which portrays Muslims as the enemy within.

Since 9/11, counter-terrorism legislation had drastically broadened the powers of the police and intelligence services. Under New Labour, a series of draconian pieces of legislation were passed such as extended detention without trial and a massive extension of national surveillance.

In 2000, the Labour government passed the Terrorism Act which allowed the police to stop and search any individual reasonably suspected of being a terrorist; to search for any evidence of their involvement in such activity. In 2003, over 32,000 searches of suspected terrorists were made yet less than 1 per cent of those arrested were actually charged with terrorism related offences. Furthermore, the House of Commons Home Affairs Select Committee highlighted the racialised dimensions of these measures, since there was a 300 per cent increase in the searches of Asian people between 2001 and 2003. This led to a disproportionate targeting of Muslims.

There have been a number of cases documenting the discriminatory nature of these laws over the last two decades of the so-called War on Terror. For example, in 2006 police fired at Mohammed Abdul Kahar during a raid on his home in London before they had even identified him. He was released without charge a week later. Another high-profile story was that of the Nottingham Two. Student Rizwaan Sabir, and staff member Hicham Yezza, were held in custody for a week without charge in 2008, on the basis of police evidence which was later found to be fabricated.

In 2010, the newly-elected coalition government acknowledged the previous government’s counterterrorism legislation was ‘a significant source of grievance within the Muslim community. However, this did not lead to the reversal of the draconian laws, they were only further intensified. By 2015, the government passed the Counter-Terrorism and Security Act, and made the controversial counter-terrorism programme Prevent, statutory duty. Public sector workers including teachers and doctors are required by law to make referrals and spot signs of ‘radicalisation’.

Guidance on what constitutes radicalisation has often been vague and the government’s emphasis on religious ideology being a key driver has inevitably meant Muslims have often been targeted simply for practicing their religion. In June 2019, organisations such as Greenpeace and the Palestine Solidarity Campaign (PSC) were featured in a Prevent guidance document which was distributed to teachers and medical staff by counter-terrorism police. This was a clear demonstration of how the Prevent agenda was being used to clamp down on dissent.

Furthermore, according to a survey conducted by the National Union of Students, one in three Muslim students felt negatively affected by the Prevent duty.

Whilst Prevent has silenced many, it has also politicised an entire generation of young British Muslims. My early experiences only increased my determination to campaign against Islamophobia. Despite the government’s best efforts, many teachers, academics and trade unionists stand have stood with Muslims by speaking out against the Prevent agenda. This movement knows all too well that the fight against Islamophobia is neither a problem limited to the Muslim community, nor a task for just one month a year. If Islamophobia has been institutionalised within every public and private space, the opportunities for resistance are present every single day from our workplaces to the nurseries that care for our children.

From disproportionate stop and search to the enactment of the Prevent agenda, successive British governments have been complicit in state-sanctioned Islamophobia against British Muslims. If we are serious about challenging Islamophobia, it is imperative upon us all to take a stand against the discriminatory laws which enable it. Furthermore, whilst policies targeting Muslims in the UK are being exported, we should insure that the same is true of struggle against them. Alas, racism is not limited to the borders of this country, and our mobilisations must remain transnational especially as we witness governments in France and Austria following the trend of Islamophobic laws and over-policing of communities in the name of security.

Taj Ali is a freelance journalist based in Luton