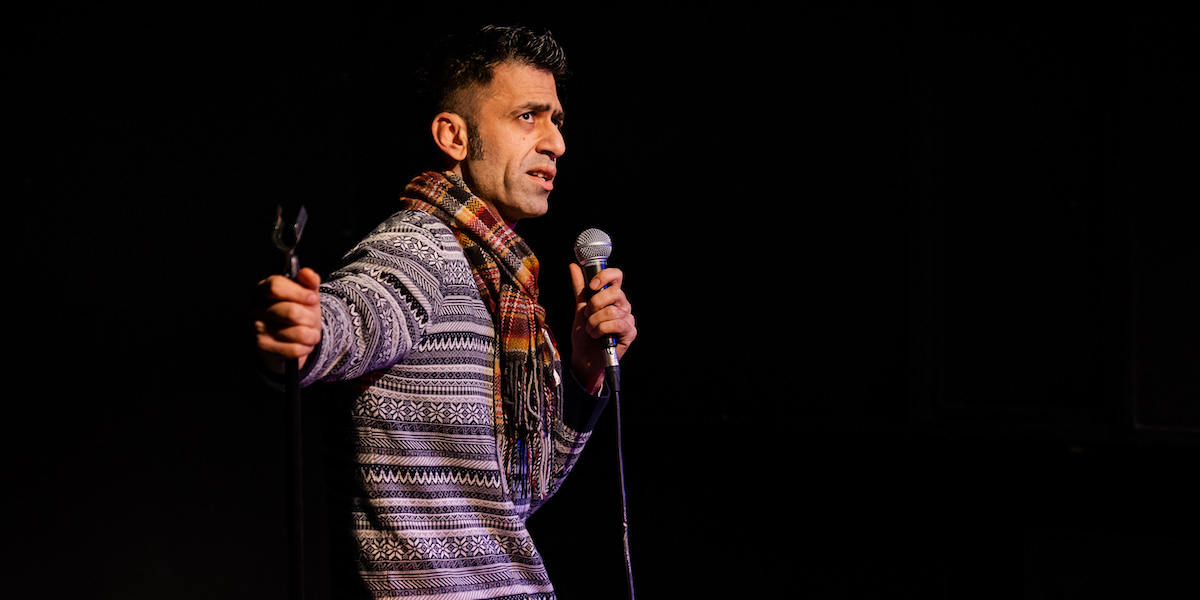 Counterpoints Arts runs No Direction Home (NDH) as part of its PopChange project, in partnership with Camden People’s Theatre and comedian Tom Parry. It provides workshops, expert tuition and gig experience to new comics from refugee and migrant backgrounds.

We are humans who have left one life behind, out of choice or hardship, and come to the UK to begin another. Our memories – the nectar of our stories – are filled with colours, smells and sounds of entirely different worlds, which meet, sometimes even clash, with the world we presently inhabit. These stories are laced with loss and pain as well as joy and hope, of course. But perhaps it is this deep sadness that draws us to comedy. Not to forget or make mockery of our experiences, quite the contrary, but to remember and connect.

As we workshop our jokes, sharpening punchlines in anticipation of having an audience, I find myself unearthing stories that had been relegated to the cobwebbed corners of my consciousness. But stand up is not only about the stories. It is essentially about the experience of being human – and the universal need for connection and laughter. Tom reminds us that stand- up ‘is not about being funny’. Our role as comedians is to ‘be who we are, share our unique perspective on life’. Over here, I am inspired to find my way back home, not to any physical place, but to the eternal refuge whence we can never be uprooted nor displaced – my own voice, my very own experience of being.

Our role as comedians is to be who we are, share our unique perspective on life

NDH is a space to show up/stand up, a space to be seen and heard, a space of celebration. We come from places of varying remoteness to the UK, some of us fresh off the back of a truck, others migrated here years ago. We hope to keep sharing the love – and our jokes.

Here’s a favourite of mine: When I first moved to the UK, people back home would ask me: ‘So what are the English like? Are they nice, funny, cold, open, polite?’ My answer was always, ‘Before or after 6pm’? You see, to witness how people transformed after a few post-work pints was shocking. Like meeting everyone’s ego and alter-ego within a span of hours. A social phenomenon I still find mind-boggling after all those years!

The authority of the mic ­– Usman Khalid

In autumn 2018, Counterpoints Arts asked if I was interested in being part of the new NDH project. I accepted – initially just to do it once. For the next few weeks, I attended workshops organised to teach the art of stand-up. One of the things that really inspired me – and due to which I am still hanging around – was the effort put in by everyone, especially our mentor Tom.

He is a very witty comedian and now a good friend. The way he ran those workshops and made the concepts and ideas so easy to grasp really deserves a five-star review. The result was outstanding. I’ve now performed at so many gigs, at Camden’s People Theatre and some other places, including the biggest one at London’s South Bank centre in June 2019.

There are so many aspects of this project I admire and enjoy. Performing in front of an audience gives you a kind of authority, which you enjoy once the mic is in your hands, although it’s always scary for the first 30 seconds. I think comedy, out of all performing arts, is the medium where the liberty of saying something is stretched to the limit. Things you can’t say otherwise you can easily talk about when doing stand-up.

During this journey, I had the chance to work with some very creative people who started out just like me but have since become very good friends – and some old horses as well. Because of them, I am still part of it, and still enjoying it.

I love participating in No Direction Home and performing stand-up comedy. I love being encouraged to find humour in everyday life, and as a chaotic person by nature, I appreciate that the sets I write can be structured the way I want them to be. Chaotically.

This time of pandemic has revealed our inherent dependence on structure. Structure is why we function, it is the reason why we get out of bed, spread jam on toast, pour milk in our tea (or pop a slice of lemon in it if you’re a posh Earl Grey drinker, or an eastern European, or both) and get on with our day. Structure is what ensures we tick through our long to-do lists and remain utilitarian members of a society. Oh wait, that’s capitalism.

I am in the privileged position of being grateful for many things during lockdown but I am mainly grateful for the comforting message coming from our governments. They have led by excellent example, confidently showing us that in times of crisis it is okay to be a little bit shit. It is okay to procrastinate and avoid the main task at hand only to arrange your spices in the cupboard alphabetically or to look up how to grow papayas from seeds. It is a perfectly normal human response when faced with a daunting, complex and urgent job.

Our governments have led by excellent example, confidently showing us that in times of crisis it is okay to be a little bit shit

I am so happy that the Polish leaders have been taking this comforting message seriously and that they have distracted themselves with any number of things rather than manage Covid-19. They have discussed tightening abortion laws yet again (can’t get bored of that one!), debated whether to allow children to participate in hunting, and pushed for a somewhat illegal presidential election this May.

I feel truly comforted in the knowledge that my own messy, pathetic, unorganised self under lockdown has been legitimised by the heads of my country being appallingly shit.

Stand-up is an outlet – Selam Mengistu 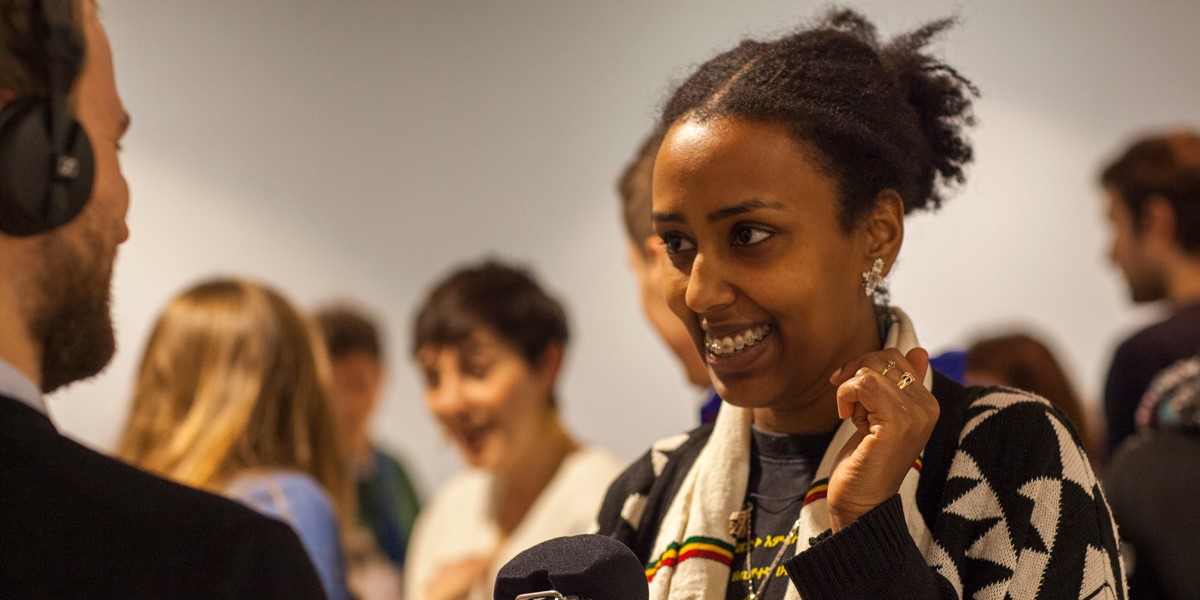 Comedians are said to be more likely to suffer with mental health issues. Having struggled with an anxiety disorder myself, attending an NDH performance proved to be life changing. I was inspired by the confidence I saw in what would have been these comedians’ first gig. I felt compelled to give stand-up a go.

Cognitive behavioural therapy outlines doing activities outside one’s comfort zone, and so my quest to conquer my fears began – cue stand-up. Comedy became an outlet. The terrifying moments before performing are replaced by an addictive high, a positive can-do attitude that leaves one reeling in ecstasy.

Here’s a bit from my set. Being a second-generation Ethiopian, I have a love-hate relationship with my name, Selam, which means ‘peace’. Ethiopians are notorious for greeting other Ethiopians they see on the street. Their chosen greeting? ‘Selam!’ which is also synonymous with ‘’Ello there mate!’ Strangers are constantly calling my name. I’m a social introvert! It’s a minefield.

Ethiopian parents also like naming their kids based on whatever is happening at the time. So basically, a lot of Ethiopian kids born this year are going to be called Ejehen Tatebq (‘Did you wash your hands?’).

You have to tell uncomfortable truths – Edin Suljic

Now, how about this one: ‘And for our next stand-up act we have a refugee and an asylum seeker from…!’ Yeah, sure! You nearly pulled it off. These comedians, they will joke about anything.

But NDH really is a whole bunch of comedians from refugee and immigration backgrounds, all under one roof. In the typical spirit of immigrants – where no job is too small and no opportunity should be missed –ruffians of all sorts and backgrounds willingly took an offer to play Fools.

We all have our individual take on ‘being funny’. But being funny or telling jokes is not what the Fools do. Not even when the audience is laughing. That’s what my mate Shakespeare, a bingo addict, told me over a glass of cheap brandy. A professional Fool, clever and sharp, provides social commentary on pompous social tendencies. He is satirical, political, with a healthy scepticism towards people in positions of power.

Just as Fools get their pay by being kicked in the arse or hit by a stick, stand- ups get their pay by telling jokes about their own shortcomings, inadequacy, failures, and bewilderment with the way things are. We are in perpetual mourning over the state of the world, and the misery of the downtrodden. We live in an age of eroded privacy and free speech, of political correctness. Following the official line for fear of losing jobs or being excluded. No rebellious, independent opinions; no anti-conformism. So the comedians and the Fools must speak openly.

The true reward for comedians comes as their own private chuckle over a pint and a plate of cheap grub, reflecting on how many uncomfortable truths they managed to smuggle between the laughter. Moliere’s Misanthrope lives in the heart of each stand- up.

And when the audience, on the way home, starts reflecting on those jokes, getting upset, angry even – ‘How dare they? Ungrateful sods!’ – the true work  of a comedian has been done.

Yasmeen Audisho Ghrawi is a performer, writer and theatre- maker from Baghdad

Usman Khalid is a Refugee Week ambassador for Counterpoints Arts

Selam Mengistu is the founder of Azmari Bet, a grassroots initiative that celebrates Ethiopian culture and provides a platform for emerging entertainers

This article first appeared in Issue 228 – subscribe to Red Pepper to get the scoop first!