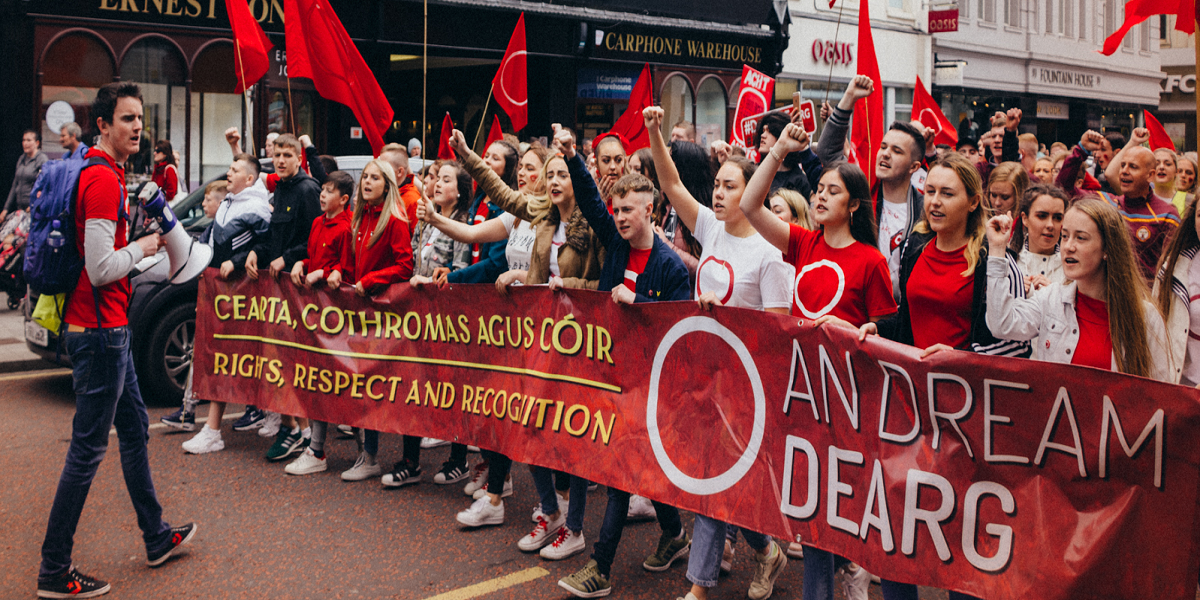 As we approach the centenary of Northern Ireland, one thing we can be sure of is that official ‘celebrations’ will be absent any mention of the century-long state-sponsored suppression of the Irish language.

To be clear, suppression of the Irish language did not begin with the Unionist one-party regime, which gained control of the six county ‘state’ following the partition of Ireland in 1921. Rather, it formed a core component of a longer process of colonisation in Ireland. As would prove the case globally, the English conquest promoted the obliteration of native culture.

After two centuries of such cultural imperialism and in the wake of the catastrophic Great Hunger – which led to the death and emigration of millions of mostly Irish speakers – by the late nineteenth century the language teetered on the brink of extinction, confined to remote and rural areas, mostly on the west coast of Ireland. By 1901 it is estimated that only 15% of the population spoke Irish, a figure declining at a rapid pace.

Ironically, when Irish appeared at its weakest, efforts to decolonise Ireland through the reclamation of native language and culture ultimately helped fuel the island’s political revolution. As Pádraig Mac Piarais, one of the most high profile leaders of the republican movement and a leading language activist, famously stated; ‘When the Irish League (Conradh na Gaeilge) was formed, the Irish revolution began.’

Given the affinity between the language movement and republican revolution and in the context of three centuries of colonialism, the new Northern Irish state proved a cold house for native culture, continuing and indeed accentuating the denigration of the Irish language.

This colonist and supremacist mentality remained embedded in the northern polity’s very structure, finding fullest expression in the permanent Special Powers Act. (The Justice Minister in Apartheid South Africa would later famously say he would trade all his powers for just one clause of this legislation). The Act gave sweeping powers to the authorities to ‘take all such steps and issue all such order orders as may be necessary for preserving the peace and maintaining order’, and which facilitated the forcible prohibition of any activity deemed a threat to Unionist domination.

Northern Ireland’s first Education Minister saw the removal of Irish from the curriculum. The Unionist MP, William Grant stated that the ‘only people interested in this language are the avowed enemies of Northern Ireland’. The reader might gain some appreciation of the effect of such bigotry, if we consider that more Irish was taught in the six-counties’ state schools in 1920 than in 2020.

Under this oppressive atmosphere, activists struggled clandestinely within ‘hidden ulster’ and were often interned without trial and held in inhumane degradation, such as those on the Prison Ship Argenta in the 1920s. Sinn Féin members of Stormont, the new parliament, were removed and imprisoned for speaking Irish in the chamber, and language activists were arrested for erecting bilingual signs in every decade of the 20th century up to the peace process. In this hostile context however, activists continued to organise feiseanna (a traditional Gaelic arts and culture festival) and night classes to help preserve the linguistic chain, stretching back, unbroken, over thousands of years.

These community-led efforts bore significant fruit when in 1969 a cohort of pioneering, working-class activists established their own Gaeltacht in West Belfast, a small area where activists built their own houses with a view to constructing an Irish-speaking urban enclave. Having built their own houses, the seven young couples wrote to the Department of Education that same year expressing their wish to establish an Irish-medium primary school for their children. The department responded that any such endeavours would lead to their arrest and imprisonment.

Thankfully, they ignored these threats and initiated a community-led revival which has gained international attention and transformed the lives of tens of thousands of people. By the time the school opened in 1971, the state had more pressing concerns as the civil rights movement, demanding equal rights in the areas of voting, jobs and housing, was met with violent state repression and Stormont teetered on the brink of collapse. Irish language activists and the modern northern revival in general are rooted in those same working-class communities – communities which have been at the short end of inter-generational discrimination and marginalisation. 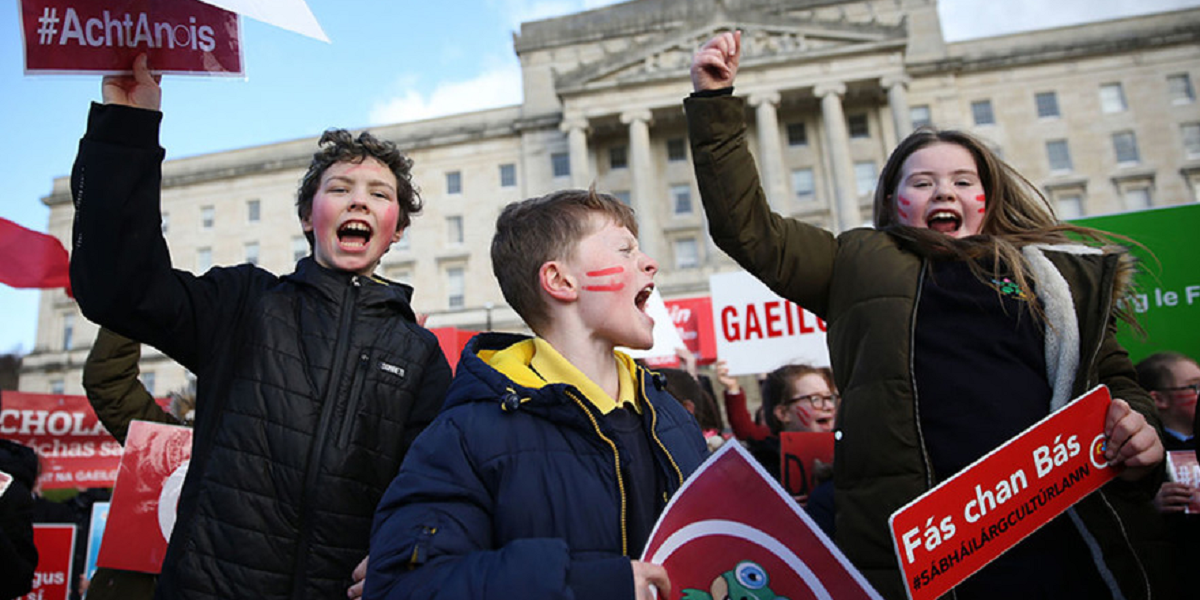 Many of those who came through the burgeoning Irish education system, denied state recognition and funding for many years, reached adolescence amidst the post-Good Friday aspirational commitments around rights. They lost little time demanding that Irish too be ‘brought in from the cold’ as part of this new dispensation.

In 2006, the British Government committed to introducing an Irish Language Act. Unionist opposition, however, led to fifteen years of obstruction and obfuscation that was rooted in outright bigotry. In response, the organic, autonomous Dream Dearg campaign, led by young Irish speakers, forced the language issue to the very centre of the political debate.

The cynical removal of a means-tested Líofa grant, which supported young people to spend time in the Gaeltacht areas of Donegal, by the DUP Minister Paul Givan was the catalyst for the movement. The language used by the DUP, and other unionist political and media voices, in resisting change did more than anything else to drive it and increasingly left political unionism isolated on this issue.

In response, activists demanded that those parties that had stated their support for the campaign demonstrate that support by refusing to take part in a government that facilitated the discrimination of Irish speakers. In March 2017, Sinn Féin, the largest nationalist party agreed to make the Irish language act a ‘red-line issue.’  Additionally, other parties that had up to then been ambivalent on the issue, such as the Alliance and Green Party, firmly came out in favour of the campaign.

The campaign intensified for three years, with young people to the fore, leading finally to the historic recognition afforded in the New Decade, New Approach deal of January 2020.

While falling short of the legislation demanded by campaigners, this provided a solid foundation to build upon in the years ahead as an increasingly assertive, confident generation of young Irish speakers continues to demand equality and respect in an Ulster, where the vestiges of colonialism and bigotry are beginning to be consigned to the historical dustbin. Where the Irish language gains acceptance as a precious cultural heritage open to all. There can be no going back.

Ciarán Mac Giolla Bhéin currently works with Comhairle na Gaelscolaíochta to support the development of Irish Medium Education. He is a leading advocate on language equality and led the successful Dream Dearg movement culminating in the ‘Dearg le Fearg’ march which brought 15,000 people to Belfast City Hall in June 2017.