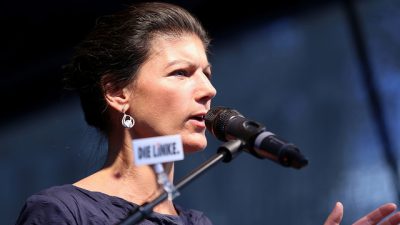 4 September 2018 A prominent face from Germany's hard-left party wants to take on the right. But her stance on migration is proving divisive. Ella Joyner reports.

8 November 2012 Emma Dowling speaks to Katja Kipping, new co-chair of Germany's Left Party, about the European crisis and the direction she wants to take the party

24 September 2007 The past few months have seen a wave of repression unleashed in Germany. Houses, offices, social centres and bookshops have been raided by police and several people accused of 'membership of a terrorist organisation' - sometimes for as little as having written academic texts about 'gentrification'. Frank Meyer reports from Hamburg

1 January 2004 In the decades following the Second World War, Federal Germany established a social-welfare state which brought a measure of social security to the broad mass of the population unprecedented in German history. The German model also ranked highly in international terms.

Whatever happened to the German Greens?

1 August 2003 Back in the early 1980s the West German Greens were a bastion of radicalism, challenging US imperialism, advocating pacifism and describing their own position as one of 'ecological socialism'. By the late 1990s the party seemed to have changed beyond all recognition: as a member of Gerhard Schroeder's 'third way' coalition, the Greens were defending radically neoliberal policies and staunchly supporting military interventions for humanitarian purposes.