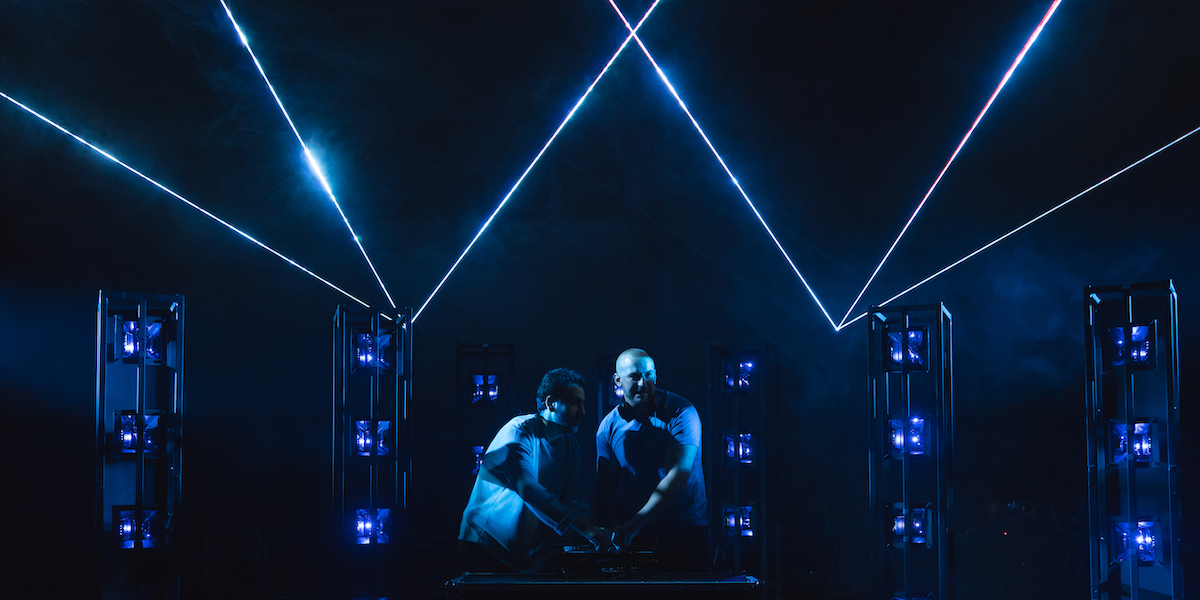 Mo’min Swaitat and Alex Eley in I Have Met the Enemy (and the Enemy is Us). Photo: Christopher Nunn

When you tell people you make political theatre, they generally think you mean big banners and big statements that tell people what to think. At Common Wealth, our Bradford-based, site-specific theatre company, we’re happiest when there’s space in our shows, when it’s a bit disorientating for the audience, a bit abstract. We don’t aim to spell everything out; there’s no linear narrative. People and politics are complex and we try to rest well in that complexity.

For us, our work isn’t here to tell people what to think but to shake it all up. We don’t always necessarily know what to say or do in this ever- changing world, but we know we don’t want to switch off.

Our recent play, I Have Met the Enemy (and the Enemy is Us), is about the arms trade – a subject where we can all acknowledge that something is wrong. There are still many people who make the pro-jobs or the ‘if we don’t sell them, someone else will’ argument. Even so, it’s likely that a lot of them feel that something about a global arms trade and increased weapons sales to Saudi Arabia – making the UK, this small island, the second biggest arms dealer in the world – just isn’t right. Yet we all go about our normal lives, benefiting from the economy brought in by the arms trade, the fancy institutions, the banks. The UK arms trade is a key part of our economy and we are largely silent or in the dark about it.

The play opens with a mock arms fair. Audience members are given ‘champagne’ (empty cups) and canapes (grapes from a box). Our cast tells them about drones fired from shotguns (real) and devices that can get rid of someone just by thinking about them (invented by us). We wanted the experience to feel completely surreal and absurd – like arms fairs themselves.

My biggest pride in that scene is how it also felt strangely normal – how much it reminded me of cultural events in the art world. Every art conference I’ve ever been to has all the same hallmarks – fruit kebabs, expensive buffet, speeches, awkward chit chat – reflecting an industry filled with people on salaries often far removed from those they aspire to work with. At Common Wealth, we aim to capture how people find themselves aligning with spaces and ideals that they know aren’t right.

If political theatre is for anything, it is to shake us up, shift us away from the status quo that tells us to accept things as they are, not disturb them, keep quiet, don’t challenge. A young person we worked with recently told us that, during her theatre degree, she was told that her work was ‘too political’ and advised that she should try to create a ‘safe space’ with her performance. Her work was about rape culture. So of course we must ask: safe for whom? Safe for people to carry on as they are, to not speak up, not call out injustice? To not rock the economy? To calm down and keep quiet? How many times have we all been told that?

Theatre can allow you to travel to places where we see the world – and each other –differently. In I Have Met the Enemy, the ‘arms fair’ opening breaks into a performance where people play themselves. Alex is a former soldier who has served two tours of Afghanistan, Mo’min is an actor from Palestine who grew up under military colonisation, Shatha speaks to us via video from Yemen and shares her stories of painting while rocket strikes shake her house. This honesty is set against the backdrop of 72 robotic, wirelessly controlled metronomes created by designers Robbie Thomson and Jamie Grier, creating a landscape of sound and light. It’s this technology alongside the very human that makes the piece shudder for us.

The honesty of people playing themselves is disarming. It means you see them, you see yourself, you see your brother and your neighbour and your mum. And seeing each other, hearing ourselves, feels very political in a media and political class dominated by lots of people who look and sound the same making all the decisions.

We’re passionate about making theatre that represents and speaks to working-class experience. I Have Met the Enemy is performed in sports hall and community centres. We’ve also made work in boxing gyms, tin works, disused residential houses. In our experience, people who are new to theatre are often the most open-minded to experimental performance – and the ones having the most political conversations and wanting things to change.

With all our work, we’ve felt a ripple quality – the thoughts and ideas of the shows ripple out beyond the audiences who see them. Anyone engaging politically with the world and wanting change is making these ripples. And all these ripples build up and start to make connections. And these ripples, this disruption and shaking up of what we’re led to believe is ‘normal’ is, hopefully, the culmination of letting us imagine what else is possible.

Evie Manning, along with Rhiannon White, is co-artistic director of Common Wealth, currently working on a new production, Peaceophobia, and on finding ways to keep working during Covid-19.