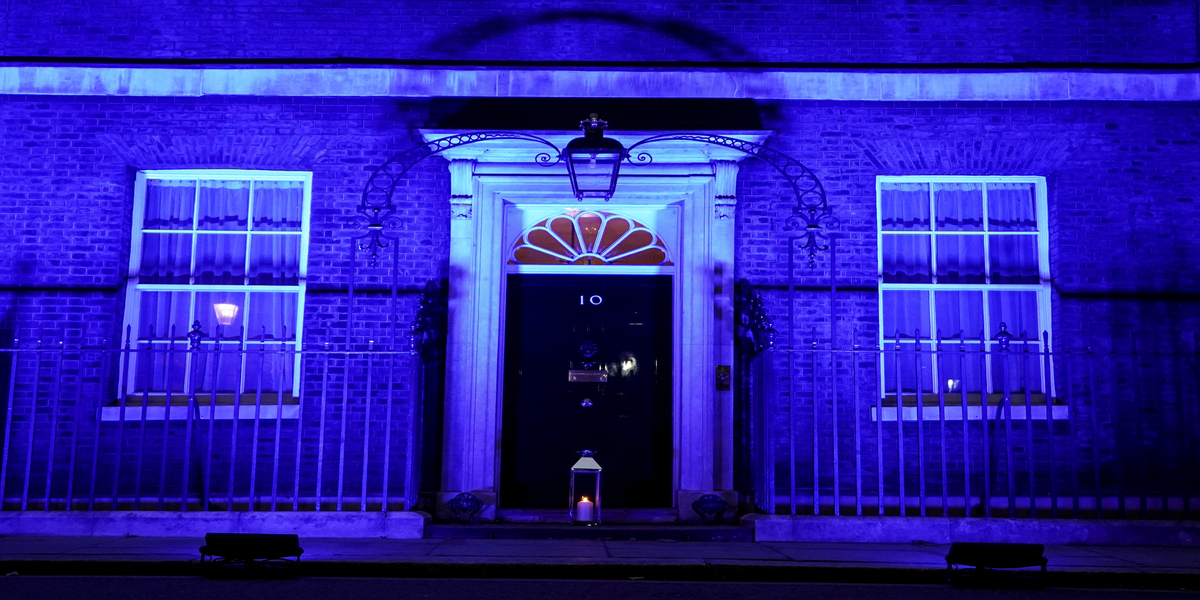 On 4 July 2020, Number 10 Downing Street lit up to celebrate the NHS 72nd anniversary. Picture by Pippa Fowles / No 10 Downing Street. (CC BY-NC-ND 2.0)
This is part two of our two-part exclusive interview with Sir David King, former chief scientific advisor to the UK Government. You can read part one here.

Hilary Wainwright: There is a similar conflict between market-driven economics and health. So does ‘independent advice’ mean advice that puts the public good first? Is there a sense in which independence has got an ethical dimension?

Sir David King: No question about it. The key is that your advice is given without being sensitive to what particular ministers or the prime minister would like you to say. That’s the critical thing about independence. Having public trust, in the middle of an outbreak like BSE, foot and mouth disease and Covid-19 is critical. Public trust in science is critical.

At the moment, I don’t believe we have public trust in the government. I think that has been lost – for several reasons. One is that the prime minister does not stick to the truth – he says what he thinks is convenient.

For example, telling us that we would have ‘the best app in the world’ for tracing the contacts of people who have the virus, when there was no sign of that emerging. In the same way, giving the test and trace process to a private company that had no health experience at all – how can we expect that to work in a crisis? We need to know where the disease is emerging, who the contacts are, and putting them into isolation. Our local healthcare system, nurses in schools, hospitals, GPs, was ignored in favour of Serco, a private company. If money poured into Serco had been invested in public healthcare, we estimate that within three days we’d have had a full test-and-trace system up and running.

The public has no trust in the public domain because they can see that there is a difference between the rhetoric – ’It is all functioning fine’ – and what is actually happening.

HW: So, if Tony Blair had responded to your advice by saying, ‘No, that doesn’t suit our economic objectives’, you would have spoken out?

SDK: I would definitely have spoken out. A science adviser, in the face of a crisis like this, cannot hold back from looking at every aspect of the crisis. The sooner we had acted on this epidemic by going into lockdown, the sooner we would have come out of lockdown, the better it would have been for the numbers of deaths, and the better it would have been for the economy. There is no necessary conflict at all. The only way it could have been a conflict is if the prime minister decides that it’s worth two to three hundred thousand dying not to close the economy down.

The prime minister believed in the herd immunity programme. In other words, if there are enough of us who have had the disease, we’ve got the antibodies and the disease can no longer spread. Enough means about 70 per cent. It’s like a vaccine. You’ve got the antibodies and the disease is just wiped out. That, of course, was how the plagues were eventually wiped out, but the human cost was enormous. Now the chief scientific adviser, Sir Patrick Vallance, did say in one of his press briefings, with the approval of the prime minister standing on his right, ’With herd immunity, it is likely to take a while but we will eventually come out of it.’

HW: Did he admit that it would be at the cost of tens of thousands of deaths?

SDK: The prime minister said, ‘We have to be prepared for losing some of our loved ones, every one of us has to be prepared.’ So, there was that expectation. They consciously allowed the disease to spread.

There was the football match up in Liverpool in early March against a team from Spain. Spain had the epidemic, massively, and we allowed the crowds into Liverpool to attend that match, British and Spanish crowds. It was the best possible way to make sure that it was spread in the country at large. Then we had the Cheltenham races on 10-13 March with a quarter of a million people there – another wonderful way for an epidemic to spread. That was a formula for us to all quickly get immunity by having the disease.

The problem was a delay period before they actually pushed the lockdown button. In that period of time, we all knew that the epidemic was doubling every three to four days. So, in one week it was quadrupling. My analysis was that if they had just gone into lockdown one week earlier – when they began discussing the Ferguson paper [predicting that around 250,000 people would die if we didn’t go into lockdown] we would have a quarter of the number of deaths that we have today. It’s going to turn out to be 40-50,000 unnecessary deaths in this country – unwarranted, a complete cock-up by government.

I should add that I don’t believe there is any intention now of trying to reduce the number of new infections per day in England below the current figure, because they are saying the NHS is coping. You’ve got to understand, the NHS is only coping by not doing its normal work. People who need urgent operations are not able to get them, so we’ve got another 20,000 early fatalities of people who should not have died. We are really shortening lives in a dramatic way.

HW: What was SAGE saying about the lockdown? Was there a debate on SAGE? Do we know?

SDK: Yes, the minutes are very clear. The minutes say that Ian Diamond, a biologist from Scotland, was brought in because of, and the wording is really important, ‘a breakdown of the relationships in SAGE’. In other words, there was a crisis of self-confidence among the members of SAGE and Ian Diamond was brought in as someone who could nurture everybody. I think SAGE was kind of falling apart.

HW: Would you like to be chief scientific adviser at the moment?

SDK: No, not with this government. I couldn’t do the job without independence and being able to maintain my integrity. For any scientist – or social scientist or whatever – integrity is everything.

SDK: With open, honest transparency from government – not a process controlled from Number 10. It’s very, very difficult to see how this could possibly happen with the current government.

I would like to see the emergence of a process in which we see a new form of democracy emerging – in which local communities really have a significant say in the processes of government. As we emerge from this epidemic, there is an opportunity for us to do quite a few important things. An opinion poll in late June said the vast majority of British people do not want us to return to where we were. We’ve discovered a different world in this lockdown.

I want to see us focusing on areas that are fit for purpose in the 21st century. Infrastructure investments have got to be green. We need to deliver a zero-carbon economy as quickly as possible. We need to see that we deal with poverty in this country at a level that we haven’t managed since the Forties and Fifties. The way this disease is impacting so severely on the deprived communities shows up just how bad this is.

Since May 2020 Sir David King has been director of the Centre for Climate Repair: climaterepair.earth

While the government has given up on its regular press briefings, Independent Sage is stepping up to the plate, every Friday at 11.30am. Follow them live on Twitter. Recordings of past sessions are also available.

The full version of this interview appears in issue #229 ‘No Return To Normal’. Subscribe today to get your copy and support fearless, independent media.