With the Tories still setting the political agenda in the run up to the election, Alex Nunns examines what a Cameron government might actually have in store for us

Did you know that you are about to enter the ‘post-bureaucratic age’? No? Perhaps you should prepare – stock up on tinned food, bottled water, survival suits. Because if the Tories win the next election they are not only promising a change of government but a change of epoch.

The ‘post-bureaucratic age’ is the Tory leadership’s grand theory, their version of Blair’s third way. It is presented as the idea that links Cameron’s anti-state rhetoric, his new-found love of localism and the detail of policies from education to regulation. But the thinking is riddled with contradictions, and if the Conservatives triumph the country may strain under the weight of them.

With such a dull name the new epoch is never likely to be as popular as, say, the Stone Age, but the post-bureaucratic age comes with its very own narrative. In the beginning people didn’t have the internet or even mobile phones, so no one knew what anyone was doing. They were pre-bureaucratic. Eventually the telegraph was developed and the bureaucratic age was born. This was okay; it brought progress and suited us all pretty well right up until John Major’s government fell. But then came Gordon Brown, and life wasn’t worth living.

By this time, however, the internet had been invented, allowing everyone to know what everyone was doing. Bureaucracy became unnecessary because, as Cameron puts it, ‘the argument that has applied for well over a century – that in every area of life we need people at the centre to make decisions on our behalf – simply falls down.’ All that was needed was a Tory government and Lo! the post-bureaucratic age would be upon us.

You see, David Cameron has a vision. Either that or a highly developed sense of irony. He looks at the way neoliberalism nearly died from gluttony after being freed from the nagging restraint of the state and concludes, as any rational person might not, that the state got us into this mess. His ‘post-bureaucratic’ solution is more neoliberalism.

The recession has had an odd impact on Cameron. Before the crash he wasn’t too worried about public spending. In fact he put much of his energy into fighting his own party over the issue, pledging to match Labour’s spending in key areas. But after global capitalism crumpled, Cameron decided that domestic public spending was to blame, and pretended he had always said so.

Cameron and Osborne now present the problem as public debt, rather than recession. Their solution is a quick and sharp reduction in spending. Many economists believe this will be a disaster that will tackle the symptoms of the crisis while aggravating the cause, but it means that if elected the Tories will have a mandate to cut.

At the Conservative conference in October, Osborne declared ‘we’re all in this together’ before singling out public sector workers for a pay freeze. The measures he outlined totalled around £7 billion of ‘savings’, a fraction of the £70-80 billion needed to tackle the debt on the Tories’ timescale. The cuts will be huge.

Cameron has pledged that spending on health and international development will continue to grow. Education, the home office and defence will probably be shielded. That means that welfare will bear the brunt. The first step will be to throw 500,000 people judged capable of work off incapacity benefit and onto jobseekers’ allowance, worth £25 a week less. The whole benefits system will be made harder to access, and money will be withheld from anyone who refuses job offers.

The Conservatives describe this policy as ‘tough and tender’. Tough and tender. Like nasty and compassionate. It’s fishy and fowl.

But here’s where the post-bureaucratic age comes into its own. The unemployed will be freed from ‘bureaucracy’. The task of finding them work will be privatised, with companies being paid a premium if their ‘client’ stays in work for a year.

There’s just one flaw. This is a policy that will work best when it’s not needed, and badly when it is. In a recession, jobs don’t exist to get people into, especially if the Tory spending squeeze keeps unemployment high. Private firms will be reluctant to take part. Inevitably the terms will have to be skewed in their favour, and the whole thing will cost a fortune.

The Tories stole the policy from Australia, where it worked so badly that the government had to tighten regulation because of fraud and market failure. The result was more bureaucracy and cost.

Privatisation and bureaucracy – this turns out to be characteristic of the post-bureaucratic age. The Conservatives claim they will reduce the cost of NHS bureaucracy from £4.4 billion to £3 billion – figures that bear no relation to the real cost, which under New Labour has been hyper-inflated by market reforms. Pointless tendering exercises, contracts, lawyers, billing and now even NHS advertising have diverted uncounted sums of money. Yet the Tories will go even further with ‘true payment by results’ – paying hospitals according to health outcomes, not activity. Imagine the bureaucracy needed to grade the success of every procedure and allocate funds accordingly.

In a post-bureaucratic world, Cameron says, centrally run services will be replaced by ‘local control over schools, housing, policing’. But Cameron shares the Thatcherite notion that consumer choices are equivalent or preferable to democratic ones.

So in education all schools will have the chance to become academies. Local authorities will be sidelined in the name of localism. Academies will be run by faith groups, charities, companies or parents. Tory spin has focused on the latter, but after initially saying academies would be non-profit the Conservatives have revealed they will allow the running of schools, including teaching, to be outsourced. Companies will be able to charge a management fee and make a profit.

Since planning is an idea from a previous epoch, academies will be allowed to open even where there are surplus school places. There will be competition for finite resources. For every winning, profitable ‘local’ academy there will be a local comprehensive loser.

Despite the talk of localism, shadow education secretary Michael Gove plans to micro-manage from the centre any area of school policy he feels strongly about. He is particularly concerned that all pupils must wear a tie; ex-soldiers will be recruited to enforce discipline; a propagandist version of British history will be taught; and he will personally sack bad headteachers.

The new Conservative rhetoric sets great store by local government. Osborne has said: ‘When it comes to rooting out waste and cutting costs or improving services through innovative new policies… Conservative Whitehall will have much to learn from Conservative town halls.’

If we take him at his word it seems the country will be run like a budget airline. Conservative controlled Barnet has branded itself ‘easyCouncil’. Its leader Mike Freer, a banker, has adopted Ryanair’s business model and told residents not to expect services to be comprehensive.

Instead, in social care, recipients will be given a budget and told to choose whether they want to use it for help with, for example, shopping or cleaning. Freer showed how seriously he takes social care when he said people could spend it on a weekend in Eastbourne if they want. The no-frills strategy also involves Ryanair-style extra charges for priority treatment, such as jumping the queue for a planning application. And Barnet aims to privatise as many services as it can.

The goal is lower council tax, but vulnerable people will pay the price in lost services. Freer has already tried to cut live-in wardens in sheltered accommodation, but in a possible glimpse of the future the plan has been halted after residents (who are presumably local people too) took it to the courts. Another threatened area is social housing. Stephen Greenhalgh, the leader of Cameron’s favourite local authority, Hammersmith and Fulham, has proposed ending social housing as we know it by putting council house rent up to market levels then offering means-tested housing benefit. He wants to end secure tenancy and bring back a partial right-to-buy with a moralist twist, saying: ‘We want to give tenants the right to acquire “free equity” of up to 10 per cent if they are good tenants, and the right to buy up to 25 per cent of their home on a “buy one get one free” basis.’

The closer you look, the more the post-bureaucratic era resembles the Stone Age after all. There are plenty of opportunities for Labour to attack, yet Brown and company are consistently missing them.

Key Conservative proposals won’t work because they are only extensions of New Labour policies that don’t work. For all the bluster about Brown’s statism, Labour is heavily implicated in this ‘post-bureaucratic’ dystopia. Market reforms in the NHS have prepared the ground for the Conservatives.

The ‘tough and tender’ benefit reforms are an extreme version of James Purnell’s policies (introduced before his entirely principled resignation). Even the plan for profit-making state schools is inspired by the example of a London secondary run by an American firm with the current government’s blessing.

Most significantly, Labour has accepted the Conservative focus on the deficit, not the recession, with Brown pathetically announcing cuts of his own after seeing the positive reaction to Osborne’s conference speech. The government has left itself with little in the armoury to fight the election.

So buy plenty of tinned food and bottled water, and brace yourselves for the new epoch. 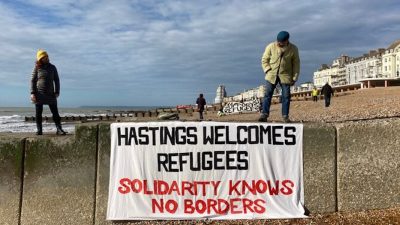