Rolling back the new 'common sense' of spending cuts may seem like a difficult job, but it's not impossible, says Mike Marqusee

It’s now clear that cuts in public spending, and resistance to them, will be the stand-out issue in domestic British politics during the coming years. The three major parties, the mass media (from the Mail to the Guardian, BBC to talk radio), think-tanks and pundits, not to mention the OECD, all insist that large-scale cuts must be made, that they are the only way to address the projected gap between state revenues and spending, and that this gap is the number one problem facing the British economy.

It’s been a remarkably deft manoeuvre. In less than a year, a system-challenging global financial crisis has been turned into a tussle over national bookkeeping. The problem has been redefined as an allegedly unsustainable public debt, rather than an economic recession brought on by demonstrably unsustainable private debt.

The ‘hole’ in the public finances that has occasioned so much hysteria is the result, not the cause, of the economic crisis. The public sector did not create the hole (that was the work of the banks) and it does not follow that cutting public spending is the way to fill it.

There are, of course, savings that might be welcome but will not even be considered. Getting out of Afghanistan and Iraq, cancelling Trident, ditching ID cards, ending exorbitant payments to outside consultants, curtailing the number of people we imprison – all these together would go some way to reducing the deficit. Even more progress would be made by increasing taxation on corporate profits and individual wealth.

The fact that such options are being ignored suggests that closing the deficit is not quite the ineluctable, non-negotiable priority its proponents claim. The cuts policy is not a matter of economic necessity but of political choice – in this case, the wrong choice.

Public sector cuts will lead to fewer and poorer public services at a time when more people are in greater need of them. They will entail huge increases in unemployment and casualisation, which will weaken workers in the private sector, reduce overall economic demand and thereby renew and deepen the recession. As numerous economists have argued, what’s needed now is exactly the opposite: greater stimulus, job creation and increased demand.

What’s been involved in this manoeuvre is a massive transfer of responsibility, moral and fiscal, from speculators and manipulators of debt to the general public. Despite its flimsy intellectual foundations, it has secured widespread acceptance. A dispiriting example appeared recently in the Guardian, which headlined a spread on the current distribution of UK public spending with the question ‘What would you cut?’

The Tories’ con-trick has worked partly because Labour subscribed to it, but also because it accords with popular mythology, with a consciousness generated by three decades of neoliberal ideology echoing in every corner of our culture. The litany is familiar: individualism, consumerism, disbelief in collective change. All this, unfolding amid the violent instability of our times, has bred a lack of compassion and empathy, a knee-jerk readiness to blame victims and a suspicion of appeals to solidarity. In defending the public sector, we’re challenging not just three parties but three decades of moralistic neoliberalism – a system that evacuates ethics from its functional core while setting itself up as some kind of moral categorical imperative.

We need to expose this ‘common sense’, however deeply embedded, as self-serving nonsense.

Thatcher liked to compare the national economy to the individual household, where everyone knows that you can’t spend more than you earn. Leave aside the fact that households regularly borrow many times their annual earnings in the form of mortgages, or that the Polonius-style lecturing might be more fairly delivered to the bankers – the analogy is bogus at the root. As Marx explained, and most capitalists know, the national debt was the engine of modern capitalism, and credit was the necessary fuel of capitalist growth.

Tragically, the public sector as a whole has come to be regarded as an optional extra, whereas, in fact, public sector workers reproduce the framework required for modern economic activity, for the existence of our society. In the deeper sense of the word, they, and not the bankers, are the ‘wealth creators’.

The cuts will be driven by the propagation of artificial divisions between ‘frontline’ and ‘bureaucratic’ public sector employees, between ‘productive’ and ‘unproductive’ workers, between the deserving and the undeserving poor. Misplaced popular resentment against public sector workers, an expression of envy, fear and denial of shared social dependency, will be exploited to the hilt. Public sector workers are being portrayed as enjoying a cushy life, over-protected from the economic maelstrom the rest of us have to face. In fact, they are paid less than their equivalents in the private sector, their pay has grown more slowly than in the private sector, and those infamous public sector pensions are actually worth on average £7,000 a year.

The deficit is not apocalyptic. Historically, in comparison with other countries, and in light of the needs of the hour, it is not excessive. Despite the scaremongering, there is no reason to believe that it cannot be financed. It will diminish as the economy grows, as long as that growth is not of the lop-sided, top-heavy type that helped precipitate the crisis in the first place. Redistribution and recovery must go hand in hand. That’s not just a moral aspiration, it’s an economic necessity.

‘Welfare scroungers’, ‘feather-bedded bureaucrats’, the ‘evils of debt’ – the arguments and stereotypes of the 1970s are being recycled. In the middle of that decade, a redistributive Labour government, faced with a global economic downturn, submitted to IMF demands for cuts in public spending. The volte-face split the labour movement and led to a wave of public sector strikes. The media hammered public sector workers while Labour leaders lectured the movement about the non-negotiable necessity of shrinking state spending. What was true, then as now, was that the cuts and wage freezes were needed not to stave off bankruptcy but to restore the profitability and privileges of capital. The upshot was the election of Margaret Thatcher in 1979.

Although you wouldn’t know it from many portrayals of the era, the 1980s witnessed protracted local and sectoral struggles against public sector cuts. Central to Thatcher’s ambitions was an attack on local government powers and spending. This required not only squeezing councils’ allocation from central funds but restricting their local revenue raising powers.

What came to be known as ‘rate-capping’ was an attempt to force Labour-led authorities – centres of resistance to Thatcherism – to impose cuts on their own constituencies. A plan of resistance, relying on refusal by Labour councils to implement rate-capped budgets, was mapped out and agreed by Labour parties, trade unions and community organisations. The ensuing struggle coincided with and was profoundly influenced by the course of the miners’ strike. In the end, the bulk of Labour councillors broke ranks, with the support of party and trade union leaders, and opted for what they dubbed the ‘dented shield’ approach (because it was, they said, better than no shield). They became transmitters and enforcers of Thatcher’s claim that There Is No Alternative.

Not surprisingly, in this context, resistance was fragmented and isolated. We were told that nothing could be done until we had a Labour government at Westminster. By the time that happened, both local government and the Labour party had been gutted.

A problem we faced, then as now, was the inadequacy and poor quality of many public services. The reality may be ludicrously misrepresented, but those whose experiences with public services have been frustrating are inevitably reluctant to spring to their defence. Part of the answer to that is to expose who are the real losers and winners in the cuts programme. Another part involves tying opposition to particular cuts to positive support for enhanced and accountable public services in general.

While we have to fight the cuts on a case by case basis, we won’t win unless we do more than that. If we fail to expose the illogic and dishonesty of the cuts strategy as a whole, resistance will be blunted. We need to mount a confident challenge not only to the three-party-media consensus on the cuts, but to the economic imperatives of neoliberalism. A good example of exactly what not to do came from TUC general secretary Brendan Barber, who commented: ‘We need a proper debate about making public services better in an age of austerity … There is nothing wrong in looking for these savings. Undoubtedly, there is some waste around.’

Any time you set out to bust the straitjacket of common sense, you’re in for a formidable battle, but certainly not, in this case, an unwinnable one. Precisely because their impact will be so widely distributed, the cuts will generate large forces of opposition, including from hitherto passive quarters. From the left’s point of view, every victim of the cuts – public sector worker or public service user – should be a potential resister. It’s our job to make sure people are not left alone in their victimhood, struggling for personal survival without hope of social change.

Though it is necessarily defensive, insofar as this opposition insists on a change in social priorities, it has the potential to unveil possible futures, to remake a desolate political landscape.

Mike Marqusee’s column, Contending for the Living, appears regularly in Red Pepper. His other writing can be found at www.mikemarqusee.com 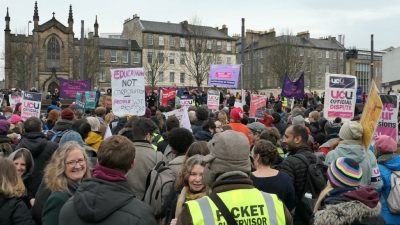